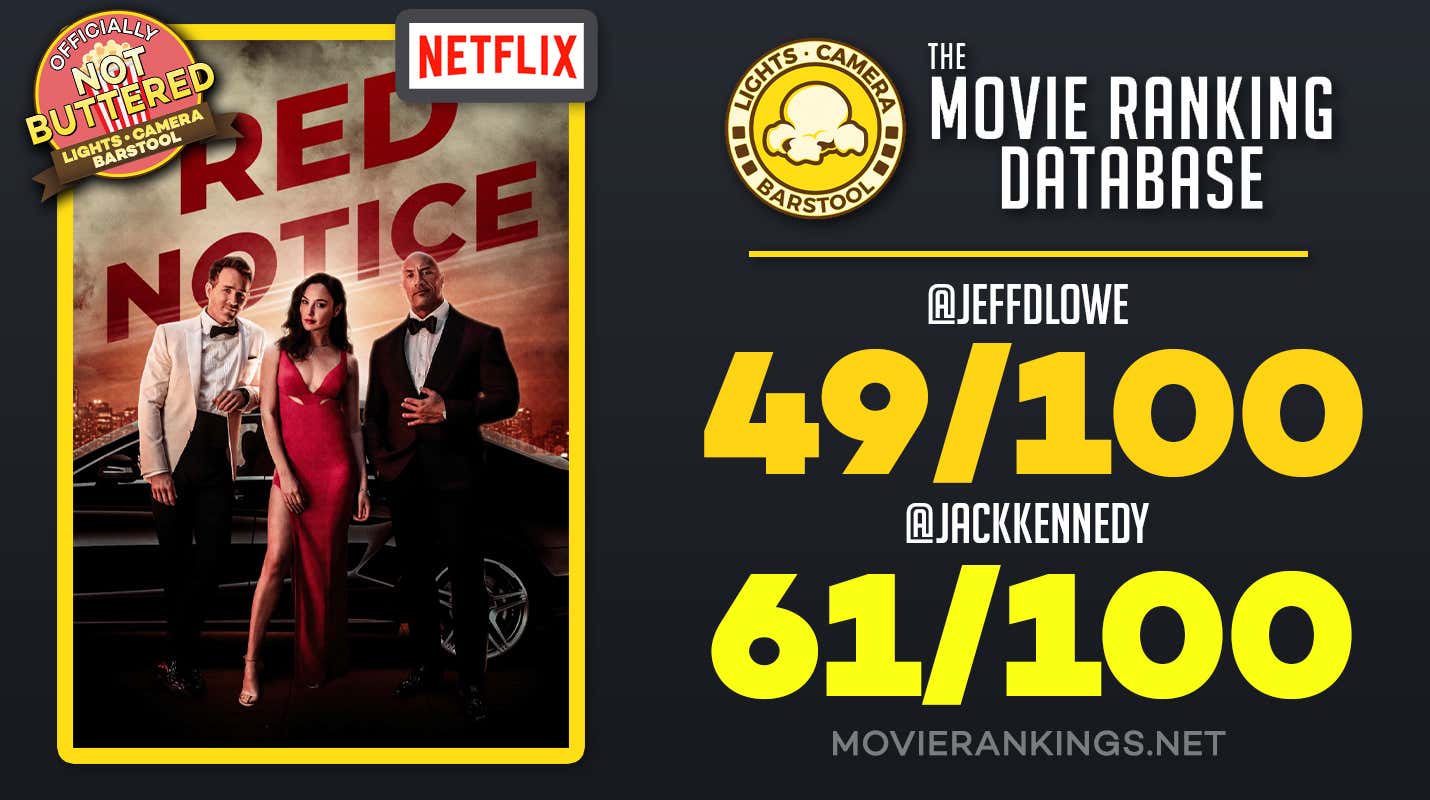 Netflix's "biggest movie ever" is finally here and… it's exactly what you'd expect!

An Interpol-issued Red Notice is a global alert to hunt and capture the world's most wanted. But when a daring heist brings together the FBI's top profiler and two rival criminals, there's no telling what will happen. (via MovieRankings.net)

JeffDLowe (49/100): Close your eyes and dream up what you'd expect from a Netflix action-comedy starring Dwayne Jonson, Gal Gadot, & Ryan Reynolds. Whatever you imagined, is exactly what you get with Red Notice. While it may be entertaining in some spots, it certainly isn't a good movie.

- A movie that feels like it was produced in a "blockbuster" lab at Netflix HQ
-- All of the cliches and tropes you'd expect are present in the movie
- The cast does have pretty solid chemistry, and that keeps it afloat at times
-- But this also disappoints me in a sense that a good script might've made this awesome
-- The movie plays it safe in the sense that it is appealing to a super broad audience
-- With that said, I do think there was an area they could have attacked to make it more complex
- If you are sick of Ryan Reynolds' "schtick" or comedic style, you'll hate this movie
-- His comedic timing and delivery clearly works for him, but it is becoming a bit stale
-- I'd love for someone to give him a bit of a different set of dialogue, or even character to portray
-- The can probably be said about Dwayne Johnson, but to a lesser extent
- Nothing about the story feels fresh, and the action sequences feel very "run of the mill"
-- Even the twists and turns didn't surprise me, but some have said they saved the movie…
-- …so, as always, that type of thing is in the eye of the beholder (or viewer)
- Chris Diamantopoulos' character has the most ridiculous voice and accent
-- He sounds like a mix between the original Dumbledore, and Voldemort
-- It is one of the worst character voice decisions I've ever seen in a movie

Again, this movie is definitely entertaining at times, and it is worth a play on Netflix if you need a turn-your-brain-off action-comedy. But don't expect much to blow you away, except for maybe the realization of wasted potential given the stars in this movie.

Ryan Reynolds plays Ryan Reynolds, The Rock plays the Rock, and Gal Gadot plays Gal Gadot. Nobody is out of type or trying to do anything beyond what you are used to from them. That might be a bummer to some but I think it’s exactly what the Netflix head honchos want and your average Netflix user scrolling for something expects. There were two sour points for me as far as acting goes. I think the character of Sotto Voce doing a weird dumbledore-type voice was a bizarre choice. Also, this movie solidified my opinion that Gal Gadot is simply not a strong actress. She has the moves, the presence, and the look for sure. But she is just not that good at acting.

On the technical side, I liked the story, the twists, and turns, the level of self-awareness, and the action. It is a bloated carcass imitation of Indiana Jones, but even that is better than most of the garbage out there. I wish the ratio of CGI-practical effects was a little better because the green screen work was VERY apparent in any scene larger than a small room.

It’s not a movie where I’m going to go yell from the rooftops for you to watch it. But I think a lot of you can enjoy it for what it is, get some laughs, and appreciate some action.

--
The movie is Officially Not Buttered, but if you need a "turn your brain off" movie… go for it? Sure, go for it. You can head to Lights Camera Barstool right here to listen to our latest episode where we discuss it on our new episode.