Last night was the theatrical release of the film that is about to hit streaming, and was 35 years in the making. The film that no one asked for is here at last, thanks to the only man whose opinion on the matter counts, Sylvester Stallone. "Rocky IV: Rocky vs. Drago, the Ultimate Director's Cut" is the product of nine months worth of reedits that Stallone did while Hollywood was shutdown by Covid.

And while I kid about no one asking for this, that's not to say I didn't welcome it. Or that I'm not grateful to Barstool legend Uncle Buck for bring me and a group of our buddies to see the premiere at the theater Thursday night. For a lot of reasons.

First of all, because I agree with Stallone that the original "Rocky IV" is flawed. I've always felt that the first film is a gritty piece of 70s realism, but with elements of a hero's journey, and worthy of the Oscar that it won. The second is a serviceable sequel, but a scene-for-scene remake of the first. The next three are basically cartoons. As my friend Matty (who was sitting with) once put it, "Rocky IV" is when Stallone stopped trusting his audience. Like it's not enough to just imply the Commies are 'roiding up Ivan Drago; you've got to see the syringe get filled and the needle go into his arm. And that's one example.

In a live broadcast before the film came on, Stallone sat with TCM's Ben Mankiewicz and explained where he thought he went wrong and what corrections he wanted to make: 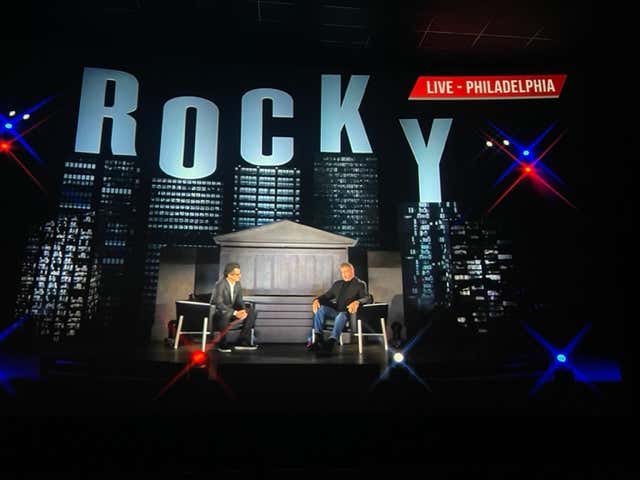 And it was everything this diehard Rocky fan wanted to hear. He admitted that the original was way too much of a product of its mid-80s time. Too many montages. Backlit scenes and lens flares and people walking out of smoke clouds. And most of all, too many robots. Which is to say, one. Which was way too many. Essentially he wanted to use the unused footage he had and make it less MTV (ask your parents and they explain what 1980s MTV was like) and more of an actual film. Fewer whistles and bells and quick cuts, and more scenes that have time to breathe. A study of these familiar characters that is more fleshed out. Including Drago himself.

And largely, he succeeds. Flat out, in my opinion, "Rocky vs. Drago" is a better "Rocky IV" than we're used to. If I had to quantify  it, I'd say it's 45% less silly. Parts of it just feel different, whether that's from toning down the music or smarter editing, it's hard to say. But the exhibition bout between Drago and Apollo has a kind of dread to it. Yes, I've spent 35 years knowing Apollo (spoiler) was walking into his own grave, but this time you feel it. Even through James Brown's "Livin' in America" number, it's more haunting than goofy. As Drago is being raised into the Vegas arena, it evokes King Kong being brought from his home and dropped into this alien world and you feel that same kind of pity for him that he didn't ask for it. It's something I never picked up on in the original, where he was just portrayed as a hunter-killer robot or whatever. And the fight itself feels more like a boxing movie, if that makes sense. More like something Scorcese or Eastwood would've directed than mid-80s Stallone.

And no character benefits from the new cut than Duke, played to perfection by the late Tony Burton. From his iconic "This guy don't know this is a damn show. He thinks it's a damn fight!" in the first film to his arc making him Rocky's mentor in the Russia scenes and his most GIF-worthy moment in the fourth:

… you realize that Duke has really been The Glue Guy of the entire Rocky franchise. And this new edit finally gives him the moments he deserves. His eulogy at Apollo's graveside is easily one of the great movie speeches of the last several years. And delivered so well you'll be astonished it never made the final cut. Afterwards, the guys I was with vowed to give the same speech at one another's funerals (though UB and I have already promised each other Kirk's speech about Spock at the end of "Wrath of Khan," and I expect you reader's to hold him to that), it was just that great a moment. It was great to see this character finally getting his due.

Some of the other changes involve eliminating some of the cringe moments. Bridgette Nielsen's speeches about the difference between East and West are cut down, thank God. The line where Rocky is saying goodbye to his son and the kid says "If a big man was trying to hit me, I'd sure be scared!" or whatever, is replaced with a beautifully written, poignant piece of dad advice that is an amazing foreshadowing of the speech that was the beating heart of "Rocky Balboa":

And no spoilers, but the speech at the movie's climax that brought an end to the Cold War and probably prevented a worldwide nuclear holocaust has been toned down and made far more genuine, as has a lot of what happens around it.

In all, it's an improvement. There's still some things I would've loved to have seen on the cutting room floor, but it seems like Stallone hasn't changed his opinion on driving around listening to power ballads or slow motion cutaways to people in the crowd going "Noooo!!!" But he's a man of vision. His whole life story, from starving, unemployed actor who believed in himself, risked everything and became a Hollywood superstar so mirrors that of the character he created, that he can do whatever he wants and I'm on board.

Overall I'm giving it a B+. With a reminder for everyone who produced mid-1980s cheesiness, that extra credit is always available.