[ESPN] - "When you hear things coming out from their camp, that we want to be [Mexico], where we're looking at some mirror that's Mexico and we want to see ourselves or something like that, it shows that we have a long way to go to get the respect of Mexico," Berhalter said. "The two victories in the summer I guess didn't do a lot to get that. We're going to have to do it [on Friday] by our play on the field."

Earlier this week, El Tri goalkeeper Guillermo Ochoa told TUDN: "Mexico was the mirror in which the [U.S.] wants to see itself and wants to copy" while adding the pressure is on the U.S. to win at home, rather than on Mexico breaking a two-game skid in the rivalry.

That's it Gregg. Show a little temper and get a little huffy. Pissed might not be the right word, but huffy for sure is. It's also not exactly a secret that tonight is a MASSIVE game for us. Yeah of course the pressure is on us to win at home, Ochoa. Pretty standard. You have to win at home in World Cup qualifying. Same goes for Mexico if they had the home match tonight.

Say what you want but this summer the US did beat Mexico with full rosters and beat them again with B/C rosters. That's two wins. That's two trophies. Now a win tonight not only basically solidifies we're at the same talent level as Mexico, if not higher, it puts us in a spot to qualify for the World Cup. Here's the current table. 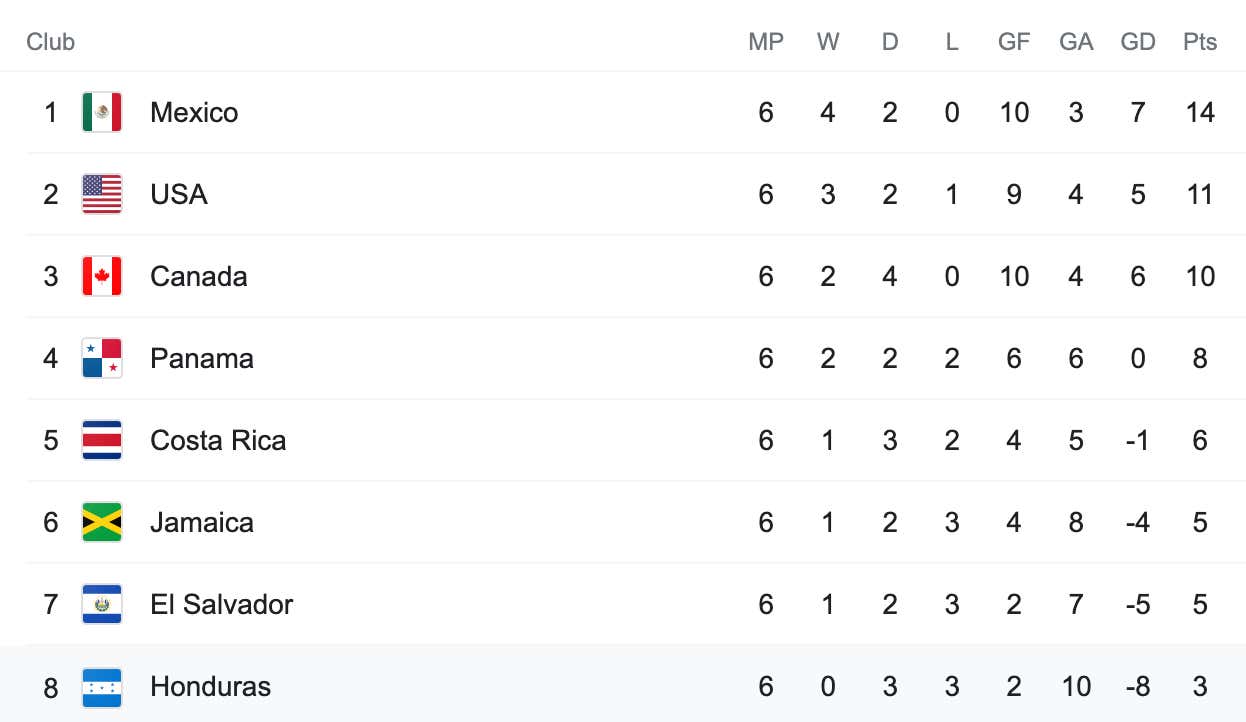 You play 14 matches, top-3 automatically qualify and the 4th place goes to a playoff. A win today puts tied for 1st while Canada plays Costa Rica and Panama goes to Honduras. If either of those teams lose and if Panama ties, we're sitting at least 5 points clear of 4th halfway through. That's ideal. I said it before but if we get 6 points in this window over Mexico and Jamaica, you can basically punch a World Cup ticket.

We should never try to be Mexico. That's dumb. We're the United States. We should try to be us - or at least a country that wins more than Mexico. Not like they tear up the World Cup. They haven't made it past the Round of 16 since 1986. Remember when we beat them in the Round of 16? That was awesome.

So yeah tonight's about respect. It's about going out and kicking Mexico's ass again. Christian Pulisic is coming off the bench. It's fine. This is where we need to show our depth with no Reyna or Dest. All I know is TQL Stadium is going to be insane tonight. I can't wait to get down there. If you're in the area/going to the match we'll see you there. It's about respect.