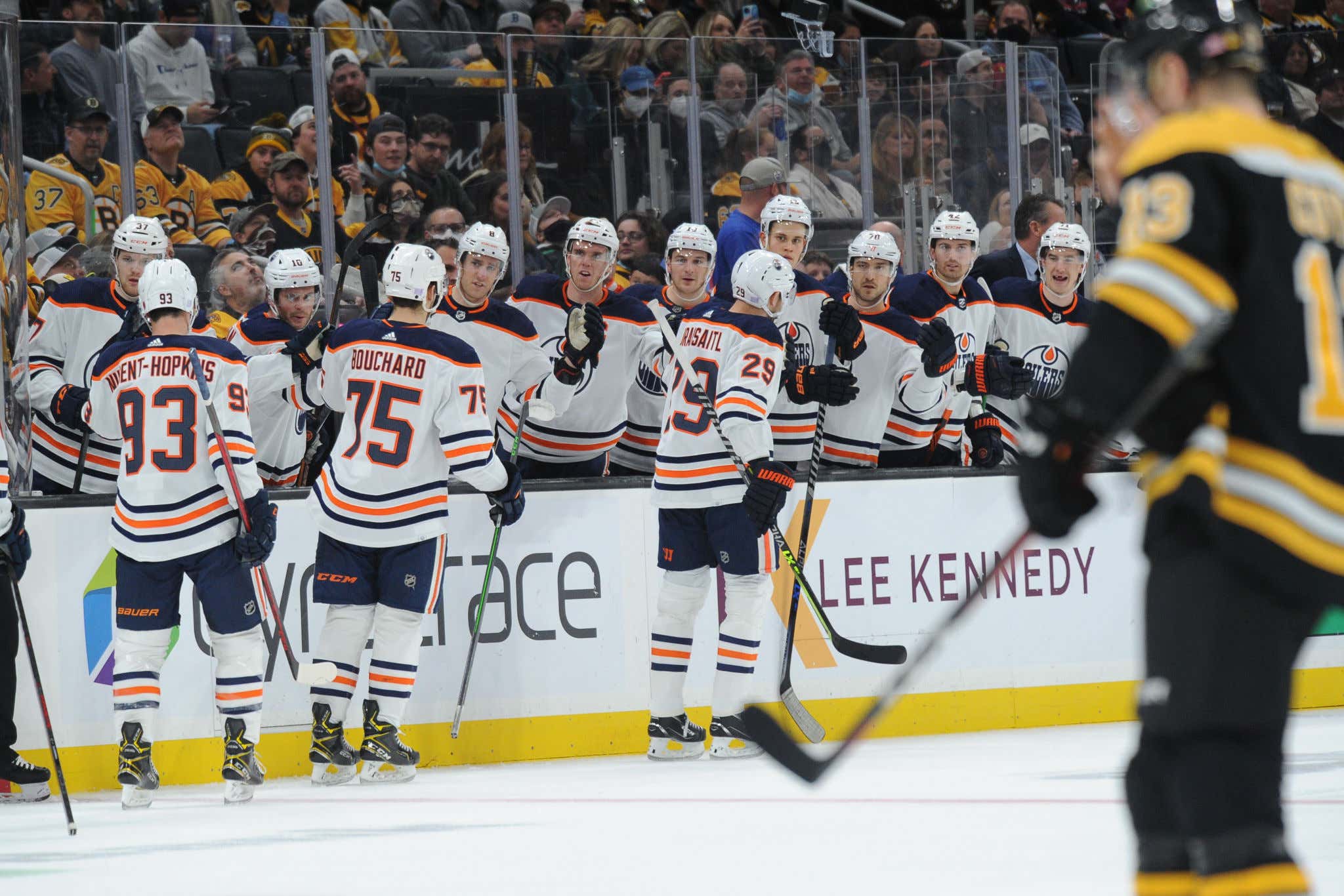 Stop me if you heard this before, but a piss poor defensive performance once again led to a Bruins' loss… the first loss on home ice this year. Let's get into it.

Evan Bouchard responded shortly after, 44 seconds later to be exact, to tie it 1-1. Quite a snipe.

High tempo first period as expected between these two teams. Couple of great chances for both. B's struggled with their breakouts a bit, Edmonton did a really good job sealing the walls off in the neutral zone. B's needed to get PUCKS IN DEEP.

Brad Marchand collected a deflection off Evan Bouchard and buried the back hand to regain the lead for the Bruins. 2-1.

24 seconds later Zach Hyman tied the game. Another response goal from the Oilers immediately after the Bruins. 2-2.

With less than 3 to go in the 2nd a bomb from Brandon Carlo gave the Bruins' the lead ONCE AGAIN. 3-2 Bruins.

Brandon Carlo fumbled the puck and Leon Draisaitl made him pay. Touuuuuugh giveaway. 3-3.

Yet another self inflected mistake on defense led to Cody Ceci extending the Oilers lead to 5-3.

- Nick Foligno & Anton Blidh both returned to the lineup tonight. Trent Frederic did not play after getting hurt last Tuesday vs. Ottawa. Craig Smith slid down to play with Jake DeBrusk & Erik Haula.

- The Bruins have scored first in 8 of 11 games this season. David Pastrnak opened the scoring (and loves playing the Oilers), he has 8 goals, 2 assists in 10 games against them including his goal tonight.

- Brad Marchand recorded his 6th of the year. The top line has accounted for 15 of the the Bruins' 29 goals this year…  (51%). Once again, where is the secondary scoring.

- The B's couldn't hold onto a lead tonight to save their lives… immediate responses from Edmonton after both Pastrnak and Marchand's goals.

- Connor McDavid is an absolute treat to watch. He split the B's D no less than 100 times. Derek Forbort (and Brandon Carlo) will have nightmares about him. Speed is incredible. Pretty shocking the B's held him to just one point.

- Tough defense in the 3rd, especially with 3-2 lead… and you'll never believe what happened next…

- Brandon Carlo giveth, Brandon Carlo taketh away. Just a brutal flub for Carlo and Draisaitl made him pay. Draisaitl once again got the inside position on Carlo minutes later to give the Oilers the lead. Brutal.

- Cody Ceci danced around DeBrusk as well to set up Draisaitl's 2nd of the game. Thought it was a tough night for the 3rd line. Not sure if Craig Smith is still dealing with that nagging injury but he hasn't looked right.

- Just another night with piss poor defense. Self inflicted. Leaky. It was a winnable game going into the 3rd up a goal. Horrible effort. It's starting to become a theme with this team. Gotta figure it out.

- Linus Ullmark got the start in net tonight. Thought he had a strong game despite the score. I imagine it'll be Swayman vs. NJD and Ullmark back in net Sunday vs. the Habs.

Bruins & Oilers honor and remember Colby Cave: his widow dropped the ceremonial puck, game used sticks from tonight's game will be auctioned off with proceeds going to Cave's memorial fund. (BruinsAuctions.org to bid).

B's are back at it Saturday afternoon against the Devils.