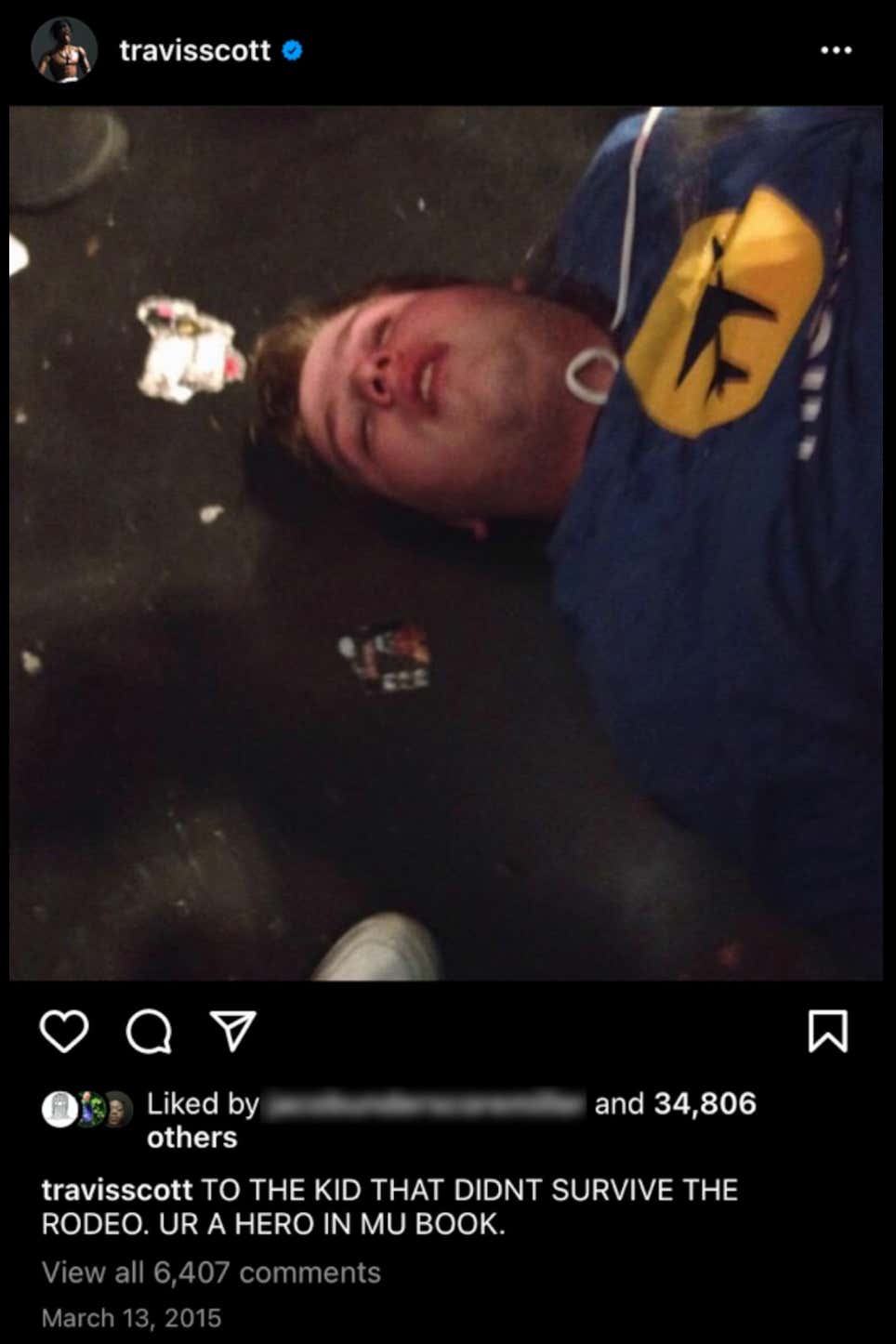 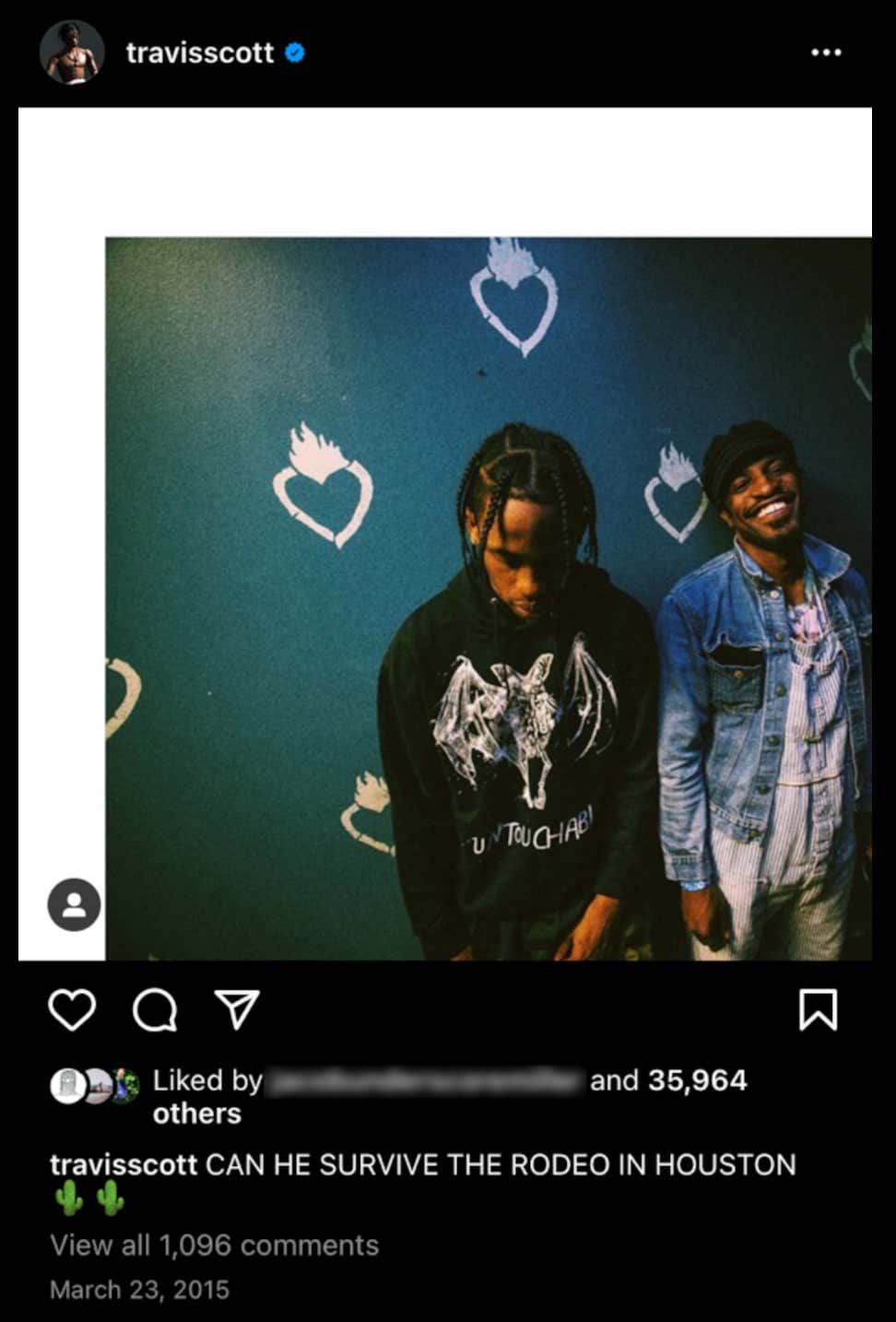 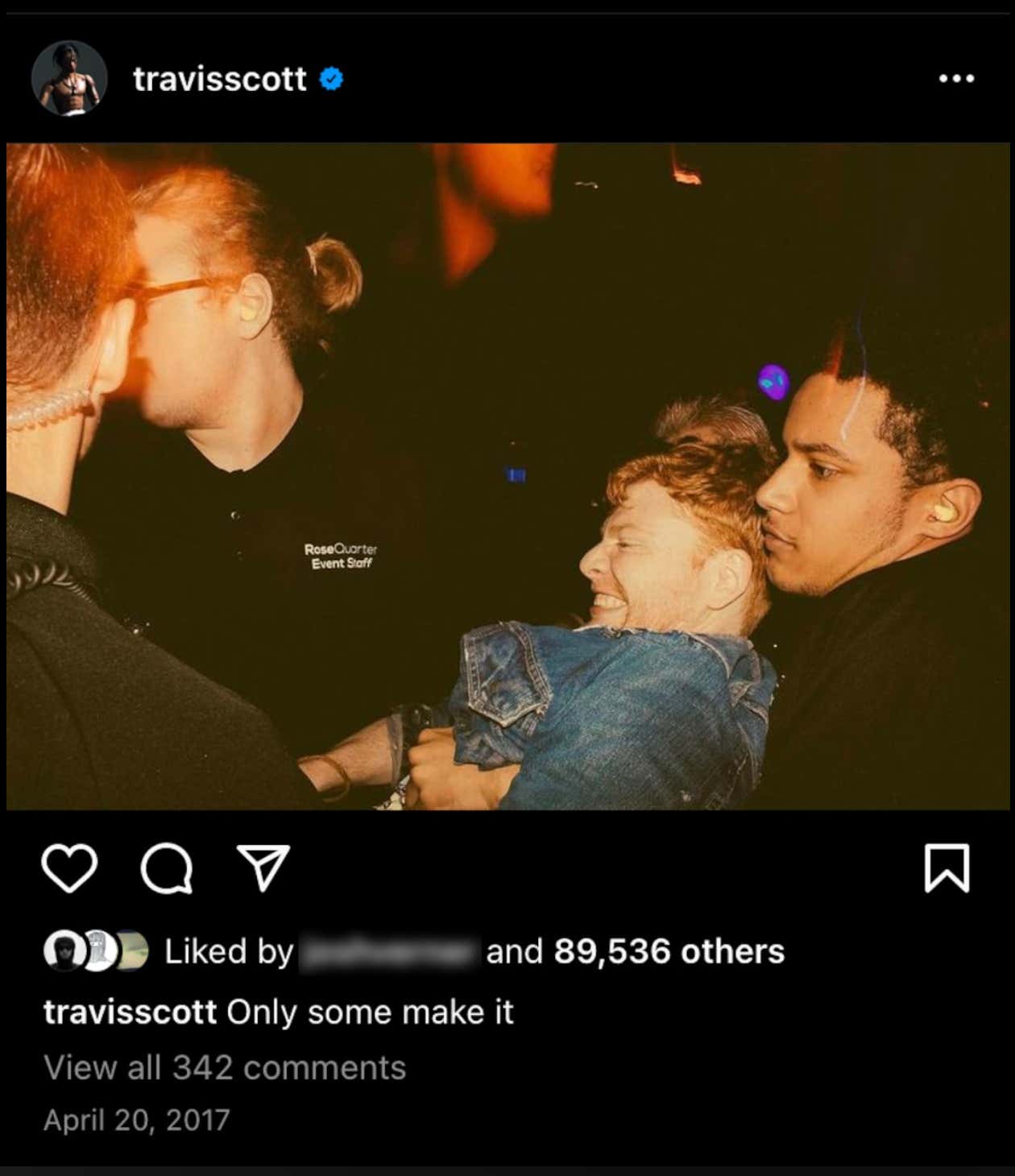 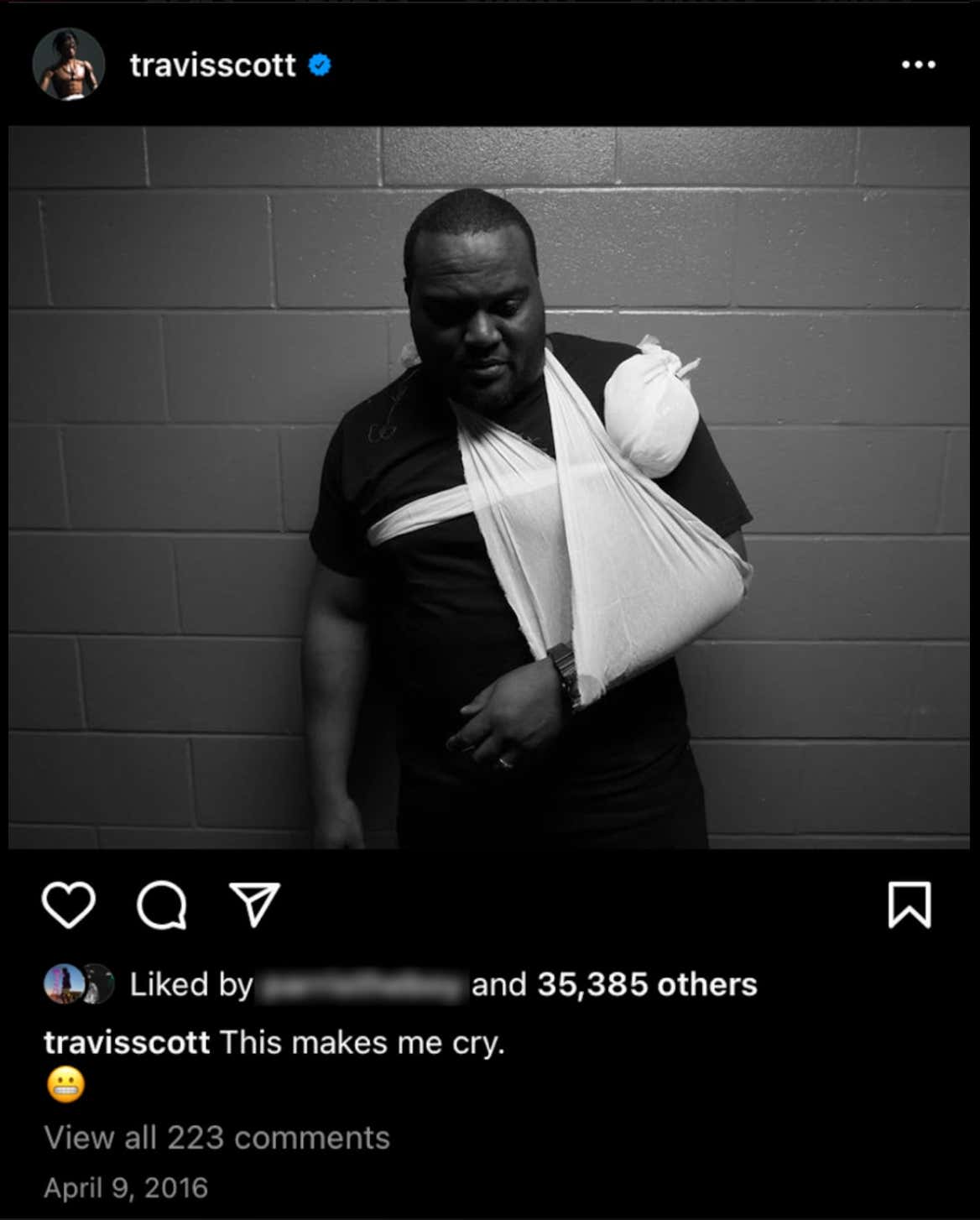 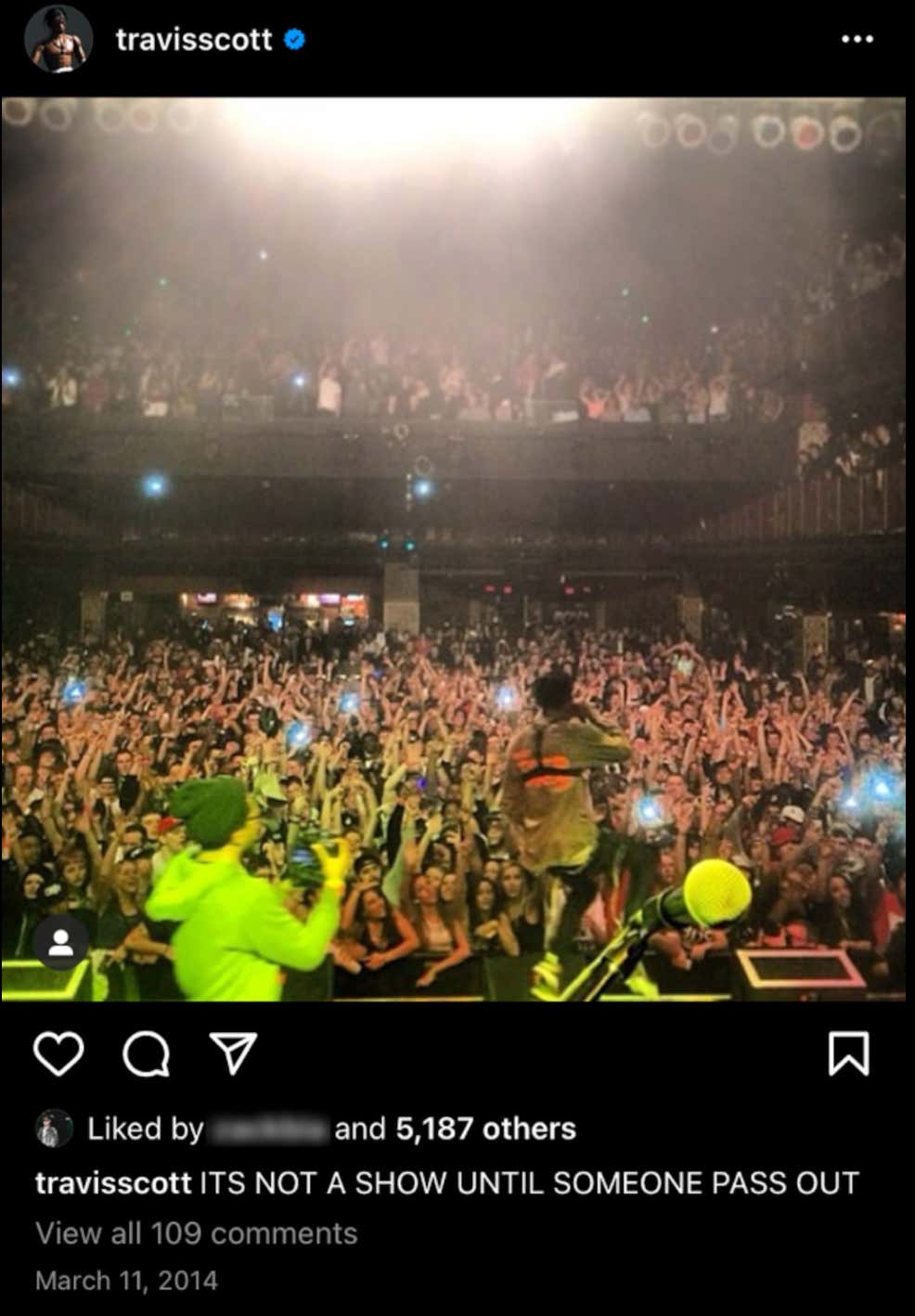 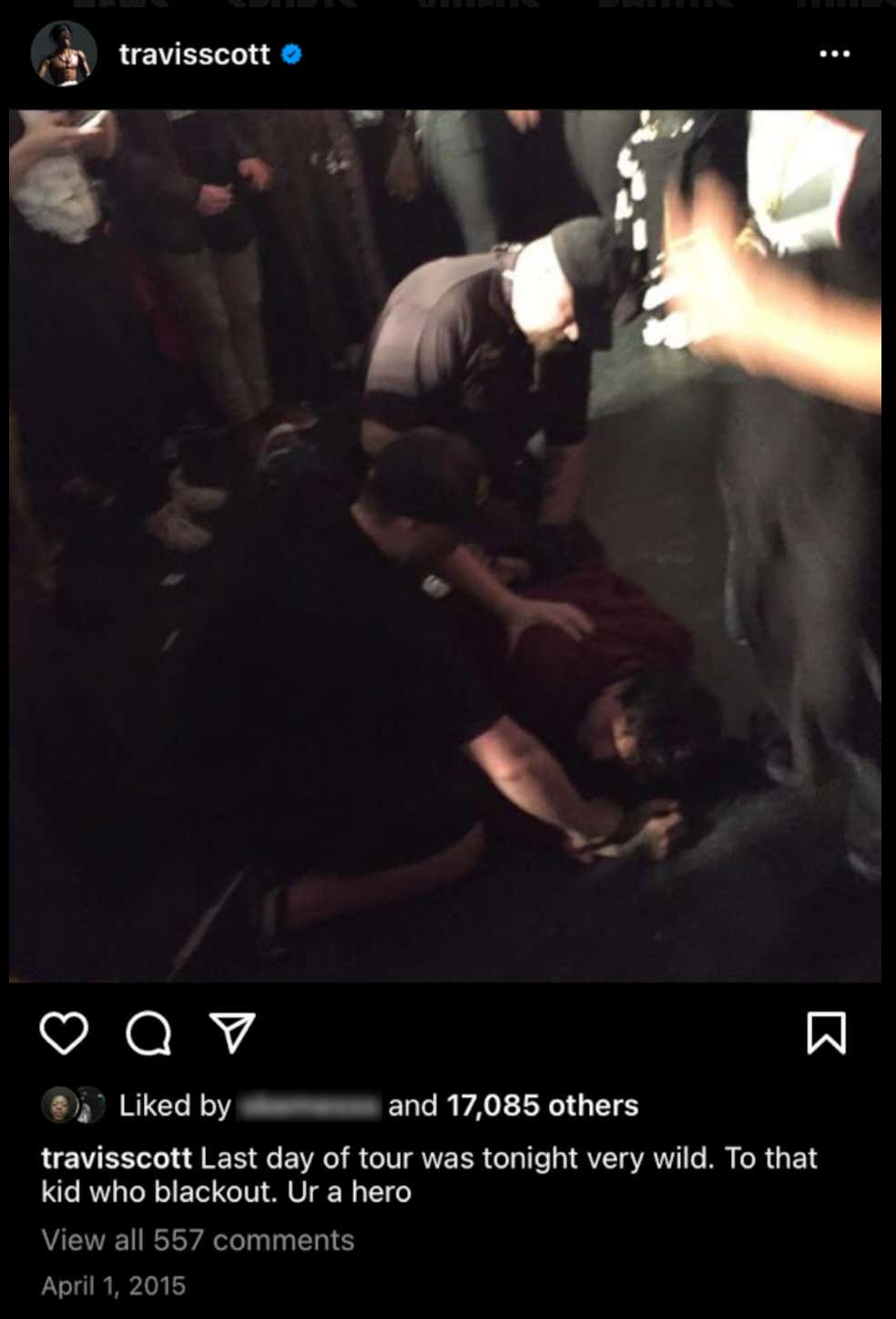 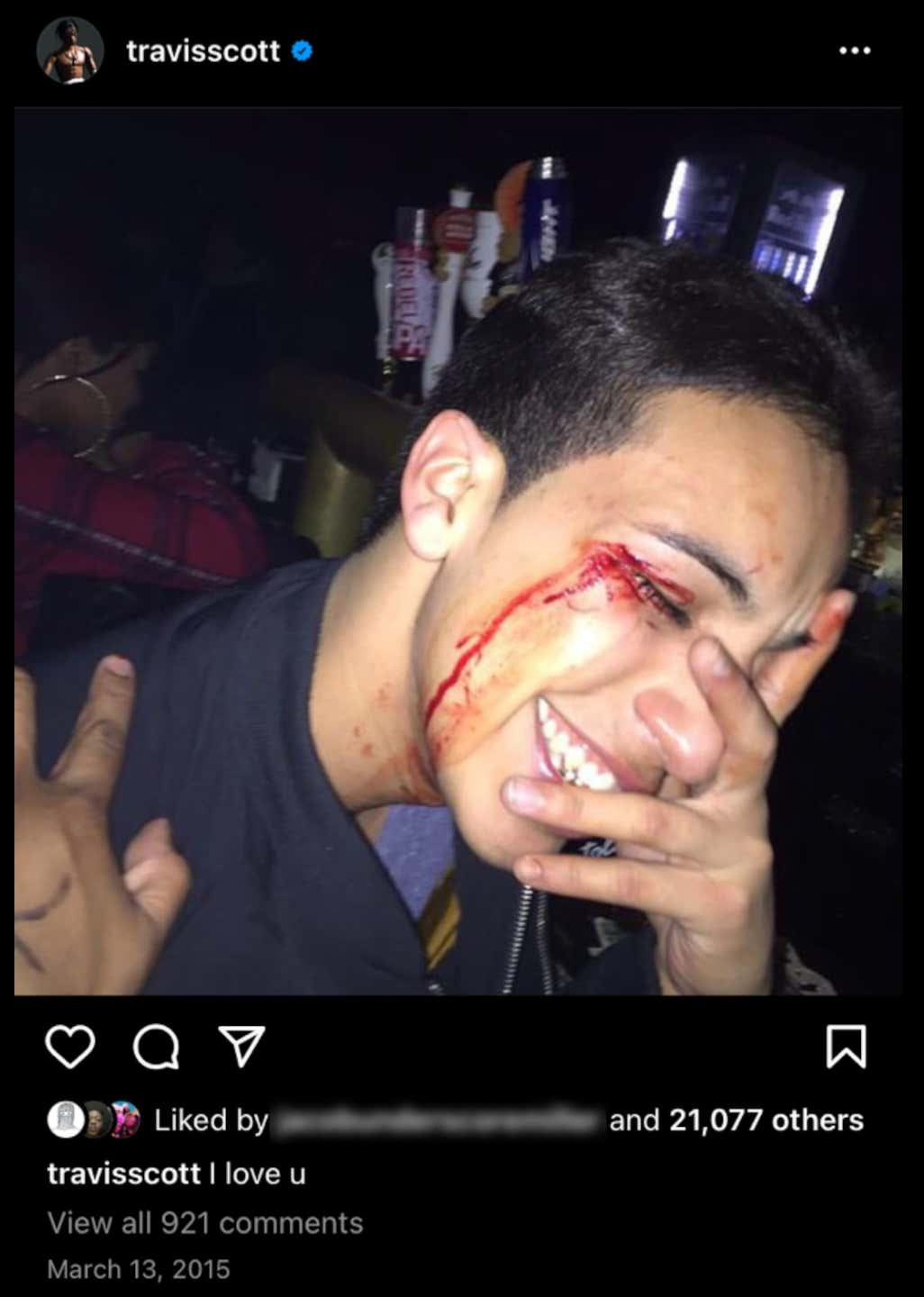 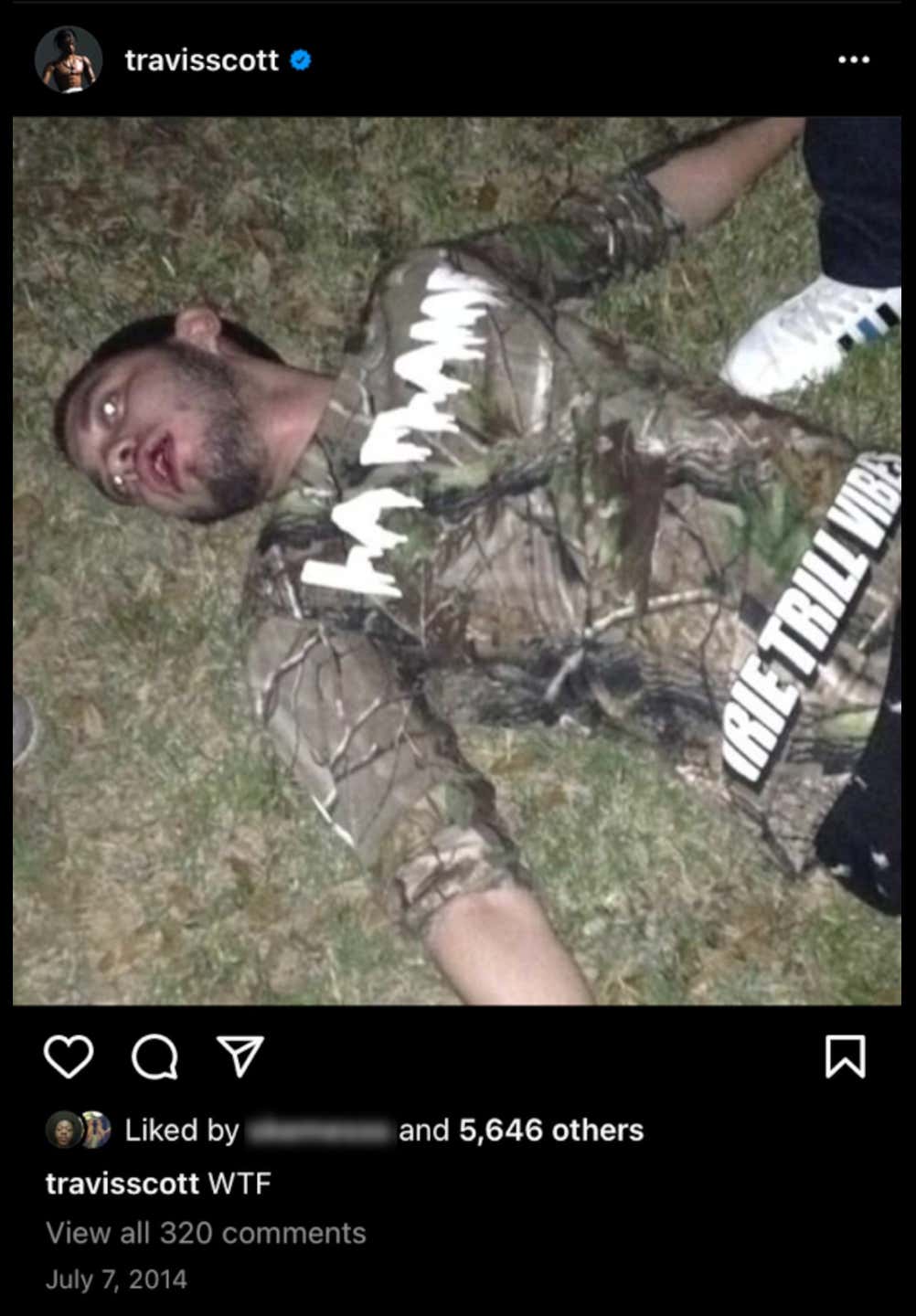 Now these are obviously NOT from this past weekend's Astroworld tragedy, they are from the past few years. But how in the fuck are these still up on Travis Scott's Instagram account? How is his Instagram account still up whatsoever?

Is anybody taking what happened this weekend seriously?

As KFC said in his One Minute Man tirade, it's kind of hard to take an apology seriously when the words "I'm sorry" are never uttered.

TMZ - Travis Scott might act like he didn't know how bad things really were at this year's Astroworld Fest -- but his own posts and words demonstrate … the dude knew how his fans got down, and often encouraged them to risk their safety.

There are a number of still photos Trav has posted on his Instagram account from over the years that show fans of his injured to varying degrees … from what appears to be simply attending concerts of his.

Many of the times he spotlighted a certain individual who was injured … and seemed to glorify and glamorize it, with captions like … "SHE BROKE HER HAND AND SHE DOESN'T GIVE A F***!!!" or "IT'S NOT A SHOW UNTIL SOMEONE PASS OUT."

Put aside the fact he's been arrested/cited at least twice for inciting a riot. The real criticism doesn't necessarily lie in him getting his fans hyped … but more so, him taking things too far, and seemingly, more often than not, refusing to lower the temperature in the room. That has led to lots of his fans getting hurt in his presence. And, even when he does acknowledge an injured person on the spot, it often comes off cold and callous.

You've gotta shut this shit down and start showing contrition and remorse for just how bad this entire tragedy really was.

They should have that night, if not first thing Saturday morning. But of course, lawyers care only about one thing and one thing only, and that's their client incriminating themselves. But fuck it, they have Travis dead to rights on this. As if the HUNDREDS of eyewitness videos aren't enough, now the Houston Police Chief has come out spilling the beans.

HPD just put out a statement claiming that once CPR started on a concertgoer is when cops told "personnel in charge of the event to shut down the performance." They do not specify what time that happened, or if event organizers obliged.

2:04 PM PT -- Houston PD's Chief of Police just gave an update on where things stand with the Astroworld Festival investigation -- and he made 2 things very clear … his agency apparently DID communicate something was seriously amiss to production during the show, and that he believes Travis Scott and his team were ultimately responsible for pulling the plug.

Details from the security and emergency response plan have began leaking out and it also couldn't look worse.

The security and emergency response plan prepared by organizers ahead of the Astroworld festival in Houston lays out details for responding to tornadoes, extreme heat, bomb threats, earthquakes and active shooters.

But the 56-page document never once mentions how to handle a dangerous crowd surge, like what took place during headliner Travis Scott's concert over the weekend — and like the last time the rapper performed at the festival in 2019.

The plan also instructs security personnel to be aware of the possibility of a mob when attempting to detain an unruly or out of control concert-goer. "If detaining the perpetrator, watch for angry groups, mobs forming." But, again, provides no best practices on what to do once that happens.

In the instance of a fatality, staff were told to "never use the term 'dead' or 'deceased' over the radio." Instead, they were told to notify Event Control using the code "smurf."

One notable section in the document asks staff to use a code word in the event of a traumatic injury resulting in death at the venue. Specifically, security responding to a potential fatality must begin by "notifying Event Control of a suspected deceased victim utilizing the code 'Smurf,'" borrowing from the blue animated children's characters. The document stresses staff should "never use the term 'dead' or 'deceased' over the radio."

And the victim count is sure to rise as, (and this is fucking awful to have to write), 22-year-old Bharti Shahani has been hospitalized since Friday's concert, clinging to life on a ventilator, and has been declared brain dead.

And even worse, a 9-year kid Ezra Blount is currently in a medically-induced coma after becoming a victim of the stampede.

Prayers for Ezra and all those injured fighting to stay alive.