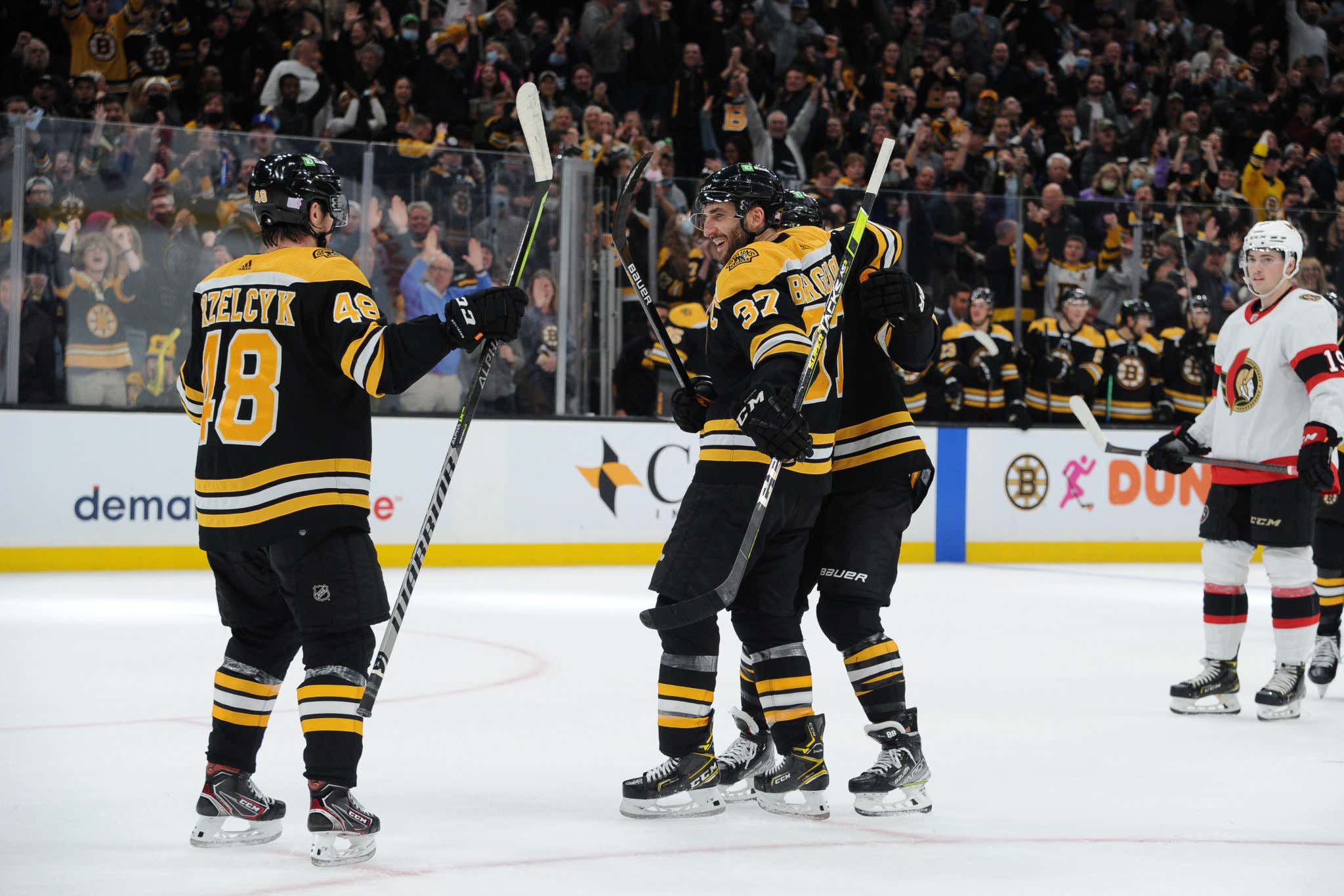 It sure as shit wasn't pretty, but the Boston Bruins picked up a 3-2 win over the Ottawa Senators on Tuesday night to get back in the win column and stay perfect on home ice. LET'S GET INTO IT!

1:14 into the game Ottawa cashed in with a juicy rebound after a bad turnover. Zach Sanford. 1-0 Senators.

With Artem Zub in the box for cross checking, Brad Marchand tied the game on the ensuing power play. Shot from David Pastrnak went off Marchand and in. They don't ask how they just ask how many. 1-1.

Derek Forbort, noted goal scoring machine, made it 2-1 Bruins with 9:02 left in the 2nd. Took the space and went far side on Matt Murray. 2-1 Bruins.

With 6:51 left in the period Ottawa tied it up, shot from Nikita Zaitsev near the right half boards found a way through Swayman. 2-2.

After Charlie McAvoy shattered his stick, David Pastrnak fed Patrice Bergeron, who got a fortunate bounce off said stick, firing home his 5th of the year. 3-2 Bruins.

- Jack Studnicka slid back into the lineup tonight, this time playing RW on the 3rd line. Nick Foligno has been skating and practicing with the team, and we'll likely see him on Thursday night vs. EDM.

- On the flip side of things the Senators were dealing with a COVID outbreak, they were without Connor Brown, Dylan Gambrell, Austin Watson, Nick Holden and Victor Mete tonight. Anton Forsberg was out with a non-COVID related illness.

- Just a miserable no good 1st period for the B's. Ottawa opened the scoring 74 seconds into the game and then the B's took a whopping 3 penalties and just looked horrible. Sloppy. Bled into the start of the second as well with Pasta taking another penalty 6 seconds into the period.

- B's finally started winning their battles and executing, starting with Brad Marchand's PP goal in the 2nd. He extended his point streak to 4 games (1G, 8A) with his 5th of the year. Best player on the ice tonight. 3 goal second period for the Bruins helped turn the tide.

- Derek Forbot has already matched his career high goal total (2) in 10 games this season. While he has had some tough nights on defense, he's generating offense. Can't complain about that.

- Put Patrice Bergeron on the (unconventional) hands team. What hand eye coordination for his 5th of the year.

- Trent Frederic suffered an upper body injury late in the 2nd (got lit up by Josh Brown), B's announced early in the 3rd he would not return. We'll see if they recall anyone from Providence (I doubt it if Foligno is good to go).

- Physical game to say the least. Charlie McAvoy (2A) was lighting guys up.. Connor Clifton and Alex Formenton dropped the gloves late in the 2nd. Good bit of nasty tonight.

- Jeremy Swayman got the start in net. Tough rebound on the game opening goal and Zaitsev's goal snuck by, but other than that he held his own. Finished the night with 25 saves on 27 shots, including one massive save to preserve the lead late in the game.

- Shout out to Bruce Cassidy who earned his 200th victory behind the bench.

The Bruins stay perfect at home this year 5-0-0. Got the job done against a depleted lineup, but the real test will be how they stack up against the Edmonton Oilers when they come to town on Thursday night. Tonight was an ugly win, but Thursday will be the measuring stick.