I feel like LA sports fans take a lot of heat for not being great fans due to a lot of shit that probably has to do with the weather being heaven and the traffic being hell. However, there is no denying they are elite sports fighters and the NFL's return to LA is only hammering that home.

However, last night we met their king. He is number 1 in your programs and simply goes by Rivera. What a performance. Dude was confronted by two of the baddest players in the NFL in Derrick Henry and Aaron Donald, knocked them the fuck out, then calmly went about his business. Okay, it was just two fans wearing those jerseys but I still give Rivera extra points on my judge’s card for KO'ing guys in Henry and Donald jerseys instead of Tannehill and Woods jerseys.

Not only that, but Rivera took on Andy and all challengers instead of just challengers wearing the other teams laundry and even has a stooge like every great street fighter does, That stooge is so bad ass, he not only cleans up Rivera’s trail of carnage but he stepped on and over one of Rivera's victim like he was a rug instead of a breathing human. 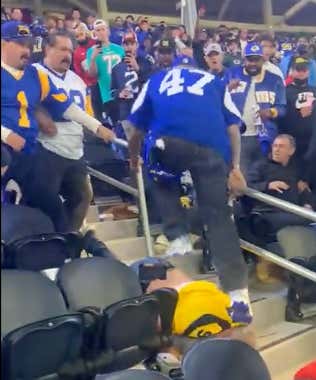 The Rams will be playing in front of packed stadiums in prime time as long as Sean McVay can work his magic. Which is why I need people to continue to bring their cell phones and record the carnage that goes on as nobody does a goddamn thing to help their fellow man because the people of LA are apparently not nearly as warm as the weather.

Now if you will excuse me, I have to see if I can get a Rivera jersey in my size because we may have just met the next great Rough N Rowdy fighter.