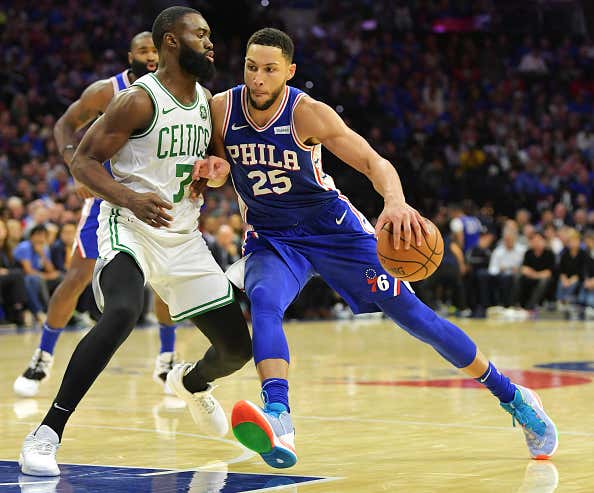 Another day, another update on the Ben Simmons saga. I think we're all just sort of waiting for this ordeal to end, I mean Sixers fans don't miss him, the team certainly doesn't considering they are riding a 6 game winning streak and are sitting nice at 8-2. This story was good to get us through the slow days of the offseason, but now that there's real basketball going on, who cares. I hope Simmons is able to get whatever help he needs from a mental health standpoint and all that, but I don't need to be hearing about him every day while the only true update is "nothing has changed". Just wake me up when he's traded.

So why am I blogging this? Because I couldn't help but notice one little nugget that Shams threw in at the bottom of this article. A blurb so outrageous I could not let it go

The Boston Celtics have engaged in conversations with the 76ers revolving around Simmons and expressed interest in the 6-foot-11 guard, sources tell The Athletic. Talks have been fluid with no traction as of yet, those sources say. Any potential Simmons deal with the Celtics would have to include All-Star forward Jaylen Brown, an ascending talent who is in the midst of another career season, averaging 25.6 points, 6.1 rebounds and 2.5 assists.

Ah yes, Brad Stevens would totally trade Jaylen Brown for Ben Simmons. That makes total and complete sense! Not just from a talent perspective, but a quick look at their roster tells you the one thing the Celtics need is MORE nonshooters! It's pretty painfully obvious what this is. Everyone knows Simmons is for sale. As the new boss, Brad calls Morey and says OK sure, what's your price. Morey says Jaylen at a minimum and Brad immediately hangs up. Now Morey can tell Shams that he's been in talks about a player who is a legit All Star talent. What better way to help drive up Simmons' market? Stop offering me trash, I'm talking with the Celtics about a potential deal surrounding Jaylen Brown! We can all see through what is happening here.

There is no doubt that a lot of other teams have "expressed interest" in Simmons, which is calling Morey and asking his price. But you see, you mention the Celtics and Jaylen Brown and it'll get buzz. It'll make its round on the internet. Case and point

There's literally no reason for that blurb other than to try and publicly raise Simmons' value, the only issue there is everyone with a brain knows the Celtics would not trade Jaylen Brown for Ben Simmons. It doesn't matter what else in terms of picks the Sixers throw in either.

So no, Jaylen Brown will not be traded for Ben Simmons. I feel confident in saying that. That doesn't mean he's untouchable, pretty much every player in the league has a price. But Jaylen's price sure as shit is not Ben Simmons. The organization wouldn't trade this dude for Kawhi or James Harden but yeah they'd totally move him for Ben Simmons. Especially the version of Jaylen that is having himself an All NBA caliber start to his season.

I can't fault Morey for trying, it's his job. We know Shams will act as a mouthpiece for Klutch when they need him to. But you're going to have to try a little harder next time than a Jaylen for Simmons swap. That wouldn't even be allowed in 2K. Why would the Celtics, a team in the same division as the Sixers, give them one of their franchise cornerstone players for someone not even playing who is extremely flawed? That is a good idea that benefits them….how?

But hey, it'll go viral. People will talk about it. They'll make their "Almost Brad" jokes and say he couldn't pull the trigger just like Ainge. Sometimes the more things change, the more they ultimately stay the same.