I came, I saw, the Dolphins won.

It was as bad as advertised as the Miami Dolphins and Houston Texans became the second matchup of 1-7 teams. In 2004 the Carolina Panthers faced the San Francisco 49ers, with both teams holding 1-7 records. The matchup saw one quarterback return from injury and another miss a game, while the Deshaun Watson shadow hangs over both teams. Tyrod Taylor was back under center for the first time since Week 1; the Texans lost all seven games that Davis Mills had started. Tua Tagovalioa was a no-go, as a tiny fracture in his left hand forced the Dolphins to start Jacoby Brissett.

The game was ugly. Nine turnovers combined, as both teams looked like they wanted to lose, but there had to be a winner, and that was the Dolphins who beat the Texans 17-9. Miami got an early score, taking a 7-0 lead in a pattern that has become all too familiar for Dolphins fans. It was an 80-yard drive that was capped by a six-yard touchdown run by Myles Gaskins. It was Gaskins' longest run of the game, as he had another scintillating performance, with 34 yards on 20 carries, adding a fumble into the mix.

The Dolphins' touchdown drive started when Jevon Holliday picked off Taylor in the end zone. As the first quarter turned into the second quarter, the game turned ugly as the teams began to cough the ball to each other. Brissett was picked off for the first time by Eric Murray. One play later, it appeared that Tyrod Taylor fumbled on a sack, but the call was overturned by replay, keeping the ball in the hands of the Texans' offense.  The Texans would punt the ball, as their offense was stuck in neutral.

The Texans got their big break early in the second quarter when Myles Gaskins fumbled at the 33. Miami, however, limited the damage by holding Houston to a field goal. The Dolphins gave the Texans another three free points when Jevon Holland fumbled a punt, giving the Texans the ball at the Miami 23. The Dolphins would get down the field late in the second quarter and got a field goal. The critical play was an 18-yard reception by Mike Gesicki to get the ball back in field goal range after Brissett was dropped for a 12-yard loss. The Dolphins then got a break of their own as Taylor threw up a careless interception that was caught by Jerome Baker with 59 seconds before halftime. The Dolphins made the Texans play as they went 26 yards in four plays, with Mack Hollins catching a five-yard pass from Brissett to give Miami a 17-6 lead at the half. 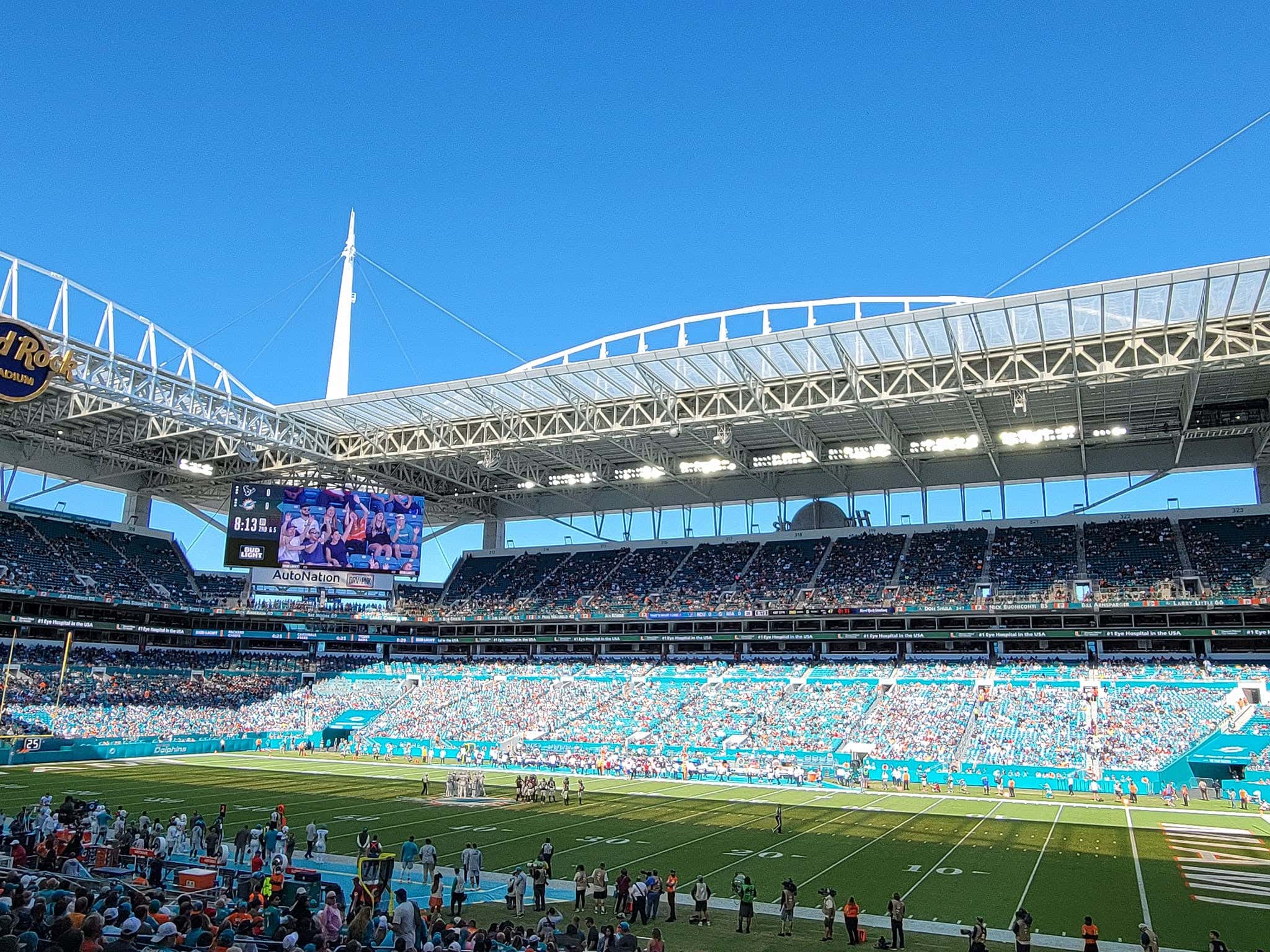 The teams combined for five turnovers in the first half. They were not done turning the ball over, but they were nearly finished scoring as the Dolphins were blanked in the second half, while the Texans managed just a third field goal from Ka'imi Fairbairn. Both teams had interceptions on the first series in the third quarter, setting the tone as teams combined for nine turnovers, showing just how ugly a matchup of 1-7 teams could be. The ugliness trickled into the stands as Hard Rock Stadium was half empty, with sections in the upper deck, looking like 2020, when only limited fans were allowed to attend the games.

The Texans had their best drive as the fourth quarter began. The drive saw the Texans pushed back to their own two-yard line after Jaylen Phillips and Emmanuel Ogbah sacked Tyrod Taylor. Making several third-down conversions, the Texans got down to the goal-line but settled for a field goal. Leading 17-9, the Dolphins had a chance to put the game on ice, but Brissett fumbled at the Houston 35. While the Texans failed to take advantage, the Dolphins could not run out the clock as Brissett overthrew Hollins on a play in which a first down would have allowed the Dolphins to nearly run out the clock. The Texans, however, fumbled as Brian Flores made a successful challenge when Eric Rowe stripped Jordan Akins. The Dolphins were able to take the clock down to 27 seconds, as the Texans were unable to get a miracle play after starting their final drive on their own two.

The Dolphins had their second win of the season, it was hardly a Picasso, and the highlights could be shown exclusively on the next Football Follies video. Nine turnovers, five from Miami and four from Houston, show why these two teams were 1-7 entering the game, and likely neither team will win many games the rest of the season. The Dolphins don't have time to rest, as they will host the Baltimore Ravens on Thursday. The Ravens had a dramatic comeback win over the Vikings on Sunday, so I am expecting the Dolphins streak to end at one win.

I was glad to finally get a chance to see a game in Miami. I had seen the Dolphins play in the Meadowlands but had never come down to watch a home game in South Florida. Hard Rock Stadium is much nicer than Met Life Stadium, a stadium devoid of personality. The area around the stadium is a mess, as they are setting up stands and preparing to create an F1 racing track for 2022. Inside, there were empty seats everywhere as the Dolphins' attendance of 60,000 was a blatant fib unless half those 60,000 were disguised as empty seats. 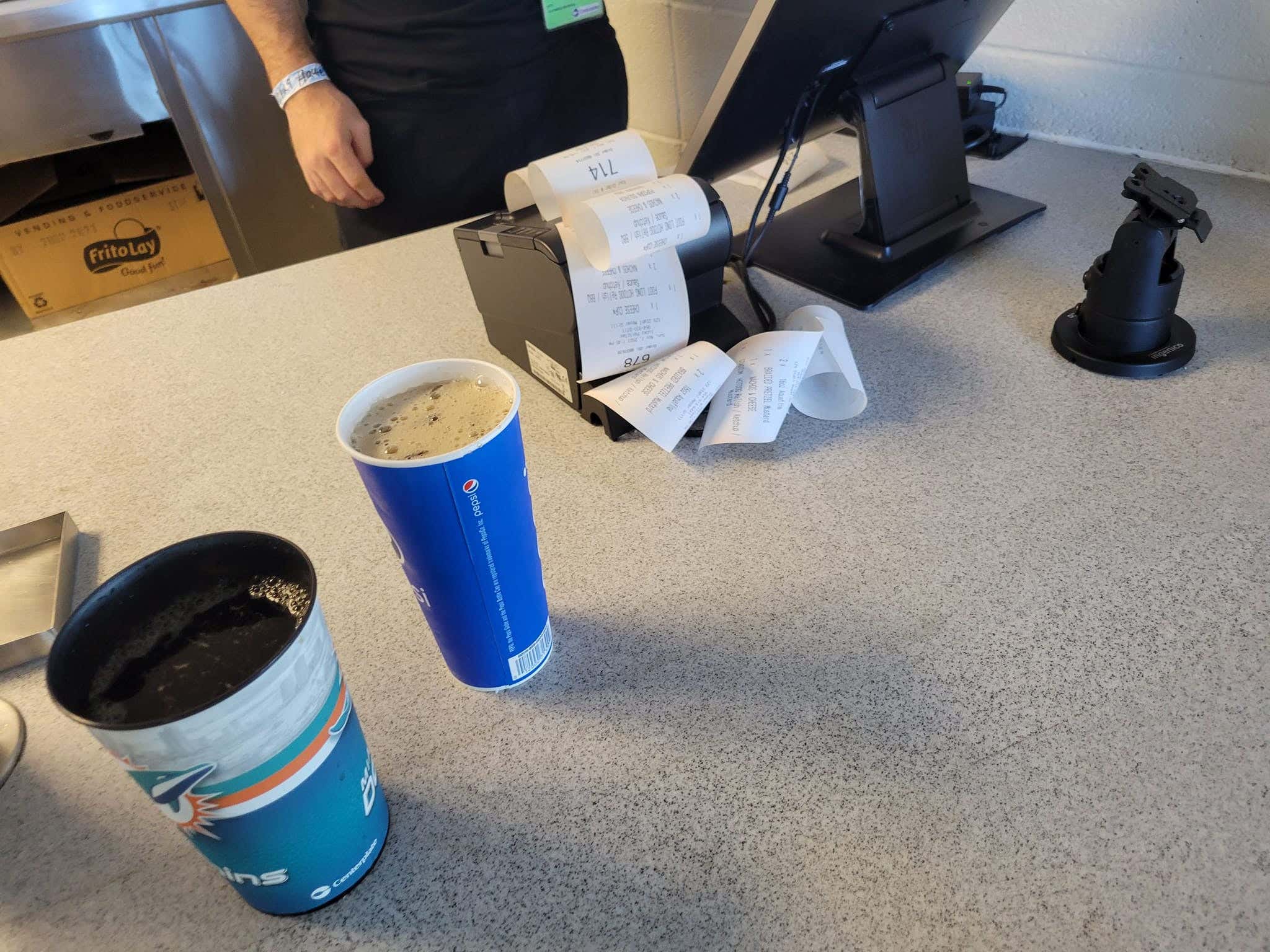 I will be releasing a food review of Hard Rock Stadium at a later date. However, I have one complaint. The mobile ordering system was an embarrassment, and it was an even more considerable embarrassment than the nine turnovers that the Texans and Dolphins had. As the game was set to begin, I walked around and got some souvenirs. The security was friendly, the people at the team store were helpful, but the concessions selling food was a mess. With long concession lines, I thought doing a mobile order would save time. I ordered hot dogs for a review and soda; I made the order 15 minutes before kickoff. I kept checking my phone for the text that the food was ready. It never came.  At the end of the first quarter, I went to the mobile order stand, only to be told I was at the wrong mobile order stand. Finally, I would reach the concession stand that received my order in section 129. The mobile orders were being ignored and piling up on register tape. I got my food, and it was cold, and I had to wait in line behind a large group ordering food together. Unacceptable. If you have mobile ordering, you need to get it ready when it is ordered. Do not let it pile up. Mobile ordering is meant to cut the line, if you cannot handle the mobile ordering, do not offer mobile ordering, but the mobile order situation was unacceptable.