We're officially over the halfway mark for the 2021 season. Wild how fast things go.

First off, REALLY like the over in this one.

The Pats have scored 25+ points in their last 4 games and are averaging 33.75 PPG during that span. They're also 4-0 to the Over in said games as well. Mac Jones and the offense are really starting to put it together. His leash is getting longer (thank you McDaniels) and with he's been aggressive. Couple that with New England giving up 23.5 PPG in those four defensively and you have a perfect mix of a team that can score and also has to keep its foot on the gas pedal.

This line opened with New England as a short 2.5-point road favorite. Respected money has pounced on the Patriots, steaming New England up from -2.5 to -4. Non-conference road favorites are 11-6 ATS (64.7 percent) this season. One big injury to monitor here is Panthers QB Sam Darnold. He left last week’s game with a concussion and is questionable for this game. If he can’t go, backup P.J. Walker will get the start. We could also be looking at a lower-scoring game. Respected Under money has dropped the total from 43 to 41. When the total is 45 or less, the Under is 23-13 (63.9 percent) this season.

The Patriots (4-4) are riding their two-game win streak on the strength of an offense that’s found a rhythm, and a schedule that’s hit a weak stretch. Harris has rushed for 100 yards in two of the last three games and has scored a touchdown in four consecutive weeks. Hunter Henry, one of two tight ends the Patriots signed in free agency this off-season, has scored a touchdown in four of the last five games.

The Panthers (4-4), get Darnold back today along with Christian McCaffrey. McCaffrey is expected to be on a pitch count that likely would limit him to fewer than 30 to 40 snaps. Rhule wants to keep rookie Chuba Hubbard , Royce Freeman and Ameer Abdullah , who helped the Panthers rush a season-high 47 times for 203 yards last week at Atlanta, in the mix.

The Patriots are extremely thin in the secondary

So expect Sam Darnold to have a better game than expected. I think Carolina keeps this one close or gets back on track with a big win at home. 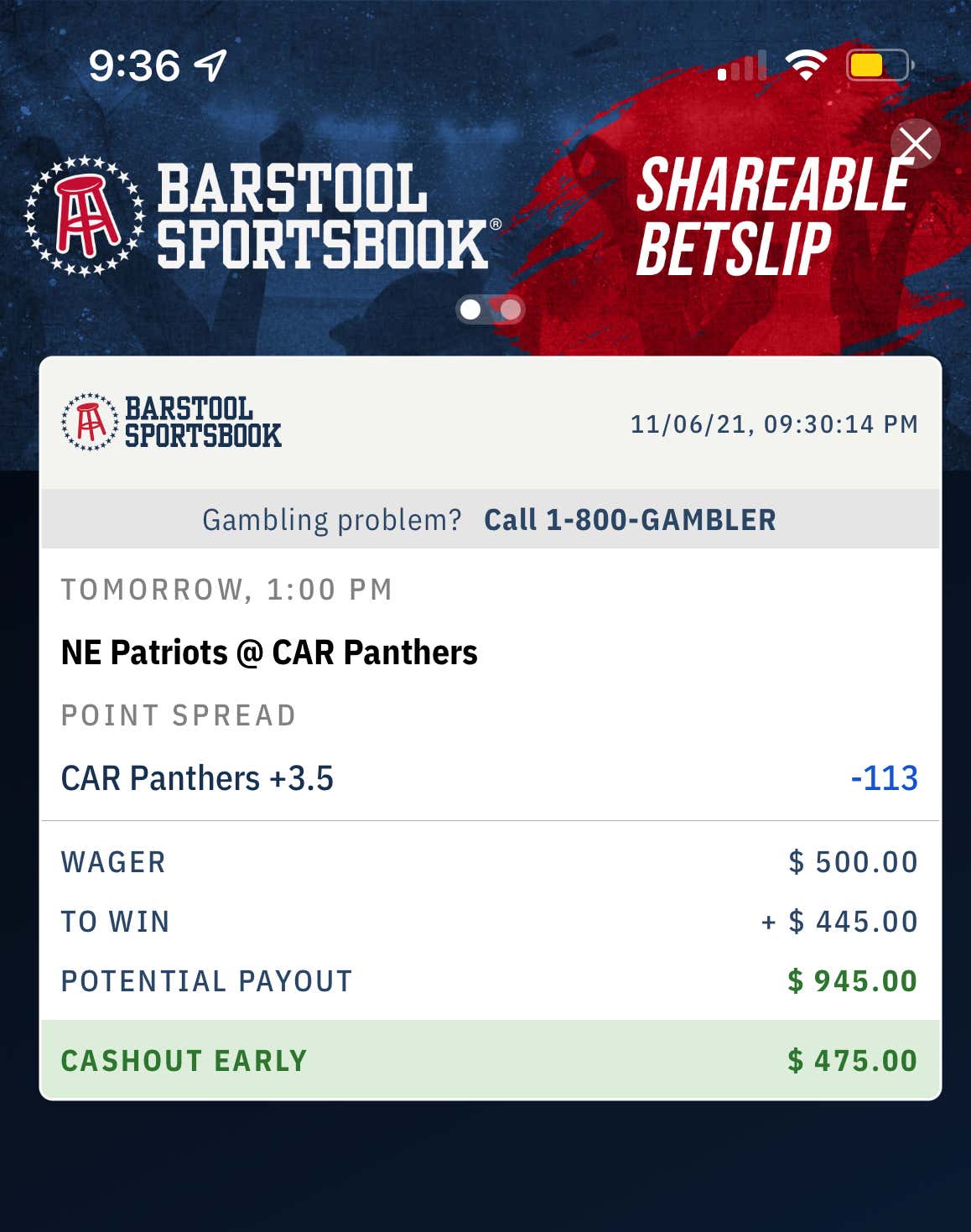 What did the Giants do to alienate the league schedule-makers? They have been dealt an early kickoff following a deflating Monday nighter on the road while the Raiders relaxed during a bye week. The Giants have been haunted all year by injuries, illustrated by the fate of WR Sterling Shepard. He returned from rehab Monday, then exited the game with a quad injury. No Barkley either in this one for NY.

The Raiders are 67% ATS on the road this season compared to New York's 25% ATS marker at home. Las Vegas has scored 30+ in two straight, New York hasn't hit 30 once all season. The Vegas pass rush will give young QB Daniel Jones fits.

The raiders also got TE Darren Waller and RB Josh Jacobs back this week.

I see the Raiders winning their third straight game for the second time this season to improve to 6-2 and remain in the lead in the AFC West. 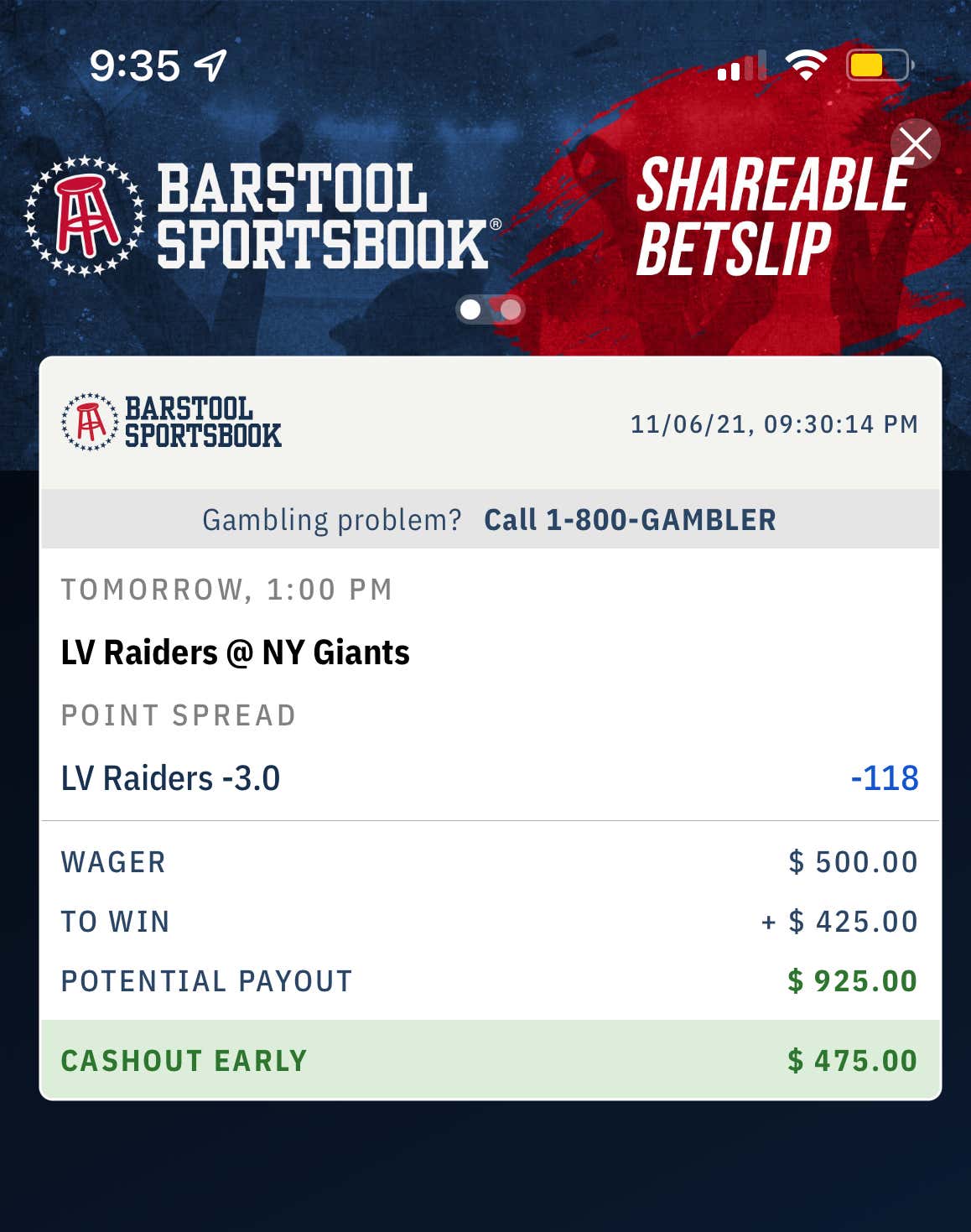 Do I like the fact that even as a 14.5-point favorite, 84% of bettors are taking the Bills to cover against the Jaguars today, per and 99% are on Bills moneyline? No. Not at all.

But I xpect a huge bounce back Sunday for Josh Allen in the warm Jacksonville weather where the deep balls will be flying. Couple that with its defense and a green light to swarm Trevor Lawrence. When pressured this season, Lawrence has a completion percentage in the 40's and twice as many interceptions as touchdowns. Buffalo's defense should provide excellent field position for Josh Allen to strike early and often. Also, Jacksonville does a decent job defensively of pressuring the QB, however they have the 2nd-worst sack rate in the NFL. A nightmare against a QB who can run. 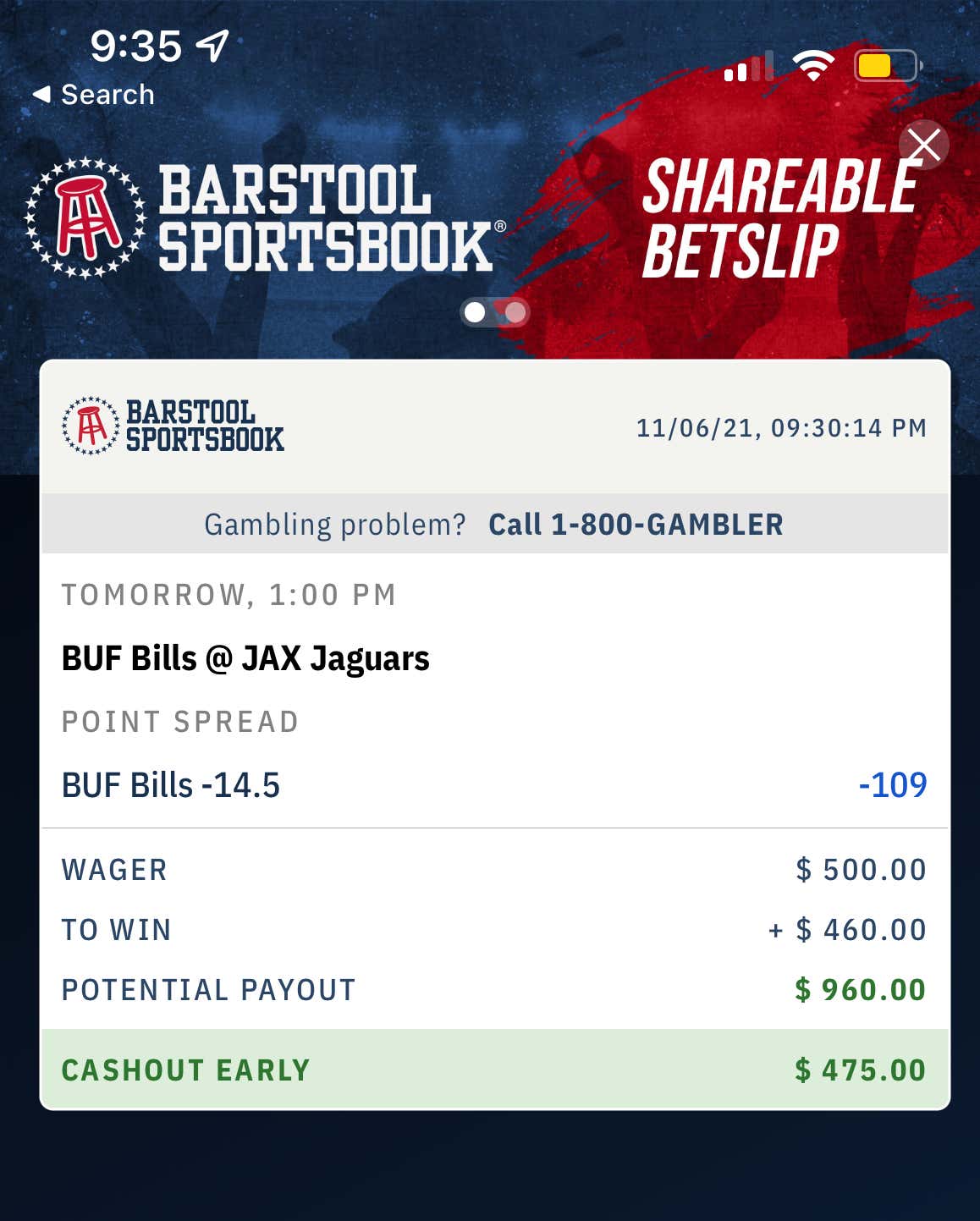 This line moved 7.5 points with the news Aaron Rodgers would be unavailable to play due to COVID-19 protocols. I think he's worth more to the line than that.

While this is a much more important game for the Chiefs as they struggle to stay in the playoff race, the offense has just looked disjointed for too much of the season to expect them to throw up a big number on demand. And what if Jordan Love is solid? (Which I think he will be) I think there's a better chance of the Packers winning this one straight up than people think. And there's no way Kansas City fixes all their issues in one week.

Green Bay is 4-1 ATS on the road while Kansas City is 0-3 ATS at home. The Chiefs were lucky that the New York Giants were incompetent offensively Monday night or they would have lost outright. Kansas City refuses to take its medicine on offense, electing to refuse the run game even when it's working, not to mention it's a short week for them as well.

I like the Pack and the points. Also took them straight up. 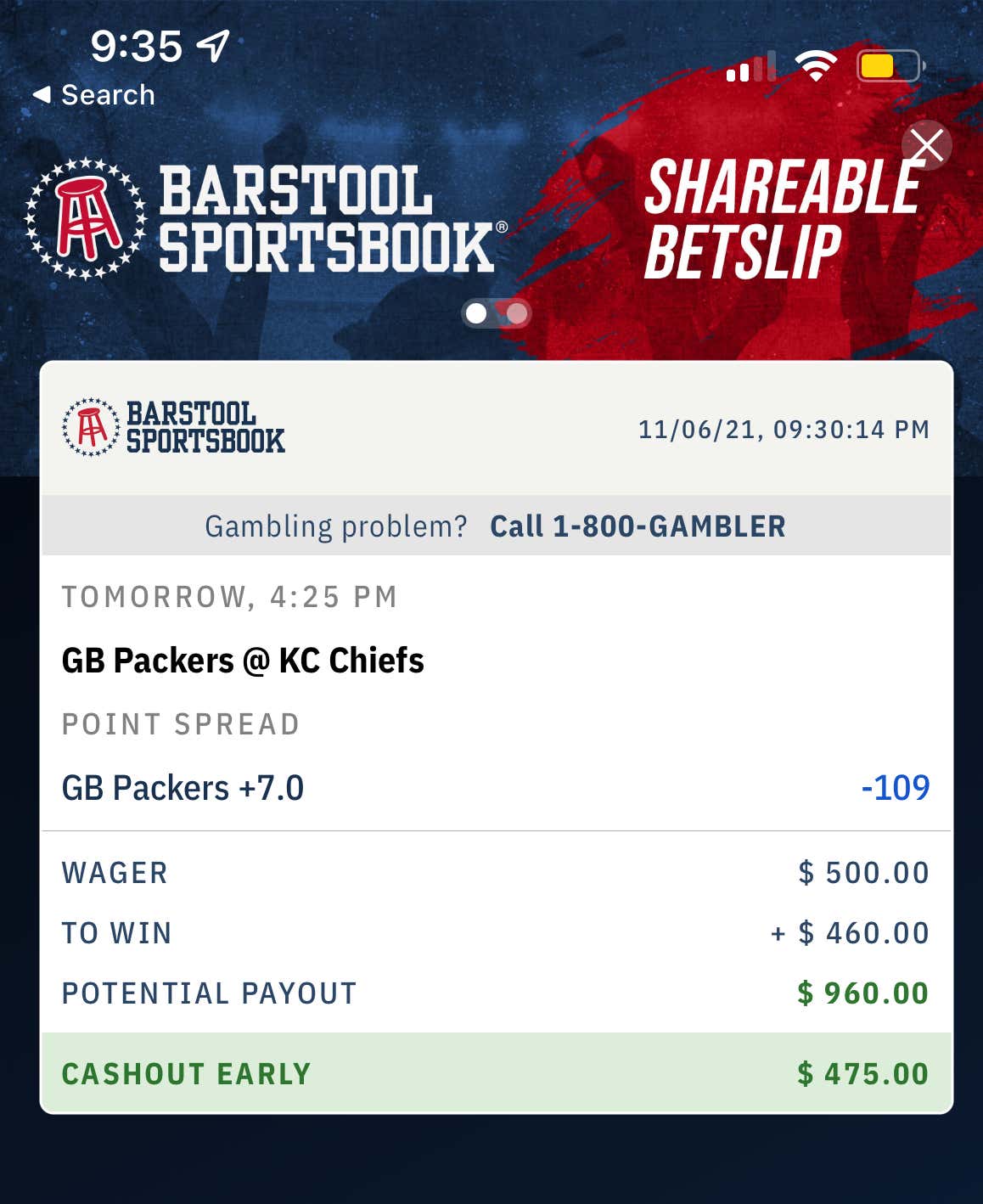 The Steelers are coming off a big road win over the Browns, while the Bears lost a third straight game with rookie Justin Fields at the helm. Justin Fields is coming off his best performance. He completed 70 percent of his throws and ran for 103 yards in the Week 8 loss to the 49ers. Chicago kicker Cairo Santos has made 37 straight field goals, another factor that could come in handy Monday night.

But HC Matt Nagy is back. And nobody neutralizes progress quite like that moron.

Expect him to suck the momentum out of Fields and the offense.

Fields’s highlight touchdown scramble last Sunday happened because the Bears’ offensive line, which has allowed the most sacks in the N.F.L. (30), again broke down and forced the rookie quarterback to escape the pocket. They are a DISASTER every year, but exceptionally awful this season.

The Steelers (4-3) traded the pass rusher Melvin Ingram to Kansas City this week, and even without him, Pittsburgh should rattle the young passer and cover the spread. 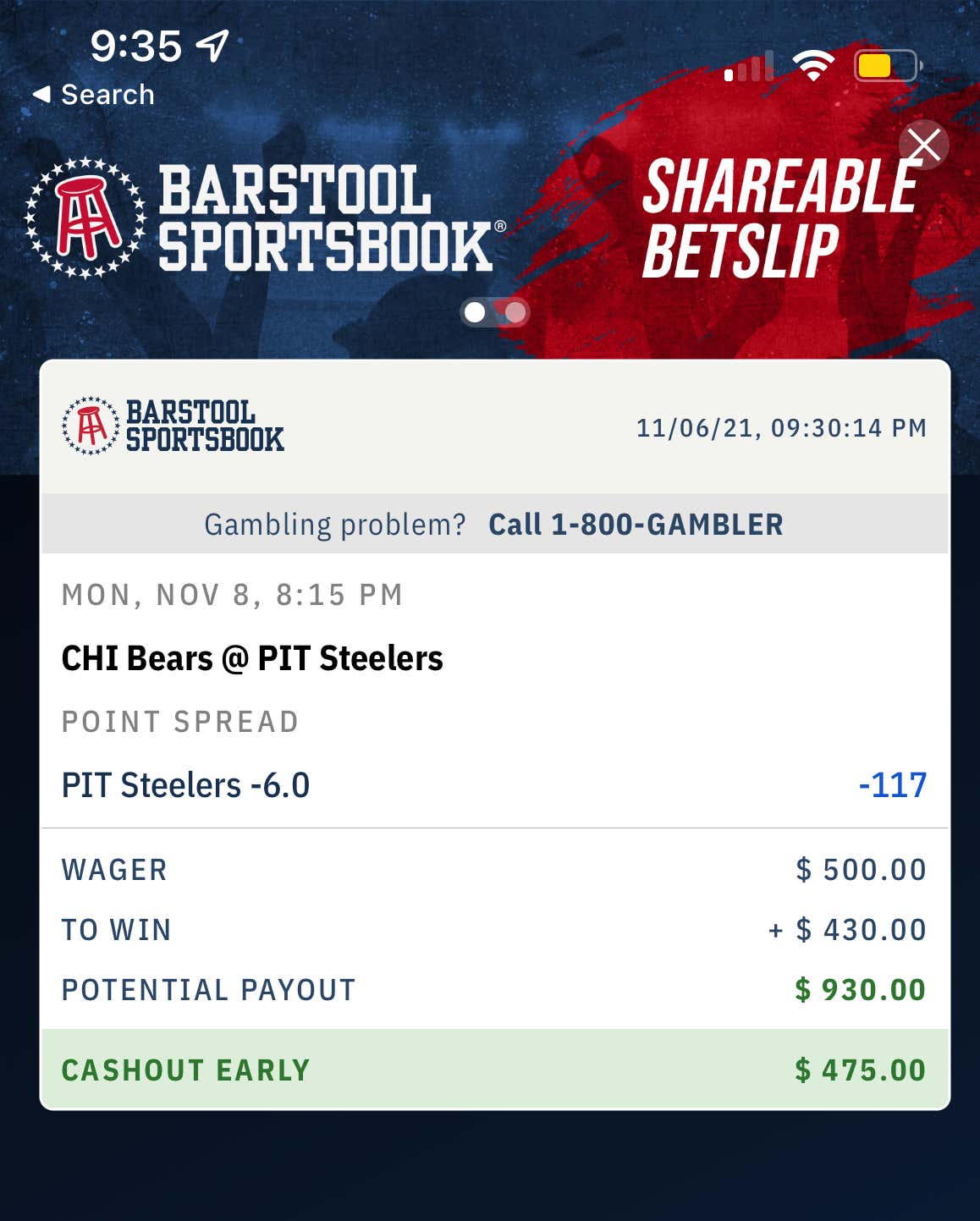 We also got some awesome news this week as local Chicago legend Marco Piemonte joined the Barstool Sportsbook.

Starting next week be sure to tail his parlays. Guy is a beast.

Kelly has been scorching this season.

Here are her plays for today-