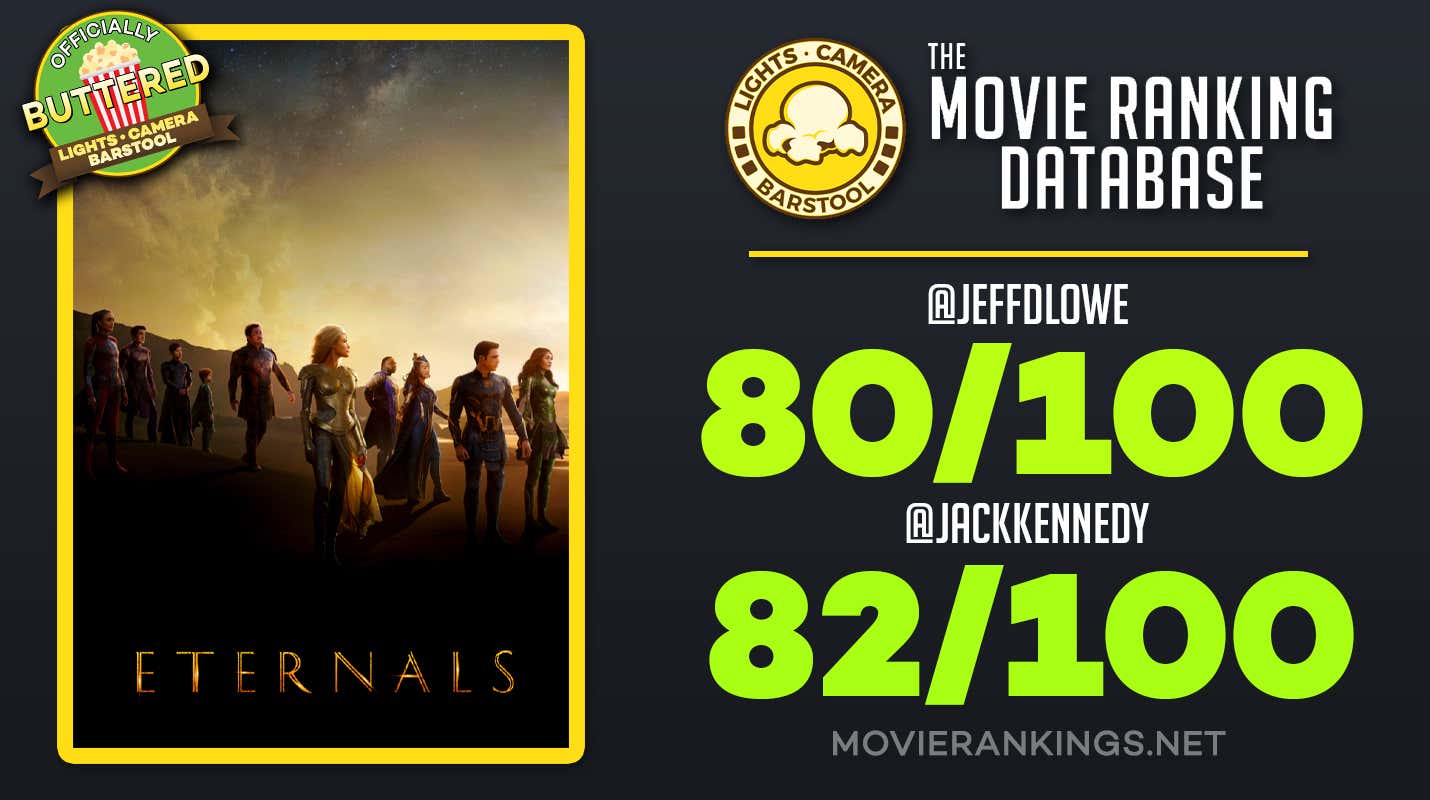 Marvel is back for its third movie this year, and 'Eternals' has arrived with some pre-release divisiveness! Is it really as bad as critics say?

The Eternals are a team of ancient aliens who have been living on Earth in secret for thousands of years. When an unexpected tragedy forces them out of the shadows, they are forced to reunite against mankind’s most ancient enemy, the Deviants. (via MovieRankings.net)

JeffDLowe (82/100): The word ambitious is one of the most overused buzzwords when it comes to movies, but 'Eternals' truly falls victim to being too ambitious. Despite some great, personal character movies, the movie is just simply "too much" for its own good. It is certainly a better movie than what critics said pre-wide release, but it is hard to not think 'Eternals' would've been better suited as a Disney+ series.

- Chloé Zhao succeeds when she can have close, personal character moments
-- We get a lot of that with Eternals, but there just isn't enough time
-- The good with the movie is truly great, but it gets too muddied down at times
-- An episode per character or pairing would've made a great Disney+ series
- Zhao's vision in terms of the look of the movie is a wild success
-- The imagery and landscapes have an immense scale and look fantastic
- There is a maturity and emotion to the story unlike most MCU movies
-- But, again, there just isn't enough time to flesh it all out
-- Some of the best characters are off-screen for far too long of a time
- Pacing becomes, possibly, the biggest issue with the movie
-- There is so much to cram into the movie that it feels rugged
-- It also feels long, you truly know you're sitting there for 2.5 hours
- It's a shame it takes a while to get going because I do appreciate the ending
- The mid & post-credit scenes are fucking INSANITY!

Is 'Eternals' a movie I will like more, or less, over time? I am not sure. I need to see the movie again, but I am comfortable with where I have it in my Marvel Cinematic Universe rankings. Unlike 'Black Widow', which never really felt above average, 'Eternals' has moments that will make you go, "damn, this could have truly been great."

KenJac (80/100): This is easily the least marvel movie in the entire MCU, which is a good thing. It’s a more universal story with only loose connections to established properties. It has a massive scope and leads us through history in a beautiful story of creation. That said, it’s pretty clunky, which is uncharacteristic for Chloe Zhao.

On the acting side of things, I think the stars are Gemma Chan and Kumail Nanjiani. Chan just radiates that royal energy that fit perfectly for her role and Kumail was hysterical throughout the whole movie. On the other side, I think both Richard Madden and Lia McHugh were pretty stiff. That hurt this movie since both of them were centerpieces of the biggest emotional moments of the movie.

On the technical side, this is an undeniably gorgeous movie. Zhao has always been brilliant at setting the perfect scene and capturing it at its visually best moment. The action flowed well and looked awesome, which was definitely something I was concerned about going into it. The sounds were also great. In fact, I think Ikarus has the best laser vision sound effect maybe ever. Ramin Djawadi also delivered what might be my favorite MCU soundtrack ever. I just think this movie mostly suffers from a very long first act. The team-up sequence just takes way too long, which felt like it lessened what was a very cool third act. I also think there were one too many moving parts for what was a predictable plot.

Overall, it is nowhere near as bad as review sites might have you believe. It is not in the same stratosphere as a bottom-tier marvel, so don’t worry about that. I’d say it is closer to the Captain America 1, Ant-Man range for me. A confused, but beautiful movie.

--
The movie is Officially Buttered, and I do think fans of the MCU will find enough to enjoy here. You can head to Lights Camera Barstool right here to listen to our latest episode where we will discuss it on our next episode.