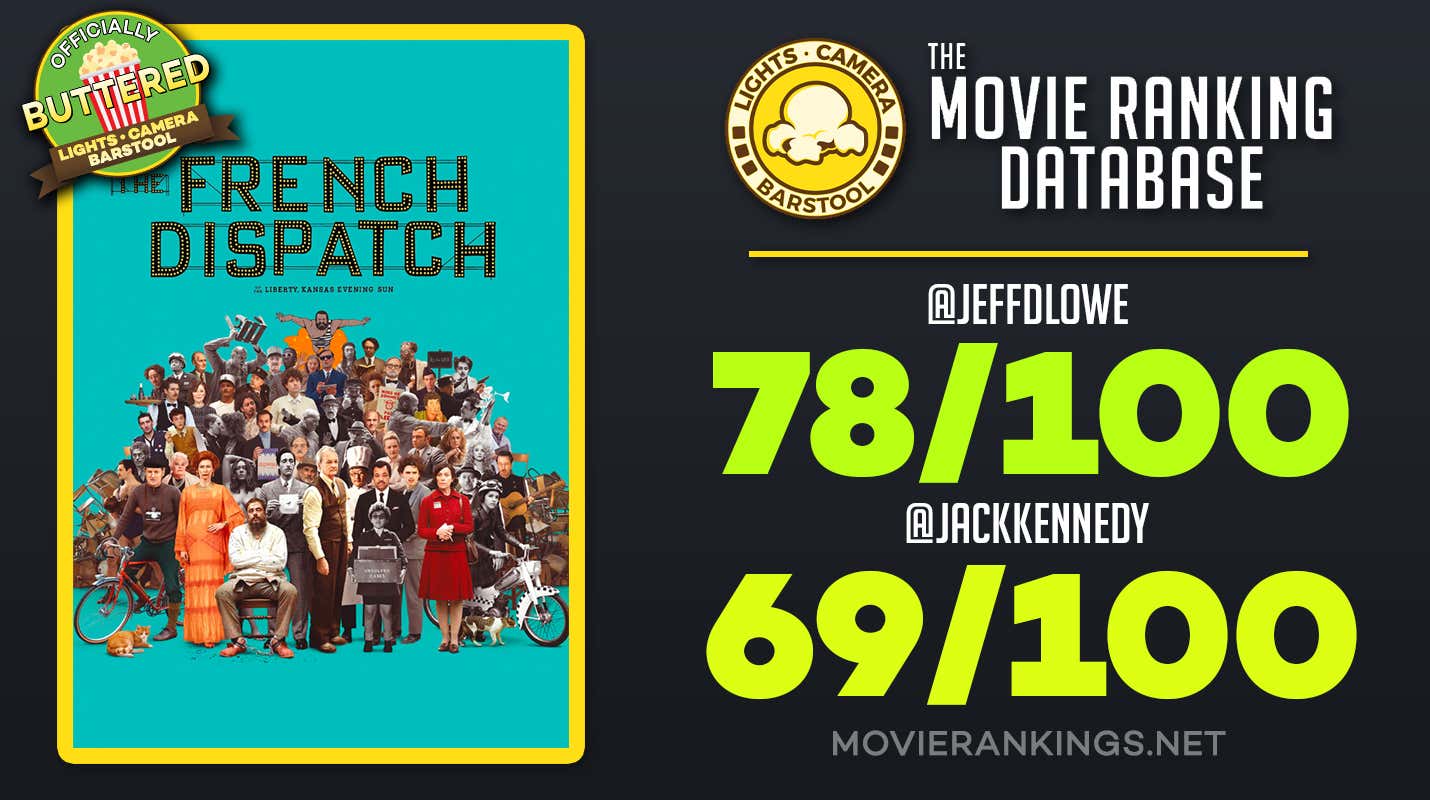 All right my fellow symmetrical lovers, it's time for a new Wes Anderson movie!

The staff of a European publication decides to publish a memorial edition highlighting the three best stories from the last decade: an artist sentenced to life imprisonment, student riots, and a kidnapping resolved by a chef. (via MovieRankings.net)

JeffDLowe (78/100): 'The French Dispatch' is as "Wes Anderson" as Wes Anderson gets and, at times, feels rather tedious, but fans of his work will likely walk away pleased. As a huge fan of Wes Anderson and his work, I may have fallen victim to a bias for his work, because even I have to admit this is close to his worst release yet.

- As always, Wes Anderson offers up a visual treat with the movie
-- The set and production design are top notch and carry the movie
- There is a creativity from Anderson that will always pull me in
- One of the short stories features a fantastic animated sequence
-- I would love to see more animated work from Anderson eventually
- While they may not all work, most of the short stories are very intriguing
-- The first of the longer three stories, and the last, were the best
- The cast is certainly large, but not everyone has a chance to shine
-- Jeffrey Wright stood out to me the most
-- I'd love to see him in this world again
- The biggest issue, and by biggest I mean HUGE, is in the structure
-- Because it is an anthology movie, there is no ability to grab an emotional connection
-- At no point, except maybe the final story, do I have enough time to care about anyone
-- This was the same issue with Isle of Dogs, but that had more time to breathe
-- It felt like a few solid, but unfinished Wes Anderson movie ideas

This is a puzzling review and score, I know, but there are plenty of elements with 'The French Dispatch' that I enjoy. Where it gets weird is the idea that I truly only have one issue with the movie… but it is a massive issue. I just couldn't connect with the characters. There is a weird sense of emptiness when it comes to substance in Wes Anderson's last two movies, it is almost as if the style has overtaken the story.

KenJac (83/100): I think there is a certain expectation going into any Wes Anderson movie, right? Every director has their own distinct style, but his maybe stand out the most compared to anyone else. That isn’t to say it’s better, just that it stands out. This movie is extremely self-indulgent when it comes to that style, and it made the movie worse as a result.

Just like with his last movie, ‘Isle of Dogs’, this movie promotes the massive cast that is attached. I mean, look at this shit! 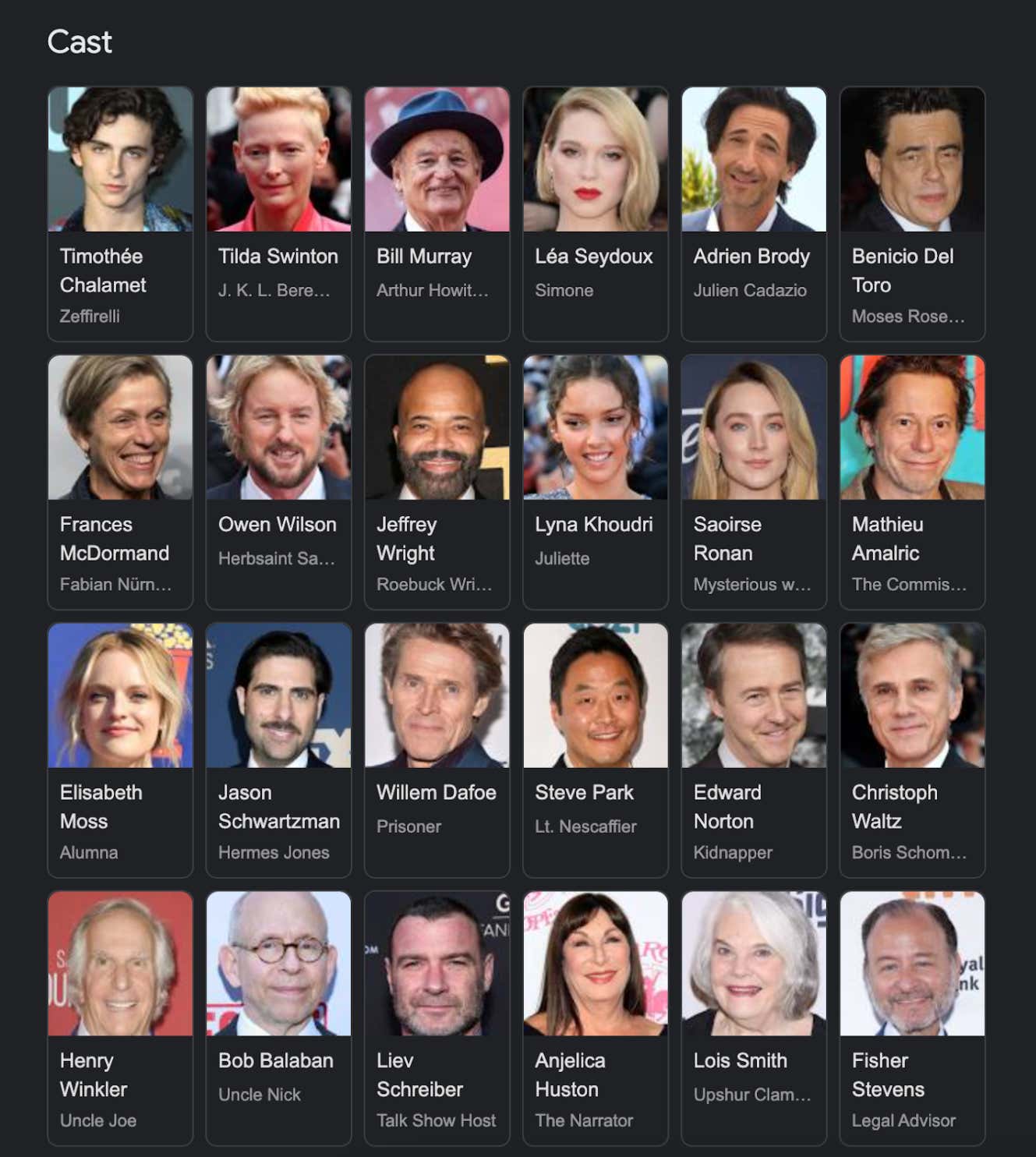 And just like with Isle of dogs, this movie really only uses like 4 of them. Murray, Dafoe, Norton, and Waltz may have a combined 10 lines. To me, that’s bullshit. Don’t cast powerhouse names in movies if you aren’t going to use them. FUCK that. I will say that there is no real fault on any of the actors. To me, the standout was Adrian Brody. I loved his character and what Brody brought to the role.

From a technical standpoint, this movie is very frustrating. It is split up into these little anthologies, and only one of them was particularly interesting. It made me mad because I know how good Anderson is in intimate storytelling, and this movie just has none of that. No soul. Just a collection of stories that are just ok. On the other side of that coin, this movie is straight-up gorgeous. Amazing shots, scenery, and music. I felt immersed in the setting and Anderson definitely checks all the whimsical buttons that his movies promise.

I think this movie is a bit like biting into the beautiful scoop of ice cream that is on the cover of every tub of ice cream, only to realize that it is actually mashed potatoes. (Yea, they really do that). It is just missing concentration, which is a damn shame.

--
The movie is Officially Buttered, but do not watch it if you hate Wes Anderson movies. You can head to Lights Camera Barstool right here to listen to our latest episode where we discussed it on our previous Sunday episode.