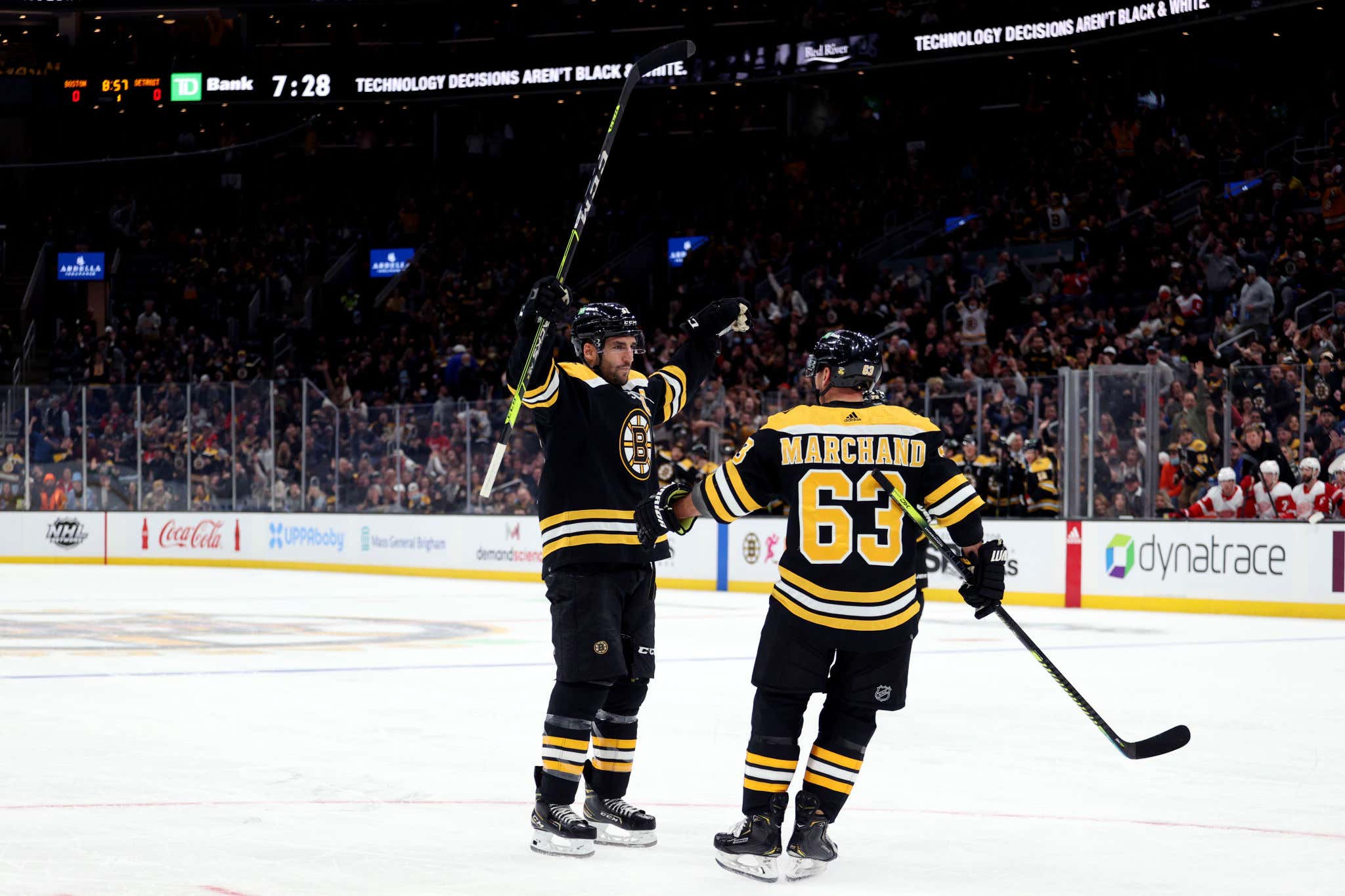 Patrice Bergeron scored FOUR goals to lead the B's over the Detroit Red Wings for their second straight win. LET'S GET INTO IT…

With Vlad Namestnikov in the box (playing without a helmet) the B's made quick work on the PPG, Patrice Bergeron with his first goal of the year. 1-0 Bruins.

The Bruins held the Red Wings to just three shots on goal in the opening period.

Patrice Bergeron added a 2nd PPG late in the 2nd to extend the lead. 2-0 Bruins.

Patrice Bergeron capped off the hat trick late in the 2nd. Once again, on the PP. 3-0 Bruins.

Lucas Raymond ruined Jeremy Swayman's shutout, Detroit finally cashed in on a 5 on 3 (with Pastrnak & Bergeron in the box) 3-1 Bruins.

Mike Reilly followed up Curtis Lazar's shorthanded breakaway and recorded his first goal as a Boston Bruins. His first goal since January 28, 2020 as well. 4-1 Bruins.

Make it four. Patrice Bergeron scored his 4th of the game late in the 3rd. 5-1 Bruins.

- Father Time who? Entering tonight Patrice Bergeron had yet to record a single goal, ending tonight he tied Brad Marchand for the team leader in goals with four. Bergeron capped off the natural hat trick tonight in the 2nd period, then added a fourth late in the 3rd. First three goals on the PP, then a 5v5 goal late in the game. Nice to see him get rewarded tonight. 2nd career 4 goal game. The man was unstoppable tonight.

- Brad Marchand had himself a four point night, all assists on Bergeron's goals. McAvoy with two.

- Thought the 3rd line had a really productive night despite not getting on the scoresheet. They had some really good chances, Haula nearly converted on a breakaway after DeBrusk laid out to block a shot. Workman like night for them. I believe Nick Foligno has been skating on his own, remains to be seen when he'll rejoin the team however.

- Mike Reilly picked up his first goal as a Bruin tonight, shorthanded in the 3rd. Cleaned up Curtis Lazar's drive to the net. Picked up an assist as well on Bergeron's 4th.

- Shout out to Cliffy Hockey… he played in his 100th NHL game tonight. Nice milestone for him.

- It was Jeremy Swayman's night in net. Thought he looked good. Calm, cool, collected. Didn't see a ton of pucks but finished the night with 14 of 15 saves. Linus Ullmark will get the start on Saturday night when the B's head to Toronto to play the Maple Leafs. Bruce Cassidy will evaluate the goalie situation from there…