What a life Terrance Gore lives. Wakes up, steals a base, goes to sleep, wins World Series ring. Rinse and repeat. An absolute speed freak who makes his living by being a pinch runner. Possibly the fastest guy in baseball and he just happens to be on the right teams at the right time. The Braves World Series gives Gore his third career World Series ring which means he has more rings than RBIs. Yes, you heard that right. He also has more rings than postseason at-bats in his career. But I can't act like he's an everyday player. He's only played in 102 games, had 77 plate appearances, and 19 total bases over his career. He just happens to find himself on really good teams at the right time. 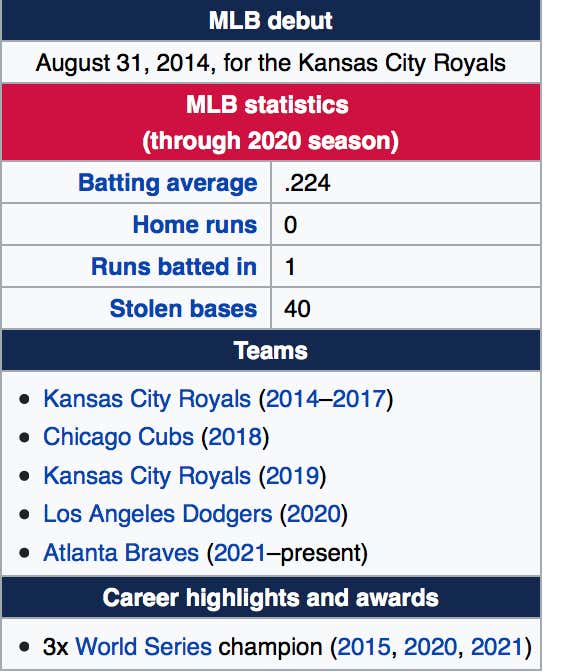 Look at those names, those guys hear the name "Terrance Gore" and think to themselves "man, I wish I had the career he does." A lifetime .224 hitter with 1 RBI, 0 home runs, 3 extra base hits and 40 stolen bags. He knows his role, he's a hell of a clubhouse guy and is faster than everyone. If his number is called in the playoffs he's going to snag a base, a lifetime 5/6 on the base paths in the playoffs. Right place at the right time, I guess. Just know if you show up to your clubhouse and you see Terrance Gore, theres a decent chance you just won yourself a World Series ring.