Now, you might not be one of those people whose entire week revolves around three hours of football on the weekend. And if so, you live a sad, hollow existence and I pity you. For many reasons, not the least of which is you will never experience the thrill of Football Zebras announcing the officiating crews in the middle of the week. Truly, you're missing out and I can't imagine what you fill your days with otherwise.

Normally the names don't mean a hell of a lot. But not this week. Not with the Patriots heading to Carolina for the first time since 2013 and drawing the short straw that is Clete Blakeman.

Now, if you're a big Deflategate buff, Blakeman's name will sound familiar because he was one of two officials assigned to the infamous 2014 AFC championship game against the Colts, but in street clothes. Working undercover or just acting as a spare; I have no idea why he was there. But when Mike Kensil's sting operation was hatched at halftime, Blakeman was one of the two officials measuring the Patriots footballs using two entirely different gauges, one with a Wilson logo one without, one with a short, straight needle and the other with a long, bent one. And most significantly, one measuring almost half a psi lower than the other one. And with an operation that professionally carried out, it's no wonder the evidence of cheating was so overwhelming that the Patriots were convicted beyond a reasonable doubt it was deemed more probable than not Tom Brady was at least generally aware of it. Anyway, with Blakeman as either a patsy or a willing co-conspirator, Ted Wells got a conviction in Judge Roger Goodell's fair and impartial courtroom.

But I digress. While that still goes all the way up my crack, it's no more ironic than rain on your wedding day or 10,000 spoons when all you need is a knife. What does satisfy the definition of the word I put in the title is that the last time the Pats went to Carolina, Blakeman made history by picking up the flag on the most blatant penalty of all time. Luke Kuechly's blatant pass interference of Rob Gronkowski in the end zone as time expired with the Pats trailing 24-20. 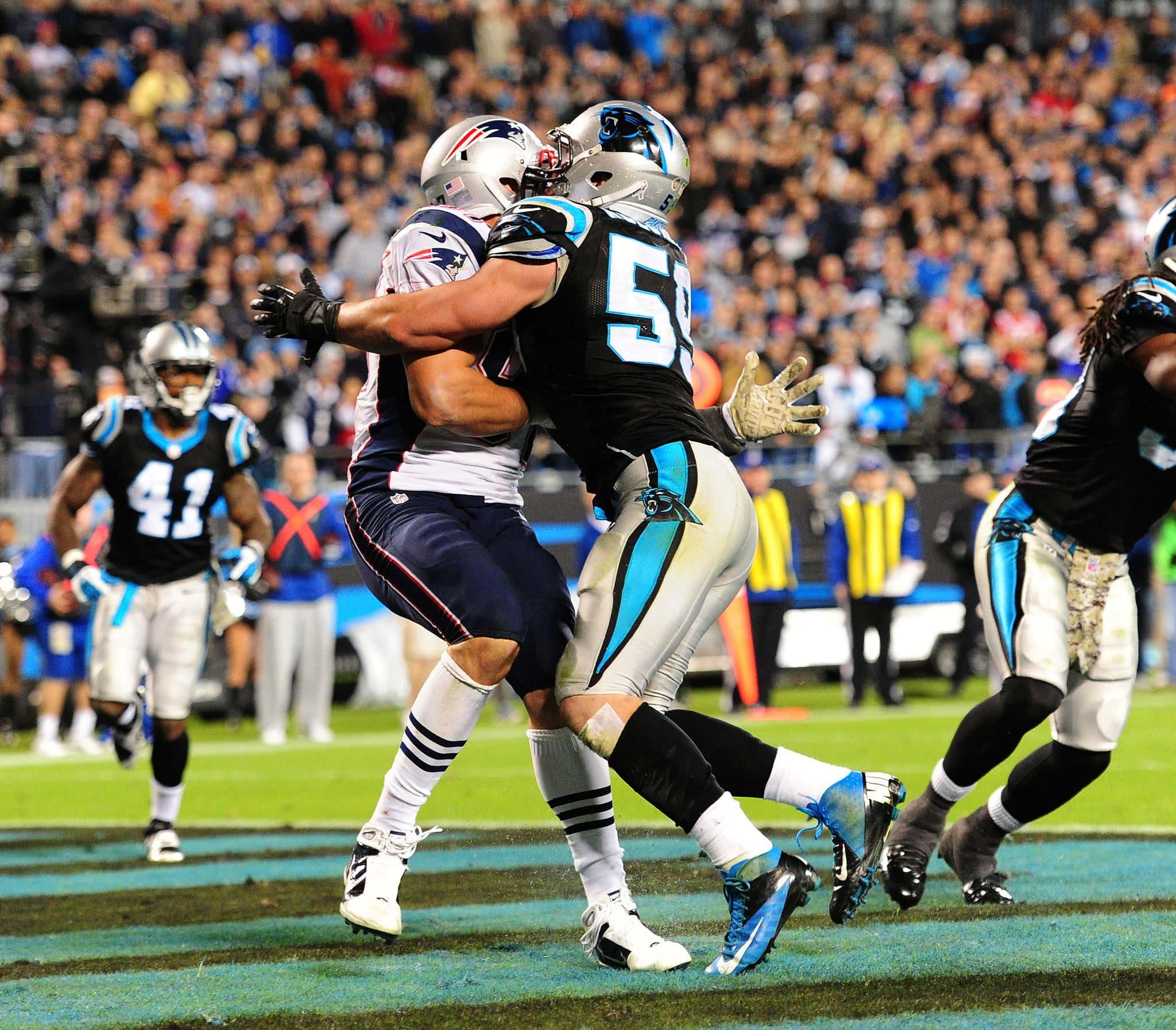 A non-call so egregious that ESPN - ESPN! - disproved every excuse Blakeman and the league offered up for it, scientifically:

Brady's pass was in the air. Bear hug by Kuechly. It was catchable given that the target of the throw was in his athletic prime and had the catch radius of Vishnu. Grab by Kuechly. Robert Lester picked off the pass because Gronk was being ridden out of the play. Tackle by Kuechly. Blakeman's crew member Terrance Miles saw what everyone in the stadium and millions at home saw. Pass interference by Kuechly. But the referee, in his infinite wisdom, decided what Kuechly did was none of those things, but was something else entirely. Something allowable under the rules of football on Planet Blakeman.

At the time I was doing the Patriots pre- and postgame show with Michael Felger, and he argued with me that he liked the decision because he likes when games are decided not by the officials, but by the players on the field. To which I had to explain (without grinding my teeth into a fine powder) that by picking up the flag, Blakeman absolutely decided the game. And if he'd let the (extremely, obviously) correct ruling on the field stand, there would've been one untimed play from the Panthers 1. Line them up, 11-on-11, one down for all the marbles. But the bias of the Boston media knows no bounds.

As a result, the Pats fell to 7-3 on the way to 12-4 and lost home field advantage throughout the playoffs. So they had to travel to Denver and face the most prolific offense of all time on a sunny, pleasant, 63-degree day, instead of forcing a surgically repaired Peyton Manning to beat them in the Chekovian winter hellscape of Foxboro in January.

So thanks for that, Clete.

I don't think there's much bad blood between Belichick and Blakeman. Or if there is, Belichick hides the resentment and even books his old nemesis to official scrimmages and joint practices in camp. But for sure no one else in New England will forget the royal boning he gave us. But it's not necessarily a negative for Sunday. If you believe in the Seinfeld concept of Even Steven:

… then the universe - and this official - owe us one. A huge one.