The Bulls are the hottest piece of ass in Chicago right now so let's get a little deeper today heading into tonight's Celtics game.

Specifically there's a breakdown circling twitter right now about Zach LaVine that's very much worth the time and attention of any Bulls fan that can't help but See Red. Little longer at 12 minutes but you can speed up if you need to. I'm not calling it a Must Watch by any stretch of the imagination but rather want to just level up with my Bulls guys about how much better LaVine has gotten in Chicago.

It's still crazy to me the Bulls are emerging as a national storyline this early. I know it can fall apart quickly but it really felt like our little secret before the season started. People paying attention thought they'd be much improved but idk if anyone expected a top 5 defensive team. There's plenty of reasons to be bullish but for now I suppose we just stick to LaVine. On that note let's start with some observations:

- LaVine is +325 to be the lead scorer tonight and if you watched above, you can understand why. He's a consistent threat and a tier-1 scorer.

- People think of LaVine getting to the rim but it's actually startling to hear how good he's been catch and shoot. The fact he's grown into a top-10 shooter off the pass flies under the radar so hard. 45% from the corner. 46% when catching in rhythm. Now he's getting screens from everybody on the court and it's letting him take off.

- DeRozan is such a beast in the midrange which works so well with LaVine's two-man game. It creates a matchup nightmare for opposing teams and that's just 6 games into this experiment. The Bulls have been exactly average this year offensively and everyone with common sense knows that's going to drastically trend upwards the more comfortable they get playing together.

- This chart was downright staggering 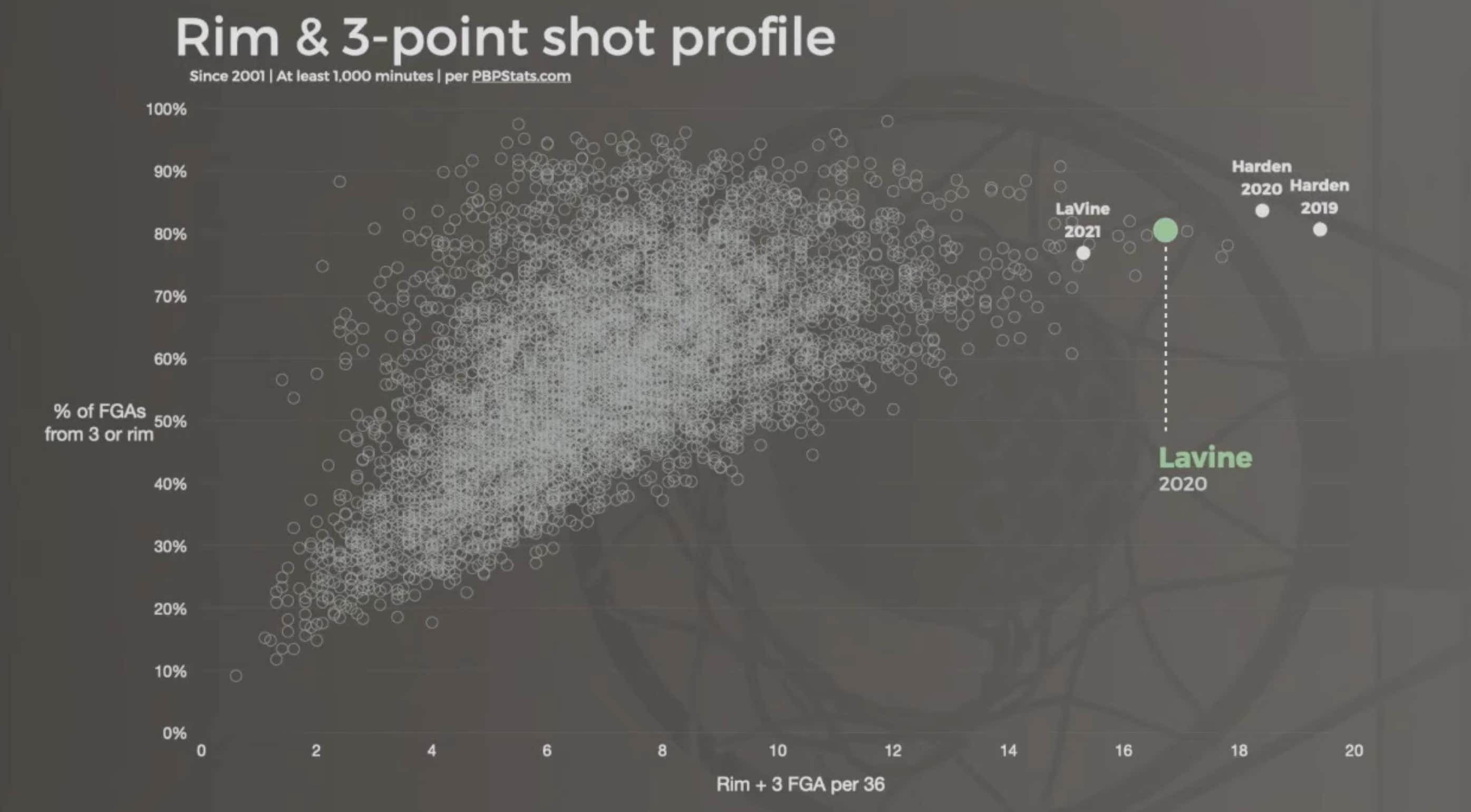 That's pretty good company when talking about balancing the inside/outside part of your game.

- There's still time and room to be picky defensively. For now I like that he's consistently active even if he doesn't have the fundamentals down perfectly. That's classic LaVine to me. He's constantly improving and nobody can question the work ethic. So push come to shove, there's promise to me that he stays on the improvement train. The alternative is much worse = at least he's getting better.

- Still disappointing to hear LaVine is a fringe All Star caliber player. I think a lot of us have seen him take steps to be less selfish. It certainly feels like all he wants to do is win. At least that's what you can interpret from his actions over the years. The guy has legitimately transformed himself into a bonafide franchise caliber player. He's done it with some god awful teammates under embarrassing leadership. I'd be surprised to know what other NBA players would thrive under GarPax and Boylen when you're running pick-n-roll with Thad Young. (No offense Thad. we miss you.) Point is LaVine has grown with such weak support that it's almost impossible to suggest he won't keep getting better. To think he's gotten this far means there has to be more runway. But that's just me. Classic meatball sucker.

- Bulls vs. Celtics tonight 6:30 Central. Such an elite time zone when you really think about it. Don't forget to get a piece of this action: