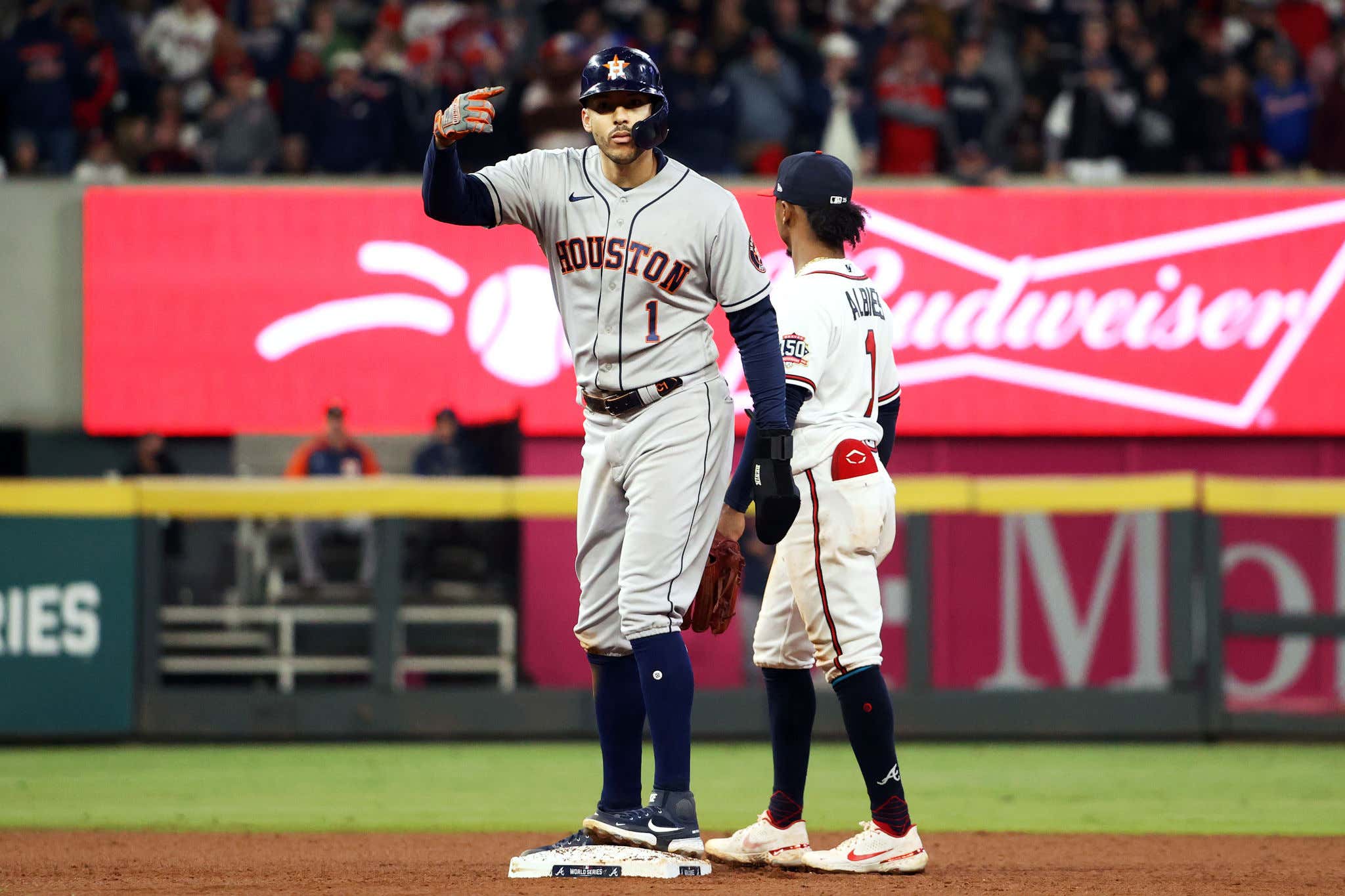 I am here to report that once again an Atlanta sports team has Atlanta'd. The Braves had a golden opportunity Sunday night to win the World Series in front of a raucous home crowd. After getting a scoreless first from someone named Tucker Davidson, Adam Duvall blasted an opposite field grand slam off Framber Valdez to put the Braves up 4-0. Mayhem ensued.

The Braves had done it! The World Series was theirs. Big T down there to celebrate as Truist Park transformed into a mad house. Get the champagne ready right? Surely an Atlanta sports team in a championship clinching scenario with an early lead would go on to get the job done, right? 3-1. Nope, those are certainly not the rules in this universe.

The Stros shook up their lineup before Game 5 and it couldn't have worked out better for them. Gurriel moved up to the clean up spot and collected three hits. Alex Bregman slid down the order to the 7 spot after a dreadful series to this point. He came up in the 2nd with two men on and naturally drove home Houston's first run.

Martin Maldonado drove home the second run that inning on a sac fly and all of a sudden the deficit was cut in half. Carlos Correa was moved up to the 3 hole in this one and came up with three knocks himself, driving in a run for Houston on a double in the next inning. In less than 3 frames Atlanta's lead was gone.

The biggest at bat of this game came in the 5th with the bases loaded and Maldonado up at the dish. The Astros catcher isn't known for his stick, but instead brings an invaluable presence behind the plate to manage this pitching staff. In the 5th inning while leading 5-4, A.J. Minter could not find the zone for Atlanta with the bases juiced. Ahead in the count 3-1 Maldonado squared around to bunt last second which may have distracted Minter enough to lose him and walk in the tying run.

Mind games like that will fuck with a pitcher when he's lost. The Astros catcher's 3 RBIs on Sunday came via a walk, hit, and sac fly becoming the first to ever do that in a World Series game.

From that point on the Astros never looked back. Marwin Gonzalez came in to pinch hit the very next AB and dropped in a two run single to give Houston the lead.

All the momentum Atlanta had built up in that first inning was gone and Truist Park was silent. The Astros went on to win 9-5 outscoring the Braves 9-1 after that first inning grand slam. It's the largest comeback by a team facing elimination in a world series game on the road since 1919. Anyone really stunned? Of course not. Well now the World Series shifts back to Houston for Game 6 and potentially a Game 7. The pitching matchups favor the Braves with Max Fried and Ian Anderson lined up to go. Houston looks like they're going with Luis Garcia on short rest in Game 6. Does any of it really matter? You'd think after Framber got rocked early in Game 5 that Atlanta would step on Houston's throat and coast to a series clinching win. Not even close. Anything can happen and that's the beauty of it. The Astros are motherfuckers and will not hand you this championship in any way. Atlanta is going to have to mash or get an absolute gem from one of their horses.

See you back here Tuesday night. Welcome to November baseball.