We are already upon the halfway mark. Can you fucking believe it?

Wait, hold up. What's that?

I'm being reminded that this year we are putting these men through a torturous 17 game regular season schedule, not 16.

So technically we're a half of football away from being at the halfway mark.

But that won't stop us from analyzing the playoff picture as it stands today.

Last week was another crazy week in what has been a WILD first two months of football.

But we turn it around today. Here's who I'm feeling I'm plums for WEEK 8.

1st off, remember this shit?

The Chiefs are a mess right now, managing to score only three points last week in a blow out loss against a Titans defense that gives up six yards per play and hadn't looked good at all over the first part of the year.

They have a major turnover issue that hasn't gone away, and the defense can't be relied upon to pick up the slack as it has the worst yards per play allowed in the league.

Oh, and their players also hate their fans.

I'd be alright with the Chiefs laying double digits against a team with absolutely no offense like the Texans, but the Giants can score points if the offensive line doesn't fold, and with the Chiefs managing just eight sacks in seven games, this might be a sneakily decent matchup for that unit.

The Chiefs also give up an NFL-high 6.6 yards per play. Even though we can expect a bounceback from the K.C. offense (it helps that Giants safety Jabrill Peppers is out) the Chiefs' defense will leave the backdoor open.

New York has already covered at Washington and New Orleans (they won outright).

Yes the Giants got their doors blown off at Dallas but that was a game in which Daniel Jones got knocked out early. 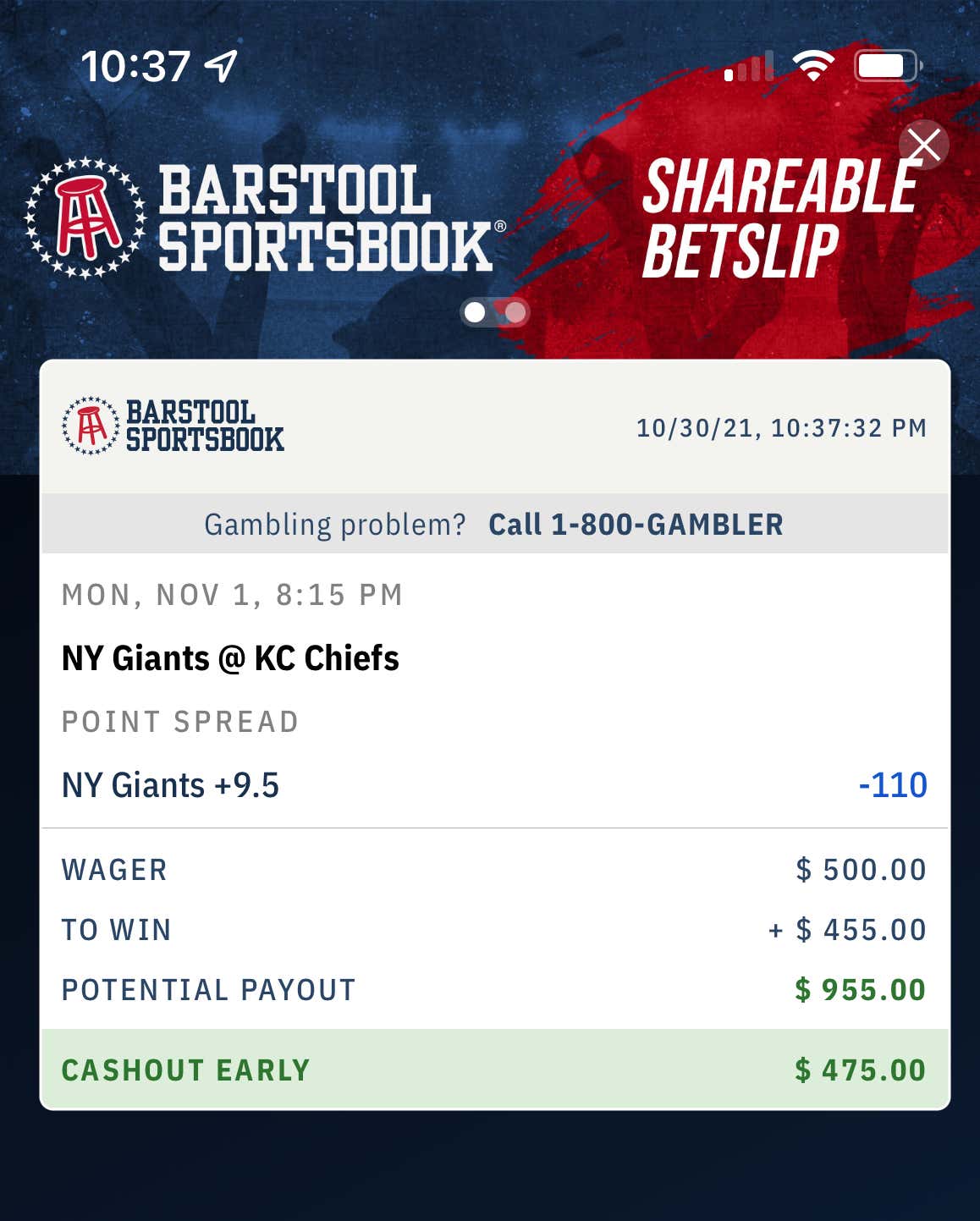 This line moved 5.5 points since it opened earlier this week.

You can make a strong case for Minnesota even if Dak Prescott were playing, but there was a legitimate concern that he wouldn't since his grandma passed away Thursday.

It looked like her funeral would be today, and that Dak would be a gametime decision. But seems he flew out with the team after all so expect him to play.

Both teams will be coming off bye weeks, rested and ready to go. That means we should get a very good, competitive game.

Cooper Rush knows the system well but has only thrown three regular-season passes. The Vikings are better than their record -- remember the easy field goal that would have beaten Arizona and the OT loss to Cincinnati? I like Minnesota at home in this. 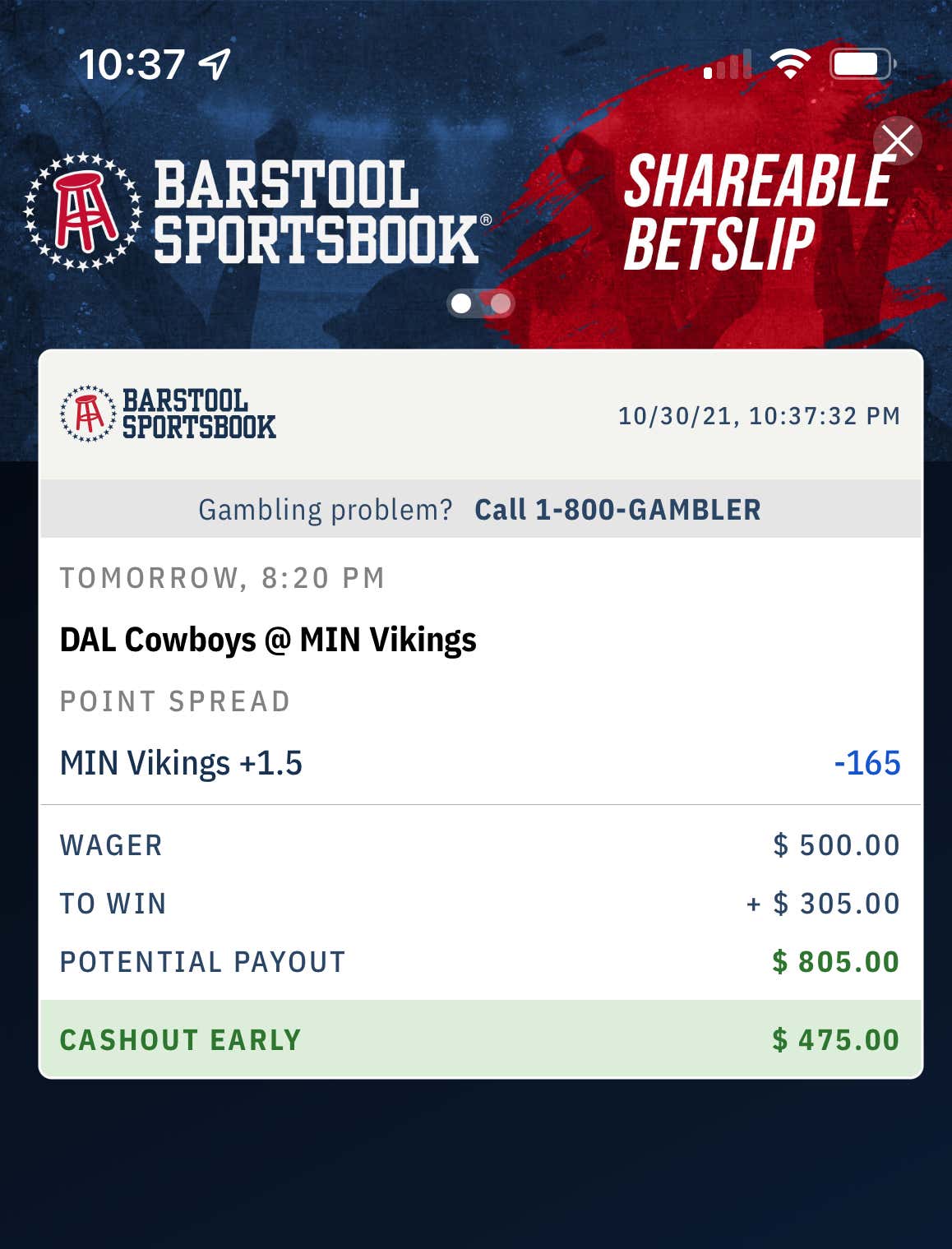 The young Jags come off a bye following their first win in London.

The Seatlle offense has struggled to do much of anything with Geno Smith at the helm, following up an ugly first half against Pittsburgh with an ugly first two halves against New Orleans.

But those two teams have very good defenses, while the Jaguars, to put it simply, do not. (They've allowed a league-worst 8.5 net yards per pass attempt, struggling to contain the likes of Tyrod Taylor, Teddy Bridgewater and Tua Tagovailoa.)

(Their only solid day against the pass came when they were giving up 130 yards and three TDs on the ground to Derrick Henry.)

The Seahawks no longer have the worst defense because of playing in a downpour Monday night, now they’re second-worst statistically right behind Jacksonville who is third-worst.

Today will be the toughest road environment Trevor Lawrence has faced in the NFL up until this point.

I expect him to make a couple key mistakes to help Seattle's cause.

The Jaguars allow just 3.8 yards per carry but have no one to match up with D.K. Metcalf and Tyler Lockett on the outsides. (Expect them both to go off)

Against the Dolphins in Week 6, Jags corner Nevin Lawson allowed six catches on eight targets for 100 yards and a touchdown. Seattle did not let Geno Smith air it out at Pittsburgh or versus the Saints' elite defense, but the Seahawks should be more aggressive in this matchup.

Jacksonville gives up the second-most long pass plays in the league. Lay the points. 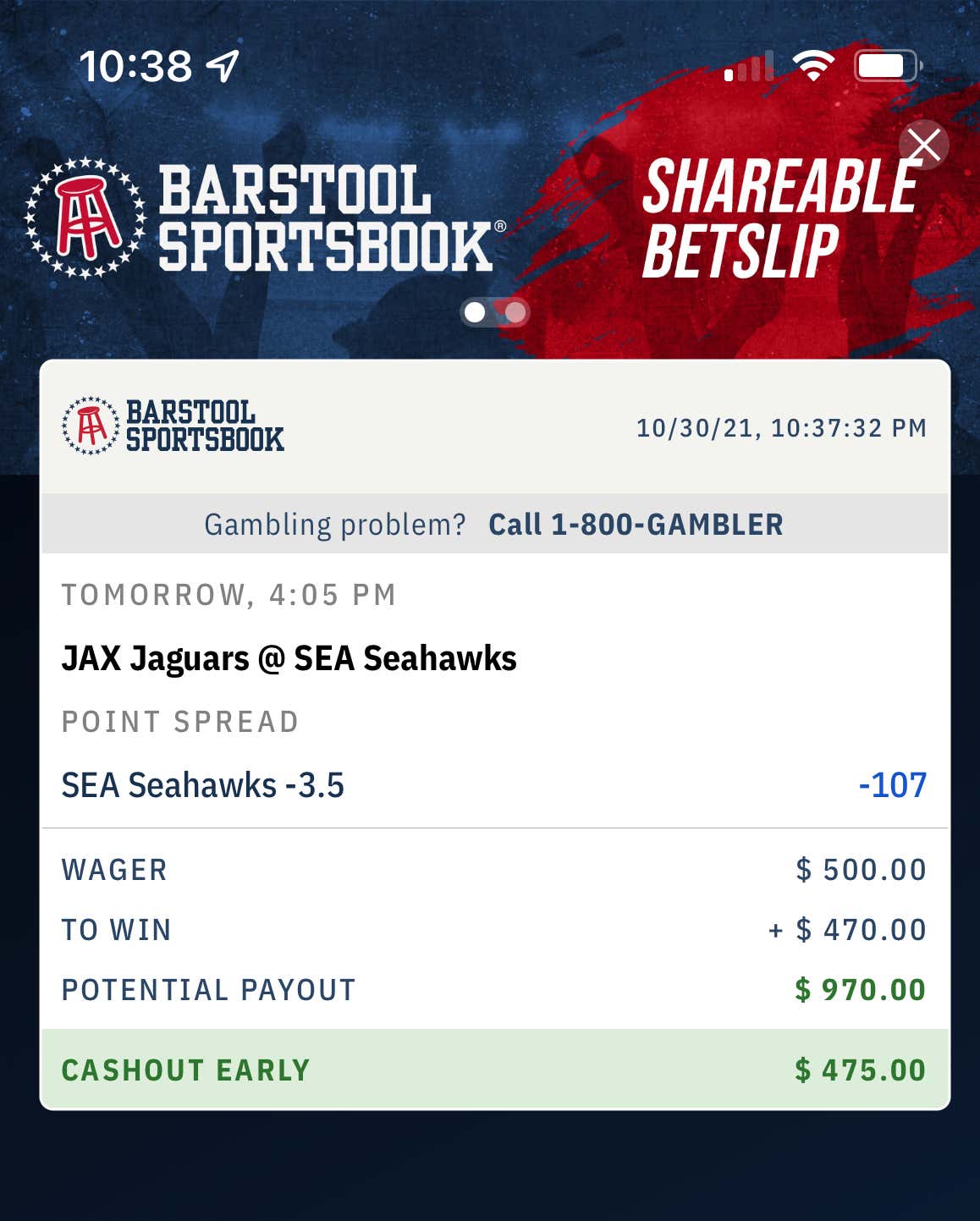 Still one of my favorite clips I've ever seen.

The market has put Tampa Bay back at peak value coming off another easy win, but the injuries sustained by this team could catch up to them.

The Saints meanwhile came out of their bye week much healthier, though the offense didn't exactly light up Seattle in a tough spot on the road with bad weather.

The Saints defense was a tough nut to crack for the Bucs last year, averaging less than 300 yards per game in three matchups.

The Bucs have rolled against bad teams but barely beat the Cowboys and Patriots, while losing to the Rams, and I think the Saints are closer to that group than the pushovers Tampa Bay has beaten. Don't be shocked if the Saints win outright in this one.

This line has fallen at a few books to 4 or less. Tom Brady is lighting up the scoreboard but he hasn't faced a defense like the one he'll see Sunday in New Orleans. With Marcus Davenport and Kwon Alexander back, the Saints are elite at all three levels.

New Orleans, which has covered 11 of its last 13 as an underdog, made the Bucs' offense look disjointed in last year's matchups. Antonio Brown remains out. Back New Orleans to at least keep this close. 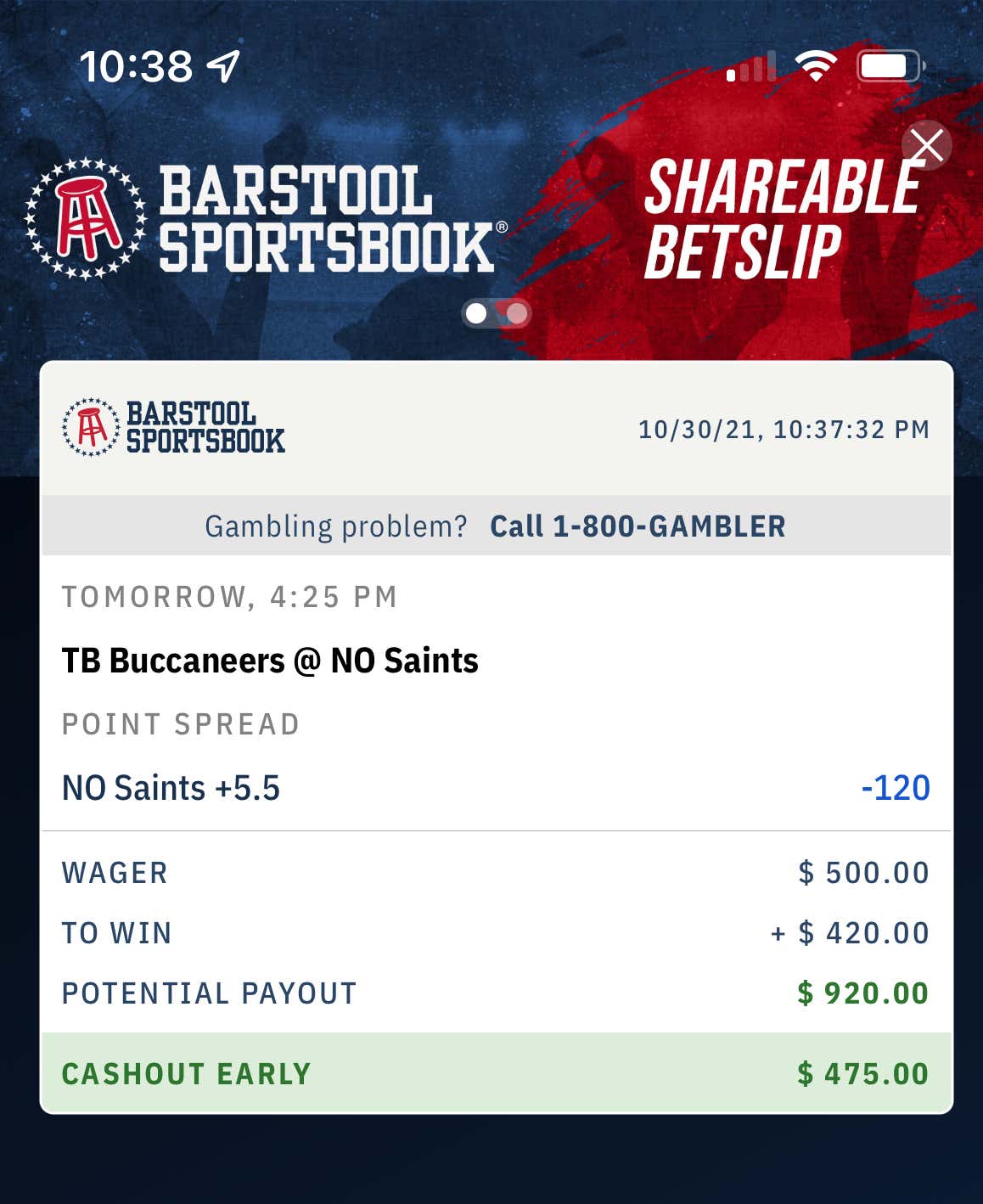 Who remembers this Bears team?

So that means Special teams coordinator Chris Tabor will be calling the shots.

Not only will they win, but they'll look dominant. Like the team they would be had they not had Matt Nagy holding them back.

Kyle Shanahan is 5-13-1 ATS when laying more than a field goal.

The Bears have looked like a (somewhat) competent team at home, beating the Bengals and Lions and nearly covering against the Packers. (Somehow)

With a play-caller with a brain, Khalil Herbert (4.8 yards per carry) will have success against a middle-of-the-pack San Fran rush defense, giving Justin Fields some manageable third downs. Expect to see the first play-action calls of his Bears career, and possibly some calls to move the pocket and use his mobility as well now that Nagy is out of the picture.

Should be a great day and major bounce back for Fields.

On the other side of the ball, it's a homecoming game for Chicago native Pretty Jimmy Garoppolo. Who clearly misses his TE George Kittle, who won't be back Sunday.

The 49ers also will be without starting strong safety Jaquiski Tartt, and pass rusher Dee Ford is in the concussion protocol.

There are some injury concerns for the Bears that need to be taken into account - Chicago will be without Pro Bowl pass-rusher Khalil Mack due to injury. Stud defensive tackle Akiem Hicks missed Week 7 and is in major question, too.

But I think the Bears have a lot to prove. This San Fran team desperately needs a W to keep any chance of a post season dream alive. They play better on the road than at home. But I think the Bears come out way too fired up, and actually execute today. Showing their fan base not only what they're capable of, but tormenting them with memories of it the last half of the season when Nagy comes back and returns to nose-diving the team. 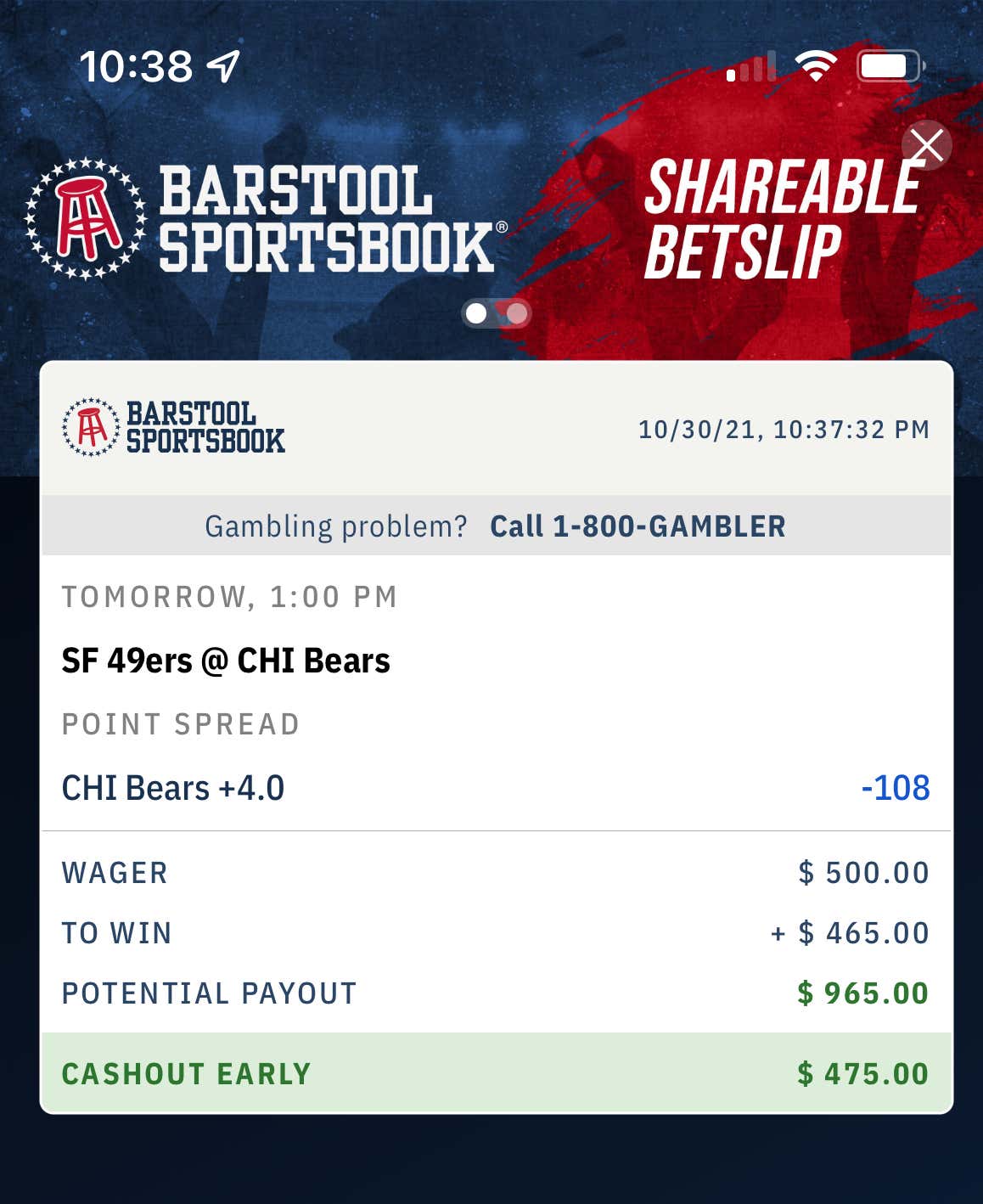