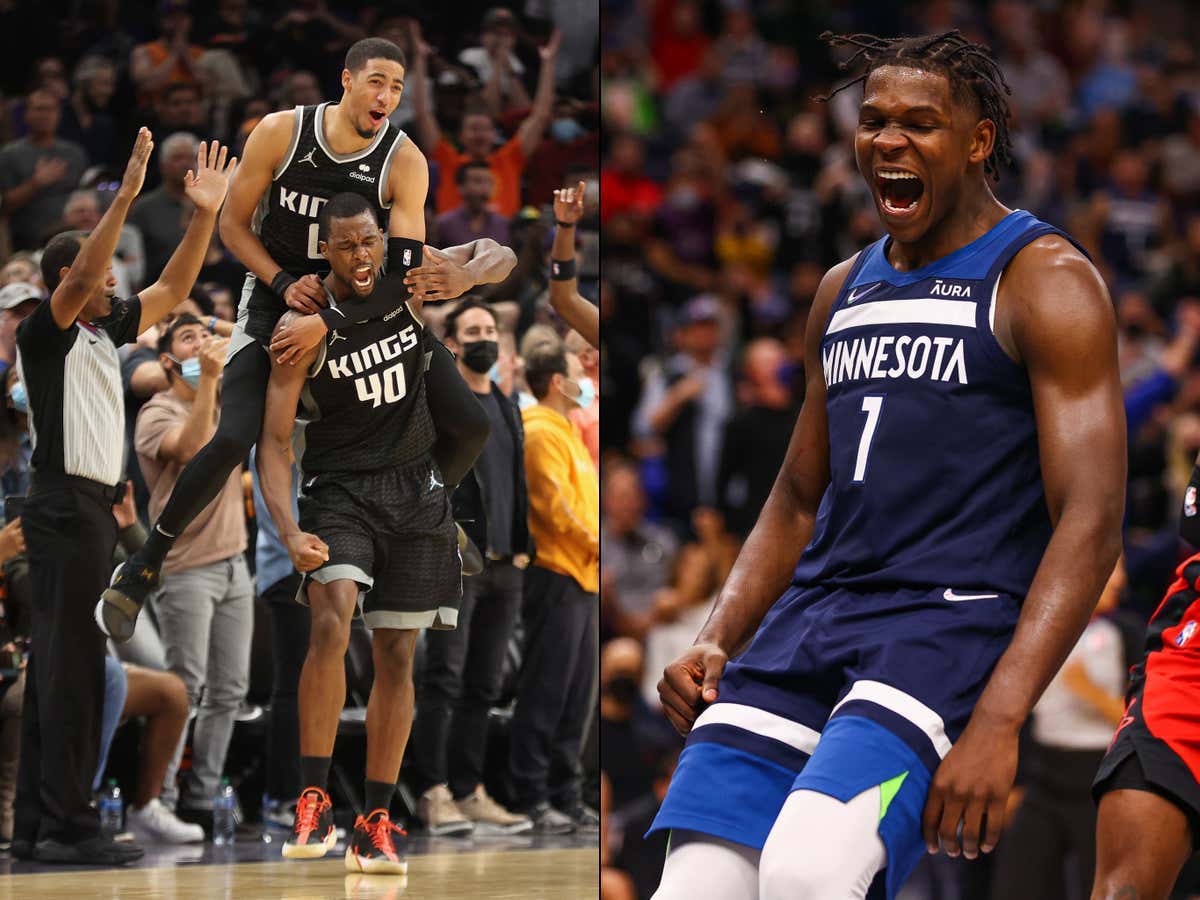 For some, the start of the 2021-22 NBA season hasn't quite gone as planned. Teams that were talked about as being title contenders like the Nets, Lakers, and Sixers might actually stink. Teams that some fans were hopeful would show new life in a new season are still doing annoying shit that's costing them games like the Celtics and Blazers. Some teams like the Suns might be regressing back down to planet earth. And while it's true that we are technically early in the NBA season, I do want to shout out two teams and give their fans something to be happy about. There's no doubt that when it comes to the most tortured fanbases in the league, two teams immediately come to mind.

The Kings and the Wolves.

Sacramento hasn't make the playoffs in 15 years. The Wolves have 1 playoff appearance in the last 17 years. Whenever you hear about these teams it's always about how their best player needs to demand a trade to a big market whether that be De'Aaron Fox or KAT. That has to be annoying as a fan and you know what? They deserve better, especially given how both of these teams have started the year. The talk about them when things are going well should be just as loud as all the talk about how their best player needs a new team.

Without a doubt, one of the early surprises has to be how these two teams currently look. The Wolves sitting at 3-1 coming off a wire to wire win on the road against the Bucks and the Kings at 2-2 coming off Harrison Barnes' game winner on the road against the Suns. You look a little deeper and you can see the signs of why fans should be pumped right now. Did you know the Wolves have the 5th best defense in the NBA to start the season?! We saw to end last year what the DLo/Edwards/KAT trio could do offensively, but the big thing that was always holding them back was the fact that they couldn't defend for shit. Overall, they have a top 10 net rating to start the year which is not something that ANYONE predicted. Their trio look great to start the year which is really more of the same based on what we saw over the last month of the 2021 season. KAT is putting up 28 a game on 55/52% splits with 3.3 3PM a night. That's legitimately insane. Edwards is taking 10 3s a night and making 36% of them on the way to his 25 points per game average. DLo's efficiency has been spotty, but he's been solid for the most part.

The point is, the Wolves are not only fun as shit to watch, they're actually showing sings of real improvement.

For the Kings, there's a chance we're seeing a Year 11 leap for Harrison Barnes

I mean where the hell has this been?? When it comes to the Kings, everything has been a mess for a long time. But if you want a reason to think maybe they are turning some sort of corner, how about the fact that Davion Mitchell has come into the NBA and is legit shutting down All Star talent on a nightly basis?

The fact that the Kings didn't fuck up this pick is reason enough to be excited as a Kings fan. Especially with Tyrese Haliburton also looking like a draft hit. Remember, the bar isn't exactly all that high for the Kings. They just need to show they are actually a competent team and not a complete dumpster fire. So far this year, they're doing just that.

If you were to ask me which one of these two will be able to sustain this early success, my vote has to be the Wolves. Their advanced metrics are much more encouraging. The Kings still have the 24th ranked defense and a negative overall net rating at -3.4 which is 22nd in the league. Their offense is only going to take them so far, and as we know in the West if you can't defend you things won't work out well for you. Just ask the Blazers, Mavs, Nuggets etc.

But look, things have been so bad for both of these teams and fans that I say let them enjoy this great start. Let them be hopeful that their playoff droughts might finally come to an end. At the very least the ability to compete in the play in. I think that's a realistic dream given what we've seen from both to start the year.