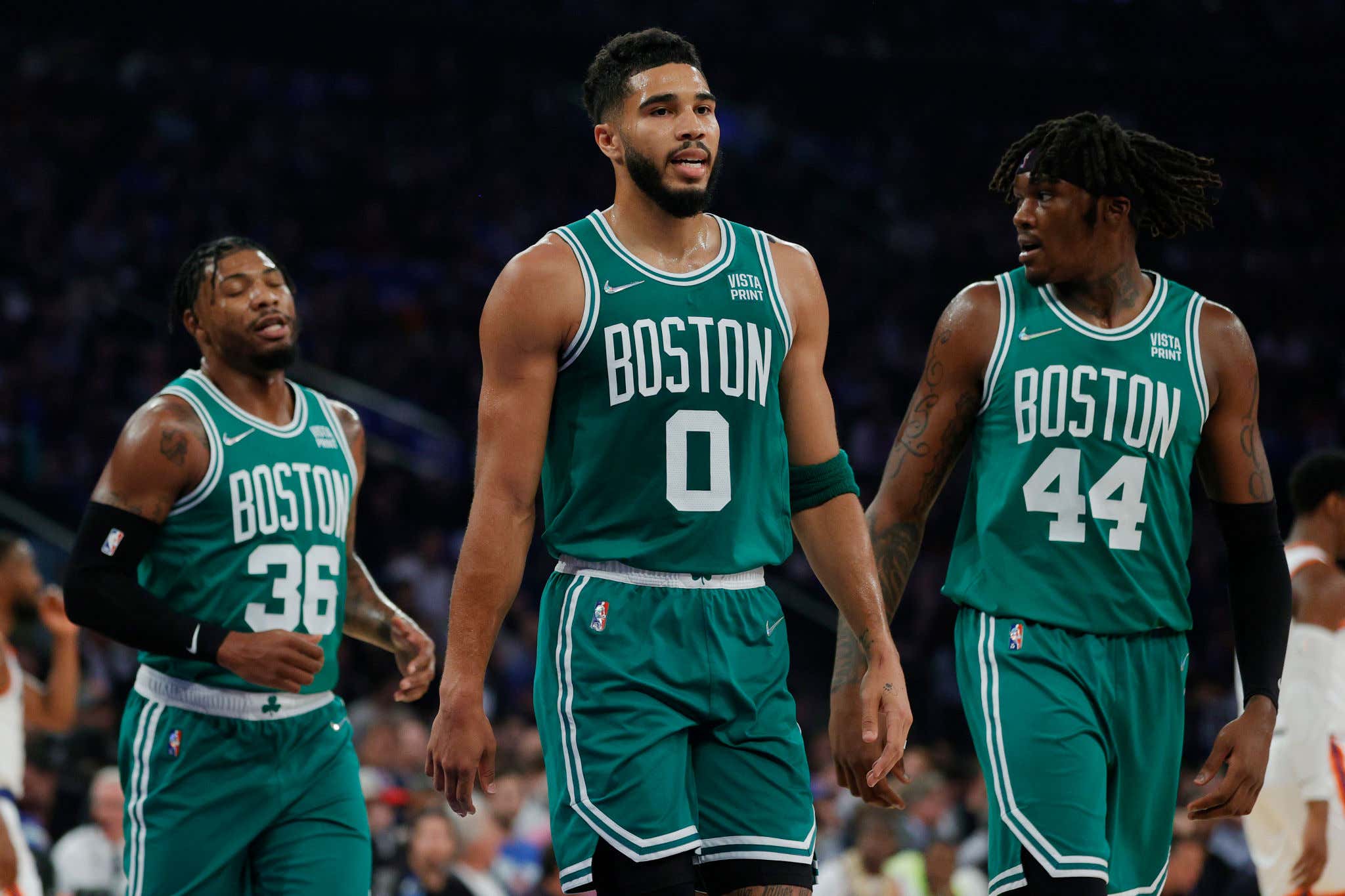 One of the early challenges for Ime Udoka is to figure out his rotations. That's pretty standard at this point of the season when you have a revamped roster and you're throwing a bunch of stuff out there to see what might stick moving forward. At times his lineup choices will be horrific and need to be changed immediately, and other times a certain combination will flash some potential and give him reason to use it for a larger sample. Add in the fact that the Celts have already dealt with some precautionary injury rest and covid protocols, we've been able to see a bunch of different combinations to start the year.

Let me stop you before you even start. We ALL know this is a small sample. They've played four (4) games. All I'm doing here is looking at what seems to be working and what is already showing warning signs of things Ime should avoid doing when it comes to his rotation based on what we know on October 27th. This could change as the year goes on, in fact I can guarantee it will, but I care about the now. So coming off that post, I wanted to look at all different combinations and see how they look. I'm talking 5 man lineups, 3 man pairings, 2 man pairings, on/off splits, the whole nine yards.

To start, let's first take a look at how the Celts rank so far on both ends of the floor in relation to the league

Not exactly blowing your socks off I would say. Definitely some room for improvement I think we can all agree. So what can we learn from Ime's lineup choices when it comes to how they impact those numbers? Let's have a look.

So far, the most used lineup we've seen the Celts use to start the year has been

This group has played a total of 39 minutes together, more than double the next used group. There are things I initially loved and hated about this group when we first saw it. I like Rob as the one big, and this group does have legit passers at every position which is why it should be no surprise they have an AST% of 64.7%. That's great. At the same time, I think we were all worried about the lack of shooting this lineup gives you around the Jays. I wouldn't exactly call Smart/Schroder/Rob lights out shooters. Here's where it gets interesting though. Look at how they've been doing so far

That's legit. The offensive numbers are what really stood out to me. They have a total of 22 assists and 8 TOs together and are a +16 in those minutes. The shooting is a little suspect, just 43/32% so far, and we've seen Ime use this lineup for about 13 minutes a night. As weird as it might look at times with a Schroder/Smart pairing, for the most part this lineup has worked out. Given Schroder's willingness as a passer, it does feel like Ime has made it clear that when guys are out, Schroder is getting the nod in the starting lineup.

Let's say Ime needs to find a lock down defensive unit over the course of a game. Where should he look? How about the normal starting lineup. The combo of

has one of the best Drtg's on the team at just 89.5. They are giving up just 90 points per 100 possessions and are holding opponents to just 33% shooting. Considering we need to see the starting group get back to playing legit defense, those numbers are encouraging. Here's what might surprise you though given what we saw last year. The defense has gotten even better when you swap Grant in for Rob. That group in their limited sample has a 75 Drtg. This is shocking because it tells us that Grant's defense has been so much better to start the year. Add that to his improved shooting and you can understand why Ime spot starts/has Grant as the first big off the bench.

In terms of 5 man units that haven't looked all that great. The easy answer here is the all bench lineup we saw.

played just 3 minutes and woah man was it brutal. A 220 Drtg and -120 net rating. There's a reason Ime pulled the plug on that shit almost immediately. He threw it out there, got a look and said no fucking thank you. I think the lesson here is things have to be staggered when it comes to the starters until proven otherwise.

Next I wanted to see when it comes to Tatum/Brown, who works best with them so far. As we know, Brad and Ime have made it clear that maximizing the Jays is the number one priority of this team. The numbers are interesting to start the season. When it comes to a trio where the third guy is a guard, here's how it shakes out with Smart/Schroder

Both have proven to be legit options so far, but you can understand why Ime is having Schroder on the floor to close games. I think we're at the point where we see this even when guys are healthy. We saw above that both of them included in the 5 man lineup works, and either guy is showing to be effective playing next to the Jays. So far, I'd say the Smart/Schroder situation is living up to what we hoped.

Quickly, for all the noise you hear that Jaylen/Tatum can't play together, they've shared the floor for 77 minutes this season and have a 120 Ortg/93 Drtg/+27 net rating. Sadly, this completely contradicts the internet's favorite narrative. Who could have possibly seen that coming. Oh that's right, everyone with a brain.

How about the double bigs? Defensively, Rob/Al next to each other has been nails with an 80 Drtg. The offense is a little rough at 96, but when they are on the floor together it's usually with scorers so I'm not too worried about that. I'm just encouraged by what I see defensively and on the glass. Everything we've seen from this pairing is that it is NOT a Thompson/Theis double big situation. Plus, any concerns that this approach would lead to Kanter minutes has proven to be a non factor since Ime has shortened his rotation.

So while there have been plenty of examples of lineups that work, there are still things that freak me out a little bit. Most notably, Tatum's on/off situation. The second he steps off the floor, the team's offense tanks to just a 93 Ortg. Their defense skyrockets to a 116 Drtg giving them a -23.0 net rating when Tatum is off the floor. This….is a problem. He can't play 48 minutes, and if we want to talk about this supposed improved depth, the Celts have to find a way to not completely shit the bed the second Tatum comes out. The Hornets game was a great example. Down 5 in the fourth when he came out with 9 minutes, suddenly they were down 11 just 2 minutes later. That's all too familiar of the 2020 Celts for my liking.

We see a similar trend with Rob as well. The second he steps off the floor the offense tanks to a 94 rating, the defense shoots up to 116 and the net rating is a brutal -21.1. Their rebounding drops as well. This is concerning because we're already seeing Rob play the most minutes he ever has in a season. On one hand I want Ime to be cautious of this, but on the other hand Rob is proving to be such an important part of what they do, I'm not sure they can afford to be cautious with him.

For all the Smart haters out there, allow me to showcase his value. The offense dips slightly when he's off the floor (104 to 100), but the defense takes a big time hit skyrocketing up to a 126 rating. Overall the team has a -26 net rating when Smart is off the foor. We just saw what his defense can do when it comes to winning you a game. It's why Ime should continue to love and trust him in end of game situations. The defense has a much bigger drop when Smart is off the floor compared to Schroder as well (114 rating).

So, what does this all tell us? For me, the signs are clearly telling Ime that it's OK to throw out a Smart/Schroder lineup, especially in crunch time. Nothing we've seen suggests it has to be one or the other just yet. For a team that desperately needs to get back into becoming an elite defense, the double bigs might be the path. We also see that despite all the hype around the depth, shit is still a big time issue whenever Tatum leaves the floor.

It'll be interesting to see how things change over the course of the year and we get a larger sample, but we're starting to see what type of options Ime can run if he wants this team to be successful. Whether he sticks to it or not is anyone's guess.