Look, I'm not going to sit here and make comparisons between Mac Jones and the legend he was brought to New England to replace. Just because they made surreally identical completions on perfectly thrown bombs on the same day. This Twitter account used the work GOAT, not me. I would never cheapen Tom Brady's legacy with the comparison. I won't even point out that Brady's throw was to Mike Evans while being protected by Pro Football Focus' 3rd best pass blocking line, while Jones' was to Kendrick Bourne from behind PFF's 18th best.

In fact, for the purposes of this discussion, I won't even bring up Tom Brady's first seven career starts:

… and how they compare unfavorably to Mac Jones' first seven career starts:

Or mention that Brady's performances were in his second season, with a full year in the Patriots system under his football pants belt while Jones has been thrown right into the breach. That would be disingenuous.  After all, 2001 was a long time ago. The NFL has changed. Quarterbacks have evolved. It's much easier for a first time starter to come in and just throw up 100+ passer rating games. So just because Jones has twice as many as Brady did at similar moments in their development means jack squat.

In fact, let's not even mention the eerie similarities:

On the other hand, Jones can be compared to the rest of the quarterbacks in the league today. In particular, the others in the Class of 2021. The other five who've made starts have total of three 100+ games combined. The first two picks of the draft, Trevor Lawrence and Zach Wilson, have zero. Sticking with PFF for a second, among that group, Davis Mills is the only other rookie with a game graded above 80.0 (against the Patriots, no less). Jones is at 82.5 on the season.

But comparing him to his fellow rookies is too easy. Like Chazz Reinhold scoring at a funeral:

After all, he leads all rookies in:

So what else is there? Other than the things you can't quantify. Like leadership:

So instead, let's see how Jones stacks up against his real peers, the top quarterbacks in football. The one in whose mighty company he will soon find himself. Because the facts are, he's been good. And he's getting better. From Evan Lazar at CLNS Media: 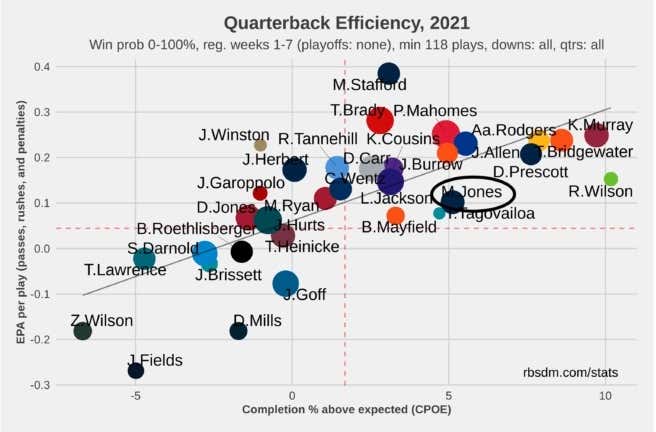 Mac is the seventh-most accurate quarterback in the league through Week 7 (also look at where all the other rookies are in the chart).

The Patriots’ rookie is also as-advertised in his college evaluation as a processor, getting the football out quickly and decisively, with an average time to throw that ranks seventh among starting QBs (2.55s). …

Plus, Jones’s aggressiveness is improving in recent weeks. Over the last two games, 15.8% of Mac’s pass attempts are 20-plus air yards downfield. In the first five games, it was ten percent.

At the risk of putting an analytics hat on a hat here, Next Gen Stats uses a metric that determines completion percentage above expectation. And by that measurement, Jones is 7th best in the league. But just going by good old reliable middle school math, putting his completions above his attempts, next to X over 100, cross multiplying and dividing, Jones' completion percentage is fourth in the entire league, at 70.4.

And as a reminder, this is all coming from a dad-bodded, weak-armed, "peashooter" system quarterback who was surrounded by talent in school and fell in the draft because he's not athletic enough to withstand the rigors of the modern NFL and will probably sit for a year behind Cam Newton. Now imagine how good he's going to get once he figures out what he's doing and gets into shape. You know, the way Tom Brady did.