ET Canada - When Megan Thee Stallion has places to be, standing around to chat just isn’t possible.

On Sunday, the “WAP” rapper attended the Formula 1 U.S. Grand Prix, where she was approached by Sky News reporter and former racer Martin Brundle for an interview.

But things immediately got awkward as a member of Megan’s entourage tried to shoo the journalist away.

But Megan waved her escort away to talk momentarily to Brundle, who made things more awkward by asking the rapper if she could freestyle a rap about Formula 1 racing.

“I have no rap today, I’m sorry,” Megan laughed. As she walked away, Brundle attempted to ask who she was supporting in the race.

“She seemed very happy to talk, didn’t she,” Brundle commented. “That’s very nice of her, and I appreciate that.”

I feel bad for Thee Stallion here. I know many will disagree with me because asshole celebrities are always in the wrong, and easy targets to hate, but hear me out.

She's a nice young woman, still climbing the rungs of the ladder of stardom. What in the fuck she was doing being the celebrity host of the Formula 1 U.S. Grand Prix in Austin I haven't a clue. But somebody, that sits in a nice corner office somewhere, who wears blue buttoned-down shirts with a white-collar like Bob Kraft, and has their coffee delivered to them thought this was a good idea so they contracted her.

(I know we're all in the circle of trust here, so if we're being completely honest, I bet he caught a hard case of the feels after watching her work)

And lucky for the mystery man she dressed the part.

But let's talk about that bloke Martin Brundle getting absolutely facialed here on live television shall we?

Martin was none too pleased.

I know Martin clapped back with a quick, "I can because I just did" but the damage was done. Thee Stallion's people treated him like a peasant, not worthy of decency, and a quick brush off. Even though the man held a microphone in his hand, and had a press credential clearly hanging around his neck.

Look at this smug prick.

That's the face of a guy who put in countless years climbing the "intern" ladder at record label after record label. With dreams of one day becoming Paul Rosenberg. He ate shit from thousands of suits, artists, booking agents, managers, and posse alike. You'd think somebody that was used to being a doormat and treated like he was an inferior for years would flip the script once he was in a position with a smidget of power.

Remember in elementary school science class when they broke down the precipitation cycle for us? Precipitation forms in the clouds when water vapor condenses into bigger and bigger droplets of water. When the drops are heavy enough, they fall to the Earth. Those drops eventually find their way into streams and runoff which eventually finds its way to lakes and oceans and the whole thing repeats itself on a perpetual cycle.

Well, that's PR jagoffs in a nutshell too.

Nobody likes making generalities, and of course, nobody deserves to be painted with a wide brush across the board.

But for the most part, PR, AR, all these acronym big-boy titles that sound important but really aren't are all the same. A bunch of gophers, in slightly better clothes driving slightly better cars, finding ways to make themselves useful and important. All so that they can justify their employment. Like, "see, you need me!" 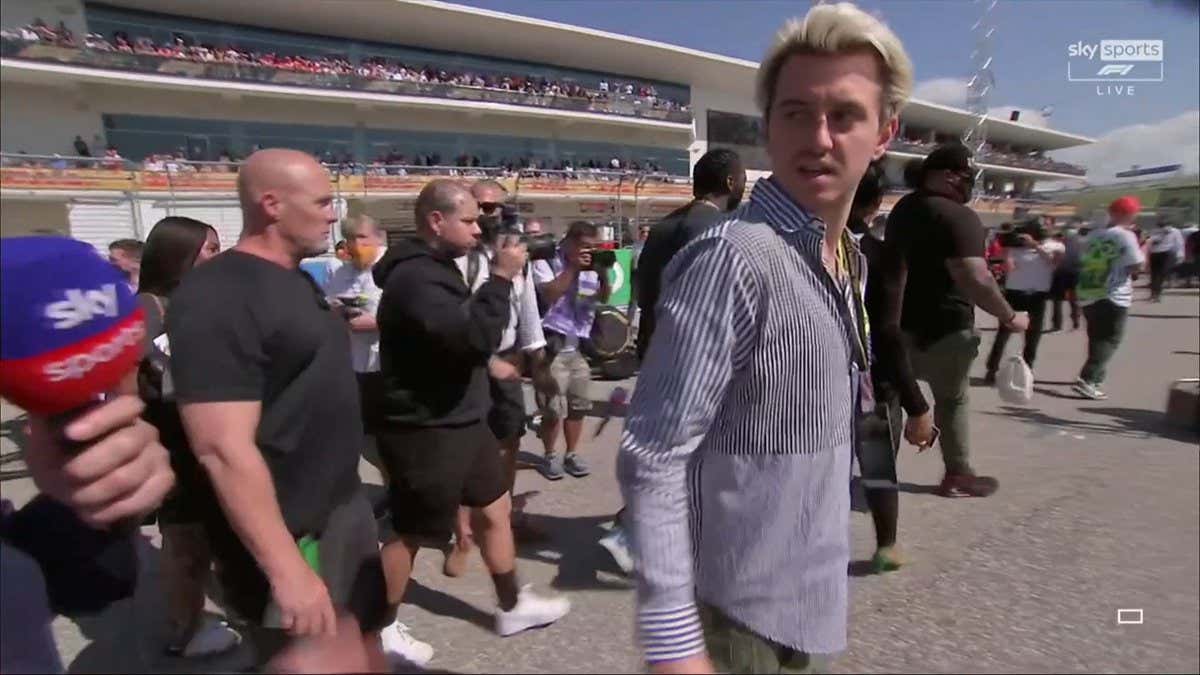 wore this altercation like a badge of honor. Waiting for just the right time afterward to proudly proclaim, "Don't worry Megan. I've always got your back."

The best part is this will in now trip Martin Brundle up. Guy lives for awkwardness.

p.s. - since this is Barstool SPORTS, I'd be bad at my job to omit how the race actually went and who won.

First off, if you haven't caught the F1 fever yet, what the fuck are you waiting for?

By far the best thing the Europeans have introduced us to besides their food, their women, their wine, their cars, their clothes, and that about sums it up.

The turnout in Austin was insane.

It was neck and neck between that little bastard Max Verstappen and Lewis Hamilton, who both just so happen to be vying for the top spot in the points column. So the race meant a ton with only 6 left in the season.

Verstappen ended up fending off Hamilton and securing the victory.

For awesome up to date news on the sport follow Logan on twitter. And for a real recap of the race, read his blog.