Source - Here's a firm lesson that alligators are NOT the slowpokes they're often made out to be -- especially when they're in their liquid turf ... these bastards are fast and furious!

Check out this wild video of a guy who was swimming in a lake down in Campo Grande, Brazil over the weekend, when he had a freaky run-in with the apex predator that was on his ass as he was trying to swim to shore.

It seems the man had no idea he was being scoped out by the gator -- but once he did realize he had company ... he tried to book it.

Is this real? I'm hesitant to write about animal attacks because I have a history of falling for fake ones but I'm pretty sure this actually happened, right? Like, alligators can swim fast enough to create a wake? I think? The photo of the bite looked looked legit too... 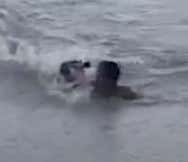 Regardless, this guy is the luckiest man on earth. He's also one of the dumbest humans alive for swimming in a body of water that is known to contain alligators. I mean has he never seen NatGeo? Does he not know how these things hunt? He's lucky it didn't creep up on him and drag his ass to the bottom of the lake. Apparently the gator pierced the skin and the guy was bleeding when he left the water, which is exactly what he deserves. I hope it leaves a scar too so every time he goes to take a dip he thinks twice. Moron. Also, that gator has to drown itself now. Imagine how embarrassed he's gonna be when he buddies find out he couldn't take down a human? Yikes. In all seriousness thank God that guys okay. He was one chomp away from disaster. Now here are a bunch alligator attack highlights. Enjoy.