Don't let the Catholic Church get hot right before the holiday season! During these divisive times, it's nice seeing people of all shapes, colors, and by the looks of it jobs unite together in their place of worship, even if it's to carry out a fucking lunatic by his arms after he started yelling at their priest. Usually you have to be dead in a pine box to get that sort of ride out of a Catholic Church. But homeboy here got to experience it with life still in his eyes before getting Jazzy Jeff'd the fuck outta there in what had to be the most exhilarating end to a service in the history of church. 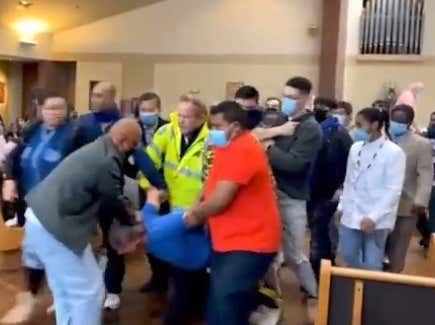 With Christmas approaching, I'm putting the guy in the brown jacket on the Nice List barring any mortal sins over the next two months for confronting this mamaluke because the altar should be treated as one of the No Fly Zones unless you've been invited up by the priest. I'm also giving the guys in the beige jacket and white pants Nice List status for running to the altar like the Ultimate Warrior once shit got real.

However, the real MVPs in all this was pink shirt and the 2nd string priest for holding up the altar once it got physical. I don't know if knocking over the altar is a sin, but at the very least it's an eternity of bad juju for the church and everyone in it. Which is why I'd slip pink shirt at the very least an extra communion wafer for the rest of his life and at most a Get Out Of Hell Free card for helping out while bumping the wingman priest up to head honcho for least Christmas Eve Mass if not Christmas Day as well. 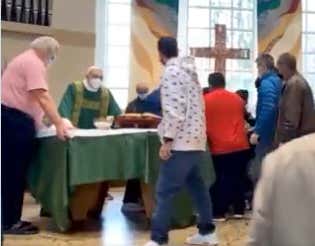 Also I know the Altar Boys are kids, but what exactly was their plan here? Hoping they could pray away the guy in the blue shirt from absolutely bundling the Father? I'm not saying they have to be the enforcers of Church but they should at least act as the last line of defense if a crazy person makes it through the onto the most holy place in the building.