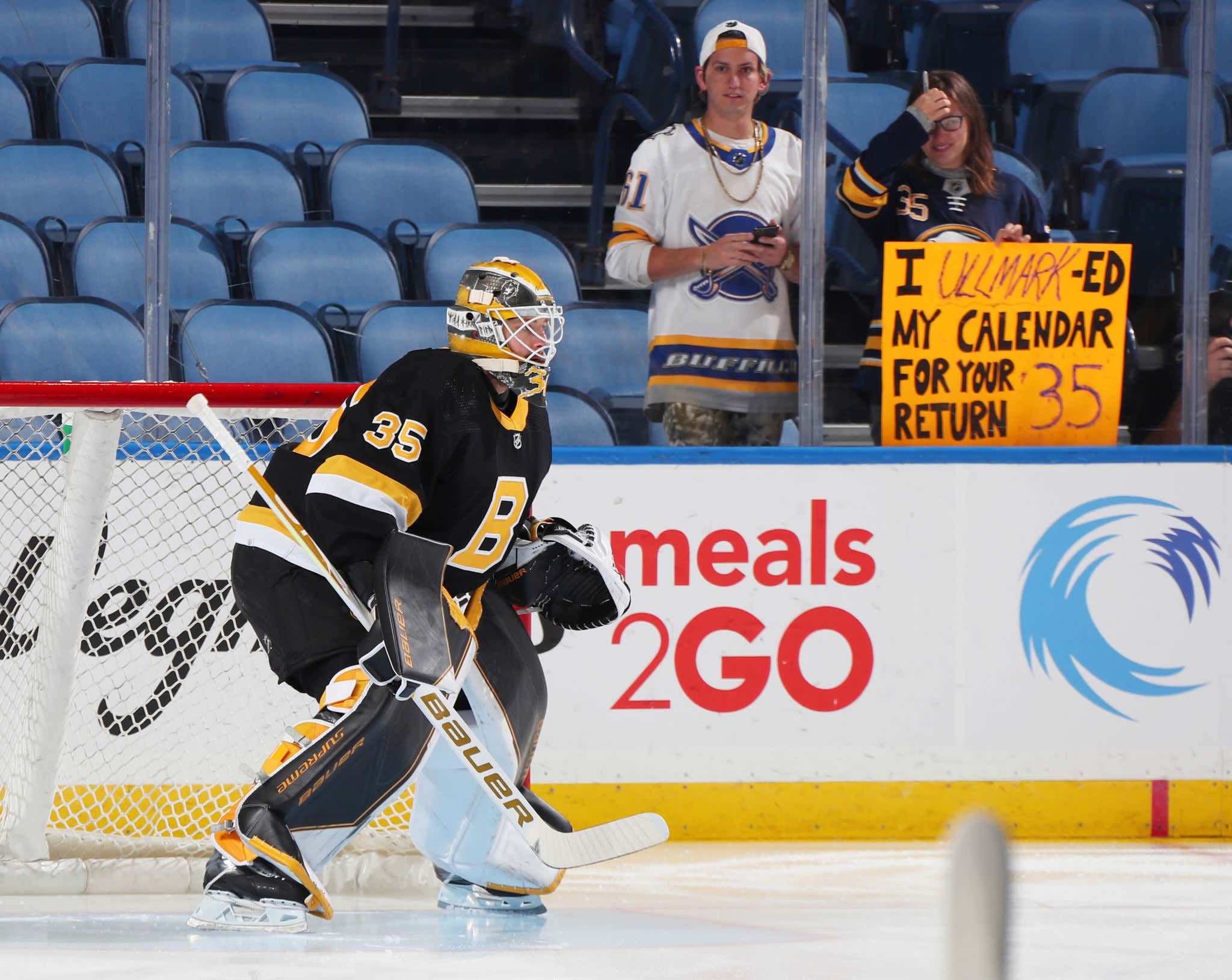 Linus Ullmark backstopped the B's by making 34 saves against his former team to earn his first win as a Bruin.

David Pastrnak opened the scoring in Buffalo early in the 1st. Marchand got away with a cross check on Dahlin who coughed up the puck. 1-0 Bruins.

Despite getting outshot, the B's would tack on another goal before the end of the period. Tomas Nosek with his 1st goal as a Bruin made it 2-0 by finishing a nice feed from Coyle and Hall. 2-0 Bruins.

Former Sabre Linus Ullmark made 15!!! saves in the 1st to keep the B's up. None better than this.

Early in the 2nd Charlie Coyle extended the Bruins' lead on the PP (Dahlin in the box for hooking Pastrnak). Sliiiick feed from Brad Marchand. 3-0 Bruins.

Taylor Hall (who got boo'd all night) finished off the Sabres with an ENG. 4-1 Bruins.

- With Nick Foligno (day to day, upper body) out of the line up Anton Blidh made his season debut at 4LW. Tomas Nosek slotted in Foligno's spot, but played the majority of tonight's game with Hall and Coyle. Frederic centered the 4th line, by far his best game of the year.  John Moore replaced Connor Clifton on the 3rd pairing.

- Anton Blidh suffered an upper body injury and did not finish the game.

- David Pastrnak opened the scoring with his first of the year. Pastrnak is second only to Marchand for most game opening goals with 47 in his career (Marchand has 49).

- Brad Marchand with 2 apples tonight. Set up Pasta's first of the year and had a sick feed to Coyle on the PP. Laid out Rasmus Dahlin. Just did it all tonight. Animal. Loved this clip from the postgame interview with Buccigross…

- Said it last game but Tomas Nosek has been noticeable all year, nice to see him rewarded tonight. Was moved up to play with Hall and and Coyle. His linemate Charlie Coyle with a big 3 point night (1G, 2A).

- Craig Smith took a maintenance day on Thursday and didn't look right tonight. Not sure what's nagging him but a tough night for the third line.

- Linus Ullmark made his first start in net for the B's tonight. His best game in a Bruins uniform (since we've seen him in preseason). Made 15 saves in the 1st period alone. Rock solid. We'll see who gets the net going forward. Ullmark finished the night with 34 saves on 35 shots.

- Tonight's game was broadcasted exclusively on ESPN+/Hulu. I get ESPN wants everyone to sign up for ESPN+, and it is worth the money IMO (NHL tv is no longer), but I also understand the frustrations of people not being able to get it locally on cable. My feed had the occasionally buffer, and having to pay for cable on top of a subscription so you don't miss a game stinks and definitely irks fans. Had to explain to my parents where/how to log in so they didn't miss it, I'm sure other people weren't so lucky. I think ESPN taking over NHL rights is huge for the sport, but hey, it's not gonna be perfect… just my 2 cents.

Unlike in Philadelphia, the B's actually buried their chances tonight. Great bounce back win. Back in the win column.

B's are back at it on Sunday for a matinee against the 4-0 San Jose Sharks.