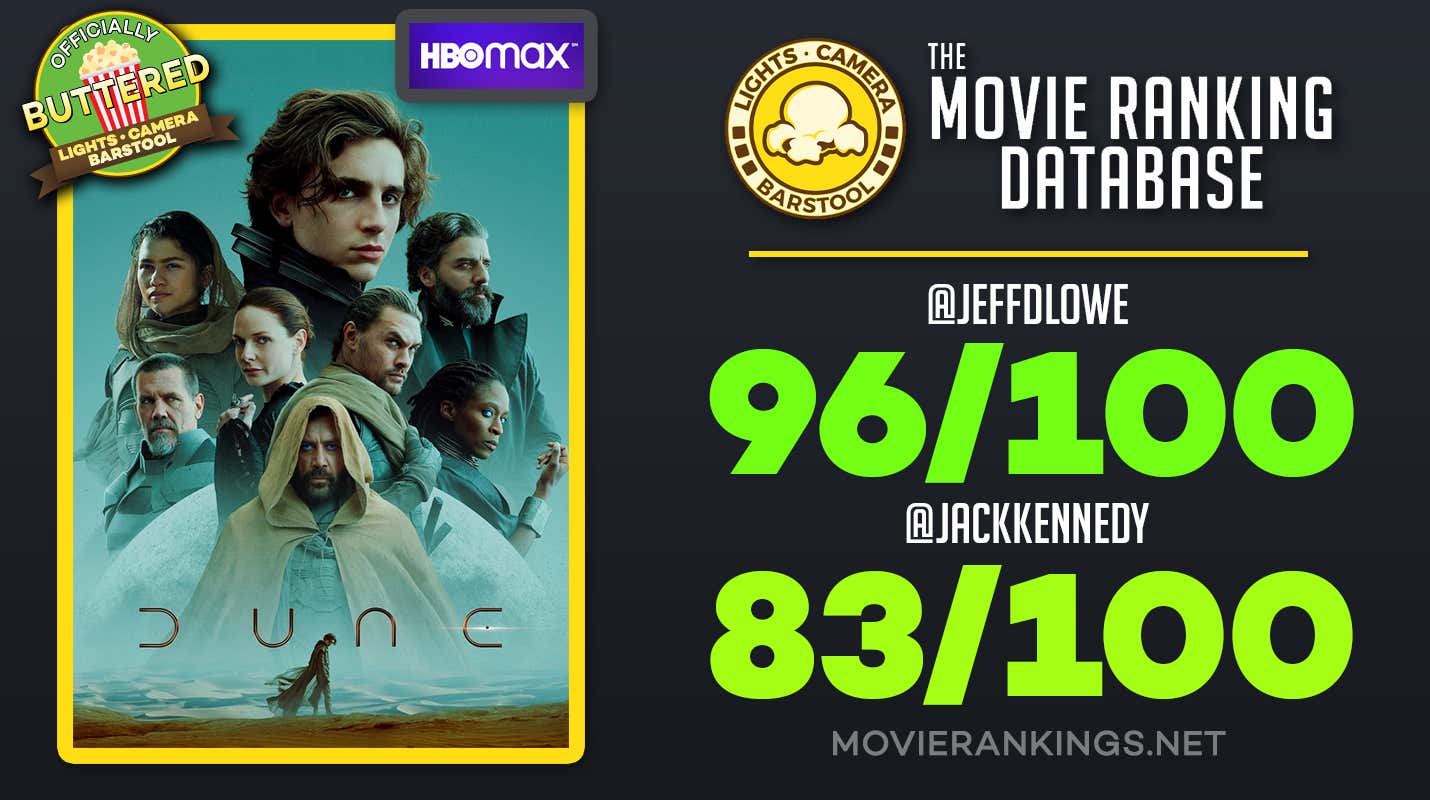 'Dune' is finally fucking here and my word…

Paul Atreides, a brilliant and gifted young man born into a great destiny beyond his understanding, must travel to the most dangerous planet in the universe to ensure the future of his family and his people. As malevolent forces explode into conflict over the planet's exclusive supply of the most precious resource in existence-a commodity capable of unlocking humanity's greatest potential-only those who can conquer their fear will survive. (via MovieRankings.net)

JeffDLowe (96/100): A task as tall as any, Denis Villeneuve, possibly the best director in Hollywood right now, has seemingly done the impossible, adapting 'Dune' into an epic of a film and visual masterpiece, all on the grandest of cinematic scales. While only a part one (if Warner Bros. ever allows him to make a part two), 'Dune' still manages to put forth a captivating story with superb acting and incredible world-building.

- Seriously, this is one of the best looking movies I have ever seen in my life
-- The scale, scope, size, and vividness of this space epic will leave you in awe
-- It might be the greatest marvel I have ever seen on an IMAX screen
- In terms of acting, I was quite pleased with Timothée Chalamet
-- He is a great actor, but this type of role and movie was a whole different animal
-- This movie will solidify him as the budding star people describe him to be
- Everyone else was great and added so much flavor to their characters
-- Isaac, Ferguson, Mamoa, Brolin (my guy, he is so awesome), Skarsgård, and more
- The pacing is fucking insane for a two and a half hour movie
-- I love 'Blade Runner 2049', but it was a more deliberate slow burn
-- That didn't feel to be the case with 'Dune' for me at all
-- Some slower moments? Sure, but this movie fucking flies by…
- Hans Zimmer, as expected, delivers a score that punches through in every scene
- I did NOT read the book beforehand but had no real issue with the lore and backstory
-- It might be worth reading up before the movie, but I don't find it necessary

KenJac (83/100): As someone who never read the book, everything that I know about ‘Dune’ going into this movie was from the David Lynch adaptation. What I gathered from that is that the source material must be both very dense and very rich. I think this adaptation definitely capitalized on the richness but fell victim to that density.

On the acting side, it’s tough to single out a single performance as being the best. Mostly because I feel this movie is so much more focused on the overarching story and the journey of the ensemble vs the individual which is both a good and a bad thing. It’s good because it almost reminds me of Lord of the Rings in that sense. I love having the chance to focus on the story and the world being built, and it makes me feel like I’m reading the book! However, the difference here is that each member of this ensemble casts a WAY larger shadow in Hollywood than anyone involved in Lord of the Rings did. That builds a sense of expectation for each character because we’ve mostly all seen the heights each actor can get to.

On the technical side, this is a gorgeous movie that uses the tech that was unavailable to David Lynch to realize the scope of the story. MASSIVE landscapes, incredible-looking ships/weapons/costumes, and a well-paced storyline that gets you hyped up for the next movie. The Hans Zimmer score only makes what was already great and makes it better, too. It’s mostly what I expected from Denis because it was what he had shown us before in ‘Arrival’ and ‘Blade Runner 2049’.

I honestly think that the only thing that hampers this movie is just the pure density of the source material. There are a lot of big words, backstory, and characters they get acquainted with, and I don’t think the movie does a good enough job of dumbing it down for the layman. There is probably an ideal balance of making a sci-fi/fantasy adaptation palatable to regular people while staying loyal to the source material, but I don’t think this movie found it.

Regardless, this is a sci-fi spectacle that you should be watching on the biggest and best screen possible. I promise you that watching it at home, regardless of how great your home setup is, pales in comparison to the IMAX experience. Watching at home is like blending up a fillet mignon and drinking it through a straw. Don’t do it!

--
The movie is Officially Buttered and is a must-see for anyone who appreciates fucking insanity in movie theaters. See it in theaters, especially IMAX! Go to the movies! Have fun! You can head to Lights Camera Barstool right here to listen to our latest episode where we will discuss the movie in full on our next episode.