With all due respect to the wonderful @BarstoolSports Twitter account, the Knicks are tied for the best record in the NBA after beating a rival city's team on Opening Night in a double overtime game that can conservatively be called patently absurd.

So I'm more than fine with the hooting, hollering, occasional expletive-filled slander of New York rival athletes, and dances out of Fortnite while people in gorilla masks watch on during a casual Wednesday night. 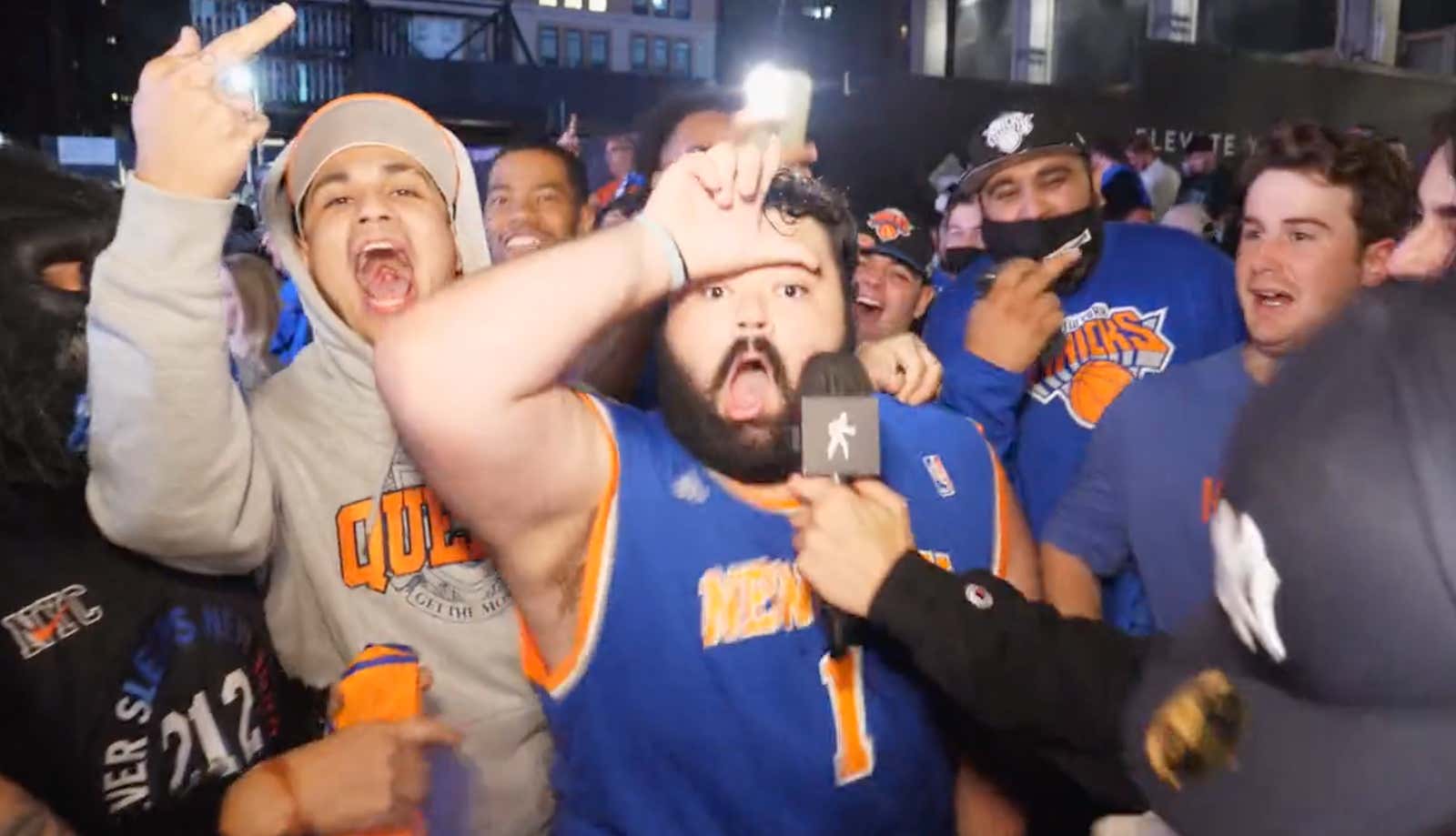 If a bunch of mad lads across the pond pulled this shit after the first match of the EPL season, we would say how much we love those blokes because footy is just different over there in England, just like hoops are different in New York. As one of the Olds that actually remembers the last time it happened, I can confirm that there is nothing that brings out the craziness of this fucked up city more than a good Knicks team since it's the one time the locals aren't engaged in a Yankees/Mets, Giants/Jets, or Rangers/Islanders Civil War. Yeah yeah yeahhhh, I know that the Nets are technically a New York team, but you can't compare them to their fanbase to the hordes of sick bastard Knicks fans that have somehow stuck with their team through the thinnest of thick and the thickest of thin. When you get a bunch of win-starved lunatics get even a taste of success, one thing happens:

When Knicks fans started doing this last year after they reached .500 in February, I was a mix of happy and embarrassed since it was great seeing people in orange and blue actually celebrating something while also acknowledging how ridiculous it was seeing playoff level celebrations in the middle of the winter. However, now I’m at the point where I wish other fanbases acted like lunatics after more games. Who gives a shit? We’re all living and dying with whether or not total strangers win kids games anyway and if the last 18 months has taught us anything, it's that you should enjoy your time on this rock hurling around that giant ball of flaming gas for as long as you are on the ride, because it can all be over before you know it. Especially if you have known nothing but misery for God knows how long.

KFC said it best in his tweet that somehow went out 7 seconds before mine.

You better believe that Knicks fans are going to celebrate every single win like it's their last after being the butt of jokes for roughly two decades straight followed by being stuck in their overpriced, comically tiny apartments for a year in a city that was the epicenter for a global pandemic when nobody knew what the hell was going on once the team finally became good.

At our core, New Yorkers are assholes. Especially the Yankees fans. But I fully recognize that the rest of us no great shakes either when things are actually going well. This godforsaken city and our teams have made us that way. Last season was when almost everyone was happy for Knicks fans being back. This season is when most of those people remember why they love watching us get gutted on national TV every year as they prop up everyone who beats the Knicks as the next Reggie Miller, which I'm totally cool with because it's just nice to feel something again.