I am traveling again this weekend with the good people of Hooters.

Spider and I were with the girls at Bristol last month... 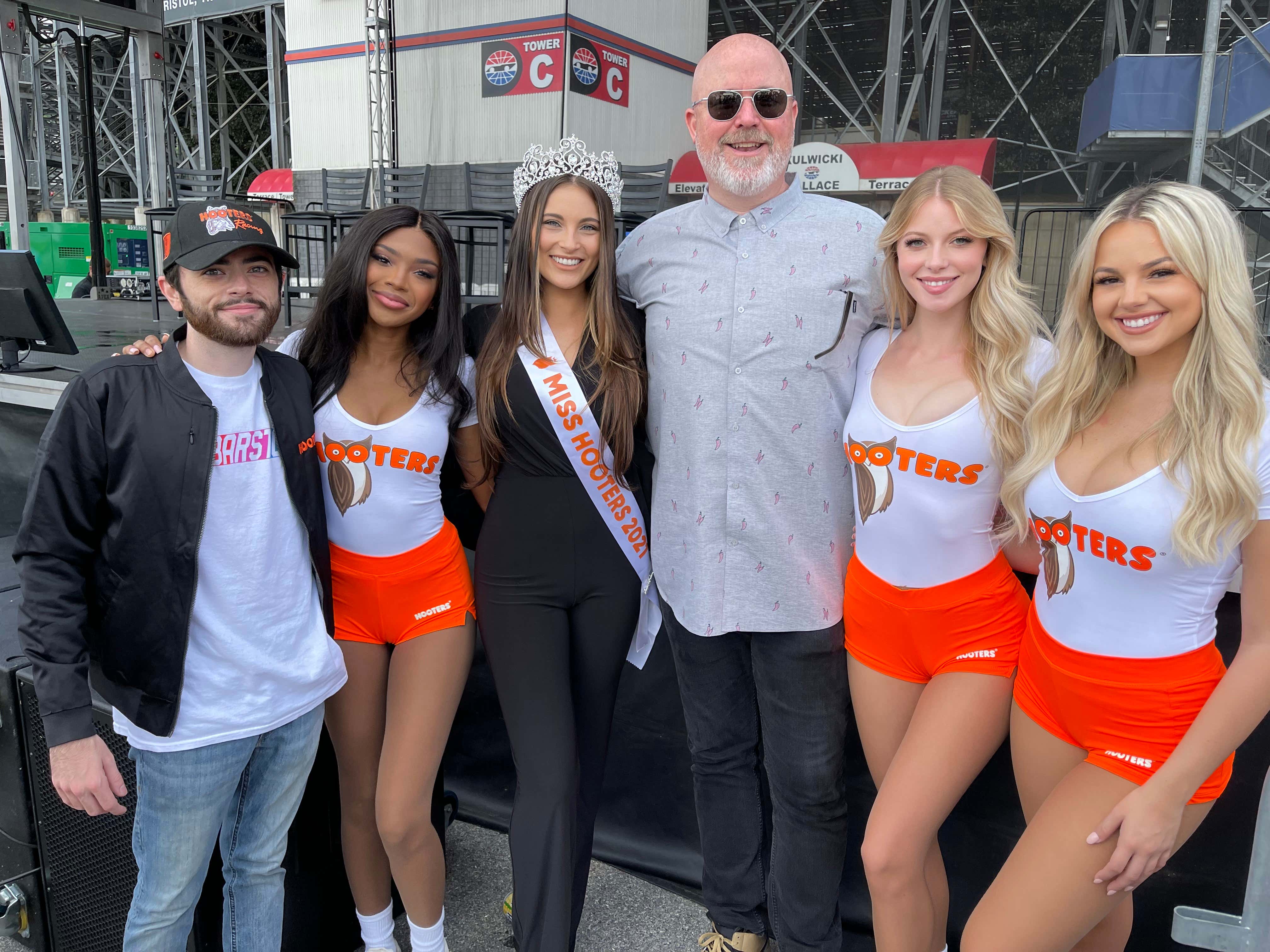 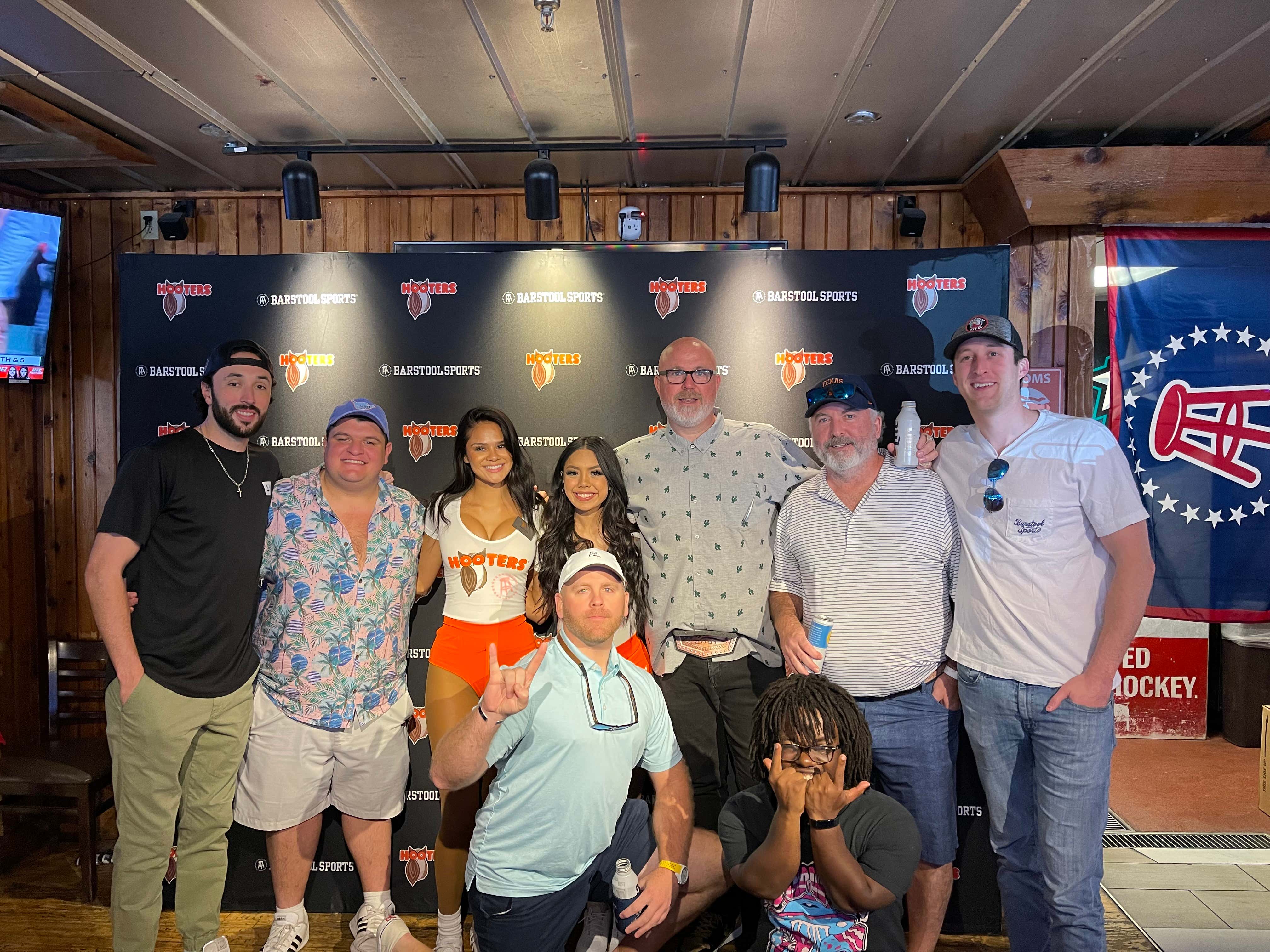 This week, I will be in Atlanta with an equally eclectic crew. 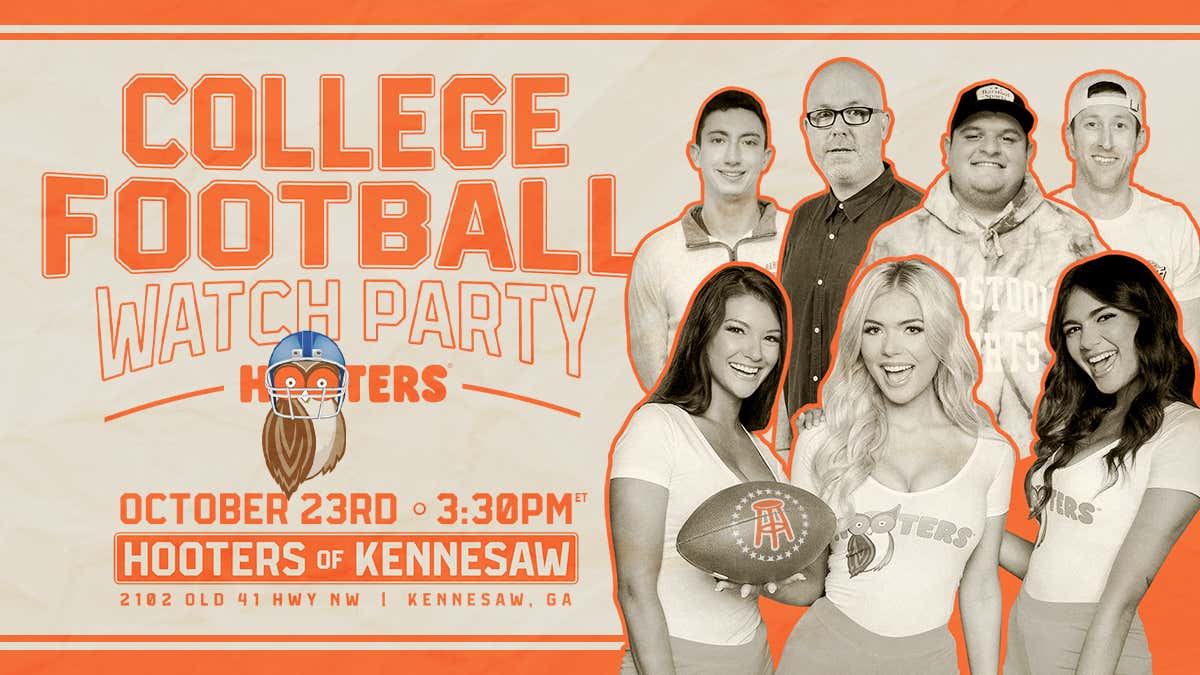 Glenny Balls, Tommy Smokes, Pat, and I will be at the Hooters of Kennesaw at 3:30 this Saturday to watch:

Now… Undoubtedly, there will be people who say, "What a weird crew." or "I would never show up to one of these." or "Big breasts are gross." (probably referring to mine and Glenny's), but here's the thing- Nobody cares.

Hooters simply wants to get the point across that you can have a great time watching the game without having to actually go to the game, so they gave me a couple a grand to buy drinks and wings for whoever does want to swing by for a couple of pops surrounded by scantily clad waitresses.

Not everyone's cup of tea, but, as I said before, we don't expect everyone to come.

When I heard that I was traveling with these other 3 gents, my mind went immediately to the question:

Which one of us would survive longest in prison?

In what order would we inevitably be killed in a Southern jail?

Tough hypothetical to answer without any reference points, so I am about to make some up…

Tommy, Glenny, Paddy, and I all show up at the airport Friday, and we are forced to check our carry-ons at the gate because the plane is overbooked and the overheads are full… Even in First Class (where only I am seated).

However, unbeknownst to us, our checked bags are being used by a dastardly group of shady baggage handlers/drug dealers as mules to shuttle bricks of cocaine between New York and Atlanta.

So… As soon as the bags leave our hands, they are stuffed with POUNDS (or kilos) of marching powder that will be unloaded by cooperative handlers on the other end.  The cocaine would be removed, our shit would be sent to Baggage Claim Carousel D (for drugs) at Atlanta Hartsfield Airport, and we would all be none the wiser.

However, a Georgia policewoman with high aspirations and strong ties to the streets hears about the shipment from one of her informants, so she is waiting on the tarmac when our bags (filled with drugs) touch down in the city she had sworn to protect.

We are taken into custody immediately where we are all subjected to extensive body cavity exams… Two of us kinda enjoy it (I won't say which two).

Obviously, we loudly argue our case that we were part of an elaborate setup involving airport employees, but the fact that smaller bags of coke were found in two of our colons (again, I won't say which 2) speaks louder towards our guilt, so we are thrown in Georgia State Prison in Reidsville, Georgia to await trial.

So to sum up…  Glenny Balls, Tommy Smokes, The Artist Formerly Known as Gay Pat, and a 49-year-old guy named 'Large' are tossed into the general population of a prison that, despite a published capacity of 1530, houses approximately 1900 of the state's most hardened criminals.

--- SIDE NOTE: At one point, as the four of us are being marched to our cells, I mention that Martin Luther King Jr was also once an inmate at Georgia State Prison after being arrested at a sit-in on October 19, 1960, but nobody seems to appreciate my knowledge of history. ---

That's the scene, and I ask again:

In what order will we inevitably be killed in Georgia State Prison?

I will tell you my guess…

Even though it pains me to say it, I think the first to go is me.

There was a time where I could kinda handle myself, but that window has long been shut.

I am a big guy, so I think I would arguably take any of the other 3 workmates in, say, a Rough n' Rowdy match, strictly on the fact that I would weigh them down in a similar way Fury weighed Wilder down just a few weeks ago.

But those matchups would be 1 on 1, and I don't think that's the way things work in prison.

Also, on the outside, I always carried a blade with me… Mainly to open Amazon packages, but still…

However, shivs are in short supply on the inside, which means I am essentially a defenseless manatee.

Therefore, I envision myself naked and slumped over in the far corner of the prison shower, bleeding out before the other 3 ever had a chance to say goodbye.

I am going out of order here because I feel strongly the member of THE HOOTERS FOUR who would last the longest is Pat. 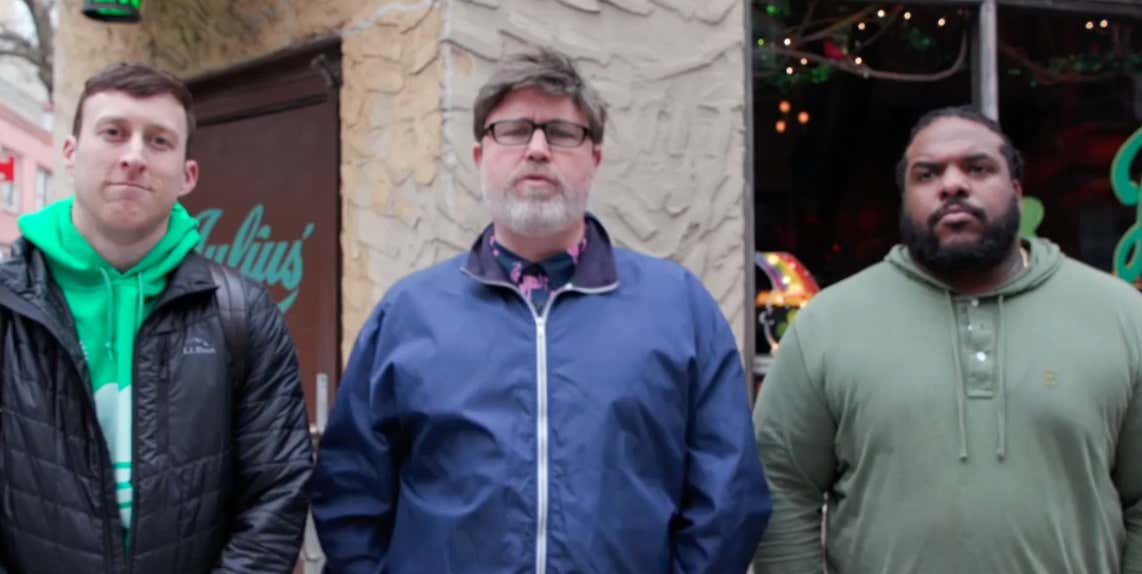 Pat is arguably in the best shape of the four of us (which isn't saying much) and I think (according to my grandparents) his deviant lifestyle may keep him out of heaven, but it also opens him up to see openings and angles other more traditional gents might not see nor be brave enough to explore.

Which leaves Smokes and Balls… Two TERRIBLE jail nicknames, now that I think about it.

From 30,000 feet, I think this choice is obvious… Tommy is more athletic than Glenny. A fact I can confirm after watching Smokes fly around on a football field for some branded content we were filming last week.

Outside of the physical, there's also a strong argument Tommy has the upper hand over Glen mentally.

Tommy did very well in the Survivor thing we did last year, and he and I have matched wits in some debate-related content for both Labatt's Blue (Barguments) AND with the Hard Factor boys (some debate thing they did last year).

However… Glenny has something Tommy does not have, and that is INSULATION. 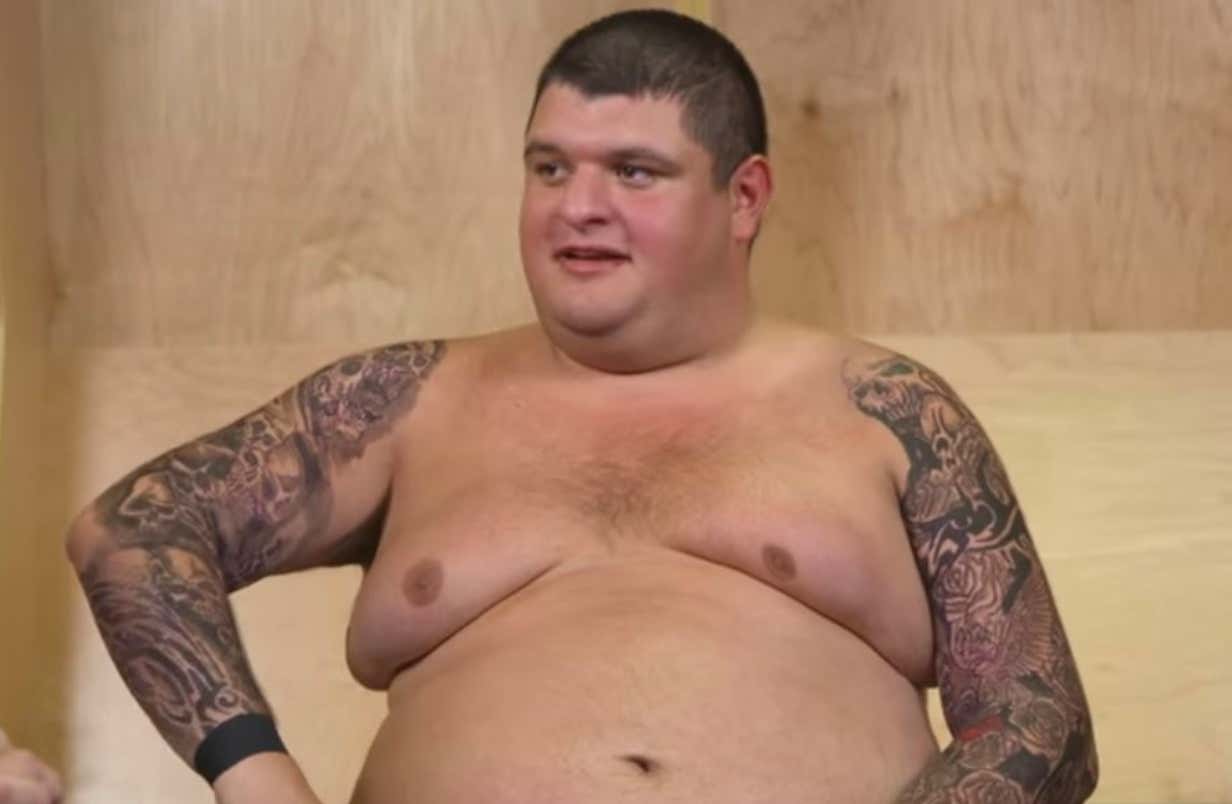 So any shiv pressed anywhere near Smoke's abdomen is bound to nick something vital.  Whereas Balls has some 'room for error' around his mid-section.

That coupled with Glen's surprising athleticism leads me to believe Smokes get it before Balls.

Therefore, in order, the deaths would be:

If you disagree, lemme know in the comments… Or, better yet, get your ass over to the Hooters in Kennesaw, Georgia on Saturday afternoon, and we can debate it over wings and booze.