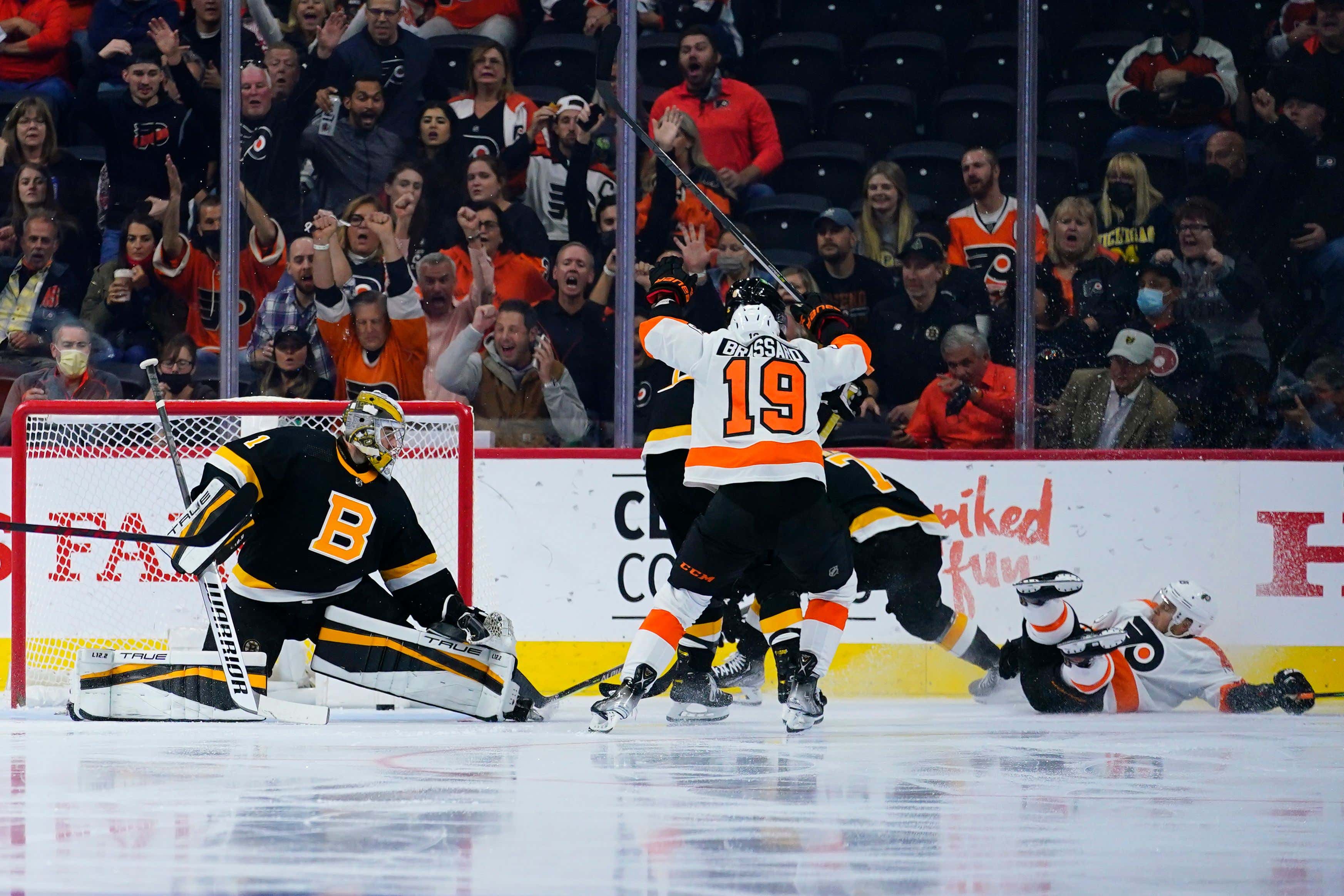 Despite throwing 40 SOG the Bruins walked out of Wells Fargo Center with a 6-3 loss to the Flyers thanks to some pretty horrid defense and tough goaltending. Let's get into it…

Despite sustained pressure by the Bruins in the Flyers zone for much of the early first period, it was Cam Atkinson who opened the scoring for the Flyers at 8:08. Stretch pass from Brassard lead to an odd man rush and Atkinson faked the pass over and buried it. 1-0 Flyers.

Late in the 1st the fourth line tied things up. Karson Kuhlman the beneficiary of a puck that was blocked not once but twice. 1-1. Great shift from the checking line who got in on the forecheck and went to work.

With less than 3 minutes to go in the period… and after getting stapled into the boards by Rasmus Ristolainen, Charlie Coyle got up and took a tripping penalty on Travis Sanheim.

Joel Farabee cleaned up a PPG off a Ryan Ellis shot with just 8.9 seconds left in the first frame. Scramble in front and Swayman couldn't get his stick on it. The Flyers would take a 2-1 lead into the 1st intermission.

Keith Yandle with a long bank pass to the endboards, James van Riemsdyk beat out the icing fired a shot on goal and Scott Laughton beat Swayman five hole on the rebound. Flyers led 3-1 early in the 2nd.

Charlie McAvoy with a stretch pass to Taylor Hall who beat Martin Jones all alone. Bruins clawed back into the game. Filthy play. 3-2.

A key face off win led to Brad Marchand tying the game up late in the 2nd, Charlie McAvoy swung around put the puck on net, David Pastrnak followed suit and Brad Marchand cleaned up in front. 3-3.

Mike Reilly coughed up the puck breaking out of the zone and the Flyers went the other way, Cam Atkinson scoring his 2nd of the night. Just 58 seconds into the 3rd period. 4-3 Flyers.

Travis Konecny would add another Flyers goal to make it 5-3.

- We saw McAvoy and Grzeclyk reunite and Forbort pair with Clifton to open the game. The former looked really good offensively while the latter seemed to struggle in their own zone. The defense as a whole, completely let down the team tonight. Too many turnovers leading directly to goals. It's still early in the season, Forbort hasn't looked comfortable quite yet. Hopefully this was just a one off and they can figure it out going forward.

- Noticeable game for Tomas Nosek. Went in hard on the forecheck to help set up Karson Kuhlman's goal and was very active on the PK.

- Filthy pass from Charlie McAvoy to Taylor Hall (is a Boston Bruin) in the 2nd. Hall's first goal of the year. Pretty pretty play.

- Two games, three goals for Brad Marchand who is picking up where he left off from last year. Top line (+ 73+48) were all over the ice tonight. Just couldn't get any more offense despite the B's throwing 40 SOG.

- Nick Foligno left the game midway through the 2nd and did not return. The Bruins would announce he would not reuturn with an upper body injury.

- Jeremy Swayman got his second straight start in net. Wasn't his best showing. First time he's given up 3+ goals in a game. It was just his 12th ever NHL start. Not gonna harp on him too much, we'll see how he responds and go from there. Finished the night with 19 saves on 24 shots. We'll see Linus Ullmark start against his former team when the B's head to Buffalo on Friday night. Planned start. I'm sure Cassidy will evaluate from there who gets the net going forward.

Tough to get positive results when you're chasing the game all night.

Just wanted to shout out Biz and Anson Carter for their pregame talk about Jimmy Hayes and how his family opening up about his cause of death should and will help shine a light on other people who are struggling. Hopefully the publicity and honesty of Jimmy's untimely death will help save others.

The Bruins continue their road trip to Buffalo to take on the red hot Sabres (3-0) on Friday night.