(could they have used a more terrifying picture for this piece? Ay Madone it looks like the Independence Day ships firing but in real life.)

FT- China tested a nuclear-capable hypersonic missile in August that circled the globe before speeding towards its target, demonstrating an advanced space capability that caught US intelligence by surprise. Five people familiar with the test said the Chinese military launched a rocket that carried a hypersonic glide vehicle which flew through low-orbit space before cruising down towards its target.

The missile missed its target by about two-dozen miles, according to three people briefed on the intelligence. But two said the test showed that China had made astounding progress on hypersonic weapons and was far more advanced than US officials realised. The test has raised new questions about why the US often underestimated China’s military modernisation.

“We have no idea how they did this,” said a fourth person.

The US, Russia and China are all developing hypersonic weapons, including glide vehicles that are launched into space on a rocket but orbit the earth under their own momentum. They fly at five times the speed of sound, slower than a ballistic missile. But they do not follow the fixed parabolic trajectory of a ballistic missile and are manoeuvrable, making them harder to track.

The system, if fully developed, would hardly be the most threatening weapon in China’s arsenal. China also has been building silos for ICBMs, which experts say would be cheaper and much more accurate.

“The People’s Liberation Army now has an increasingly credible capability to undermine our missile defences and threaten the American homeland with both conventional and nuclear strikes,” said Gallagher. “Even more disturbing is the fact that American technology has contributed to the PLA’s hypersonic missile programme.”

Last month, Frank Kendall, US air force secretary, hinted that Beijing was developing a new weapon. He said China had made huge advances, including the “potential for global strikes . . . from space”. He declined to provide details, but suggested that Beijing was developing something akin to the “Fractional Orbital Bombardment System” that the USSR deployed for part of the Cold War, before abandoning it.

Just the largest country on the planet gearing up and peacocking the shit out of their new toys. Right under everyone's noses without us even realizing it.

What's scarier to you? A remote-controlled missile that travels at 6 times the speed of sound (how is that even possible?), flying at low orbit, undetectable and capable of carrying a nuclear warhead?

Or a space satellite system capable of reigning hellfire down upon us at any time?

Basically the Death Star. Ever heard of it?

For me, I gotta go with the F.O.B.S. (Fractional Orbital Bombardment System). That shit is terrifying. The fact we would all know there are satellites up in the heavens fixed over us that could zap us at any moment would cause a lot of stress.

All I know is thank God we're ramping up the Space Force.

Plus, if you're gonna pick your poison, you gotta go with the missile. Sure it travels a mile a second and can stop on a dime and change course. But big whoop. It only came within 24 miles of its intended target. Did you miss that factoid?

The big shots that used to work at The Pentagon that have commented on this thing say that the reason it's cause for concern is because of how the missile released a smaller vehicle which would be armed with the warhead. That vehicle glided toward its target. Such a missile could approach the United States not just from the north—as normal ballistic missiles would—but from the east, west, or south. It would thus evade our warning radars and, as one official put it, “negate” our missile-defense systems entirely.

Google- what is the fallout from a nuclear blast?

For reference, let's use Chicago as a detonation point (courtesy of Nuke Maps) 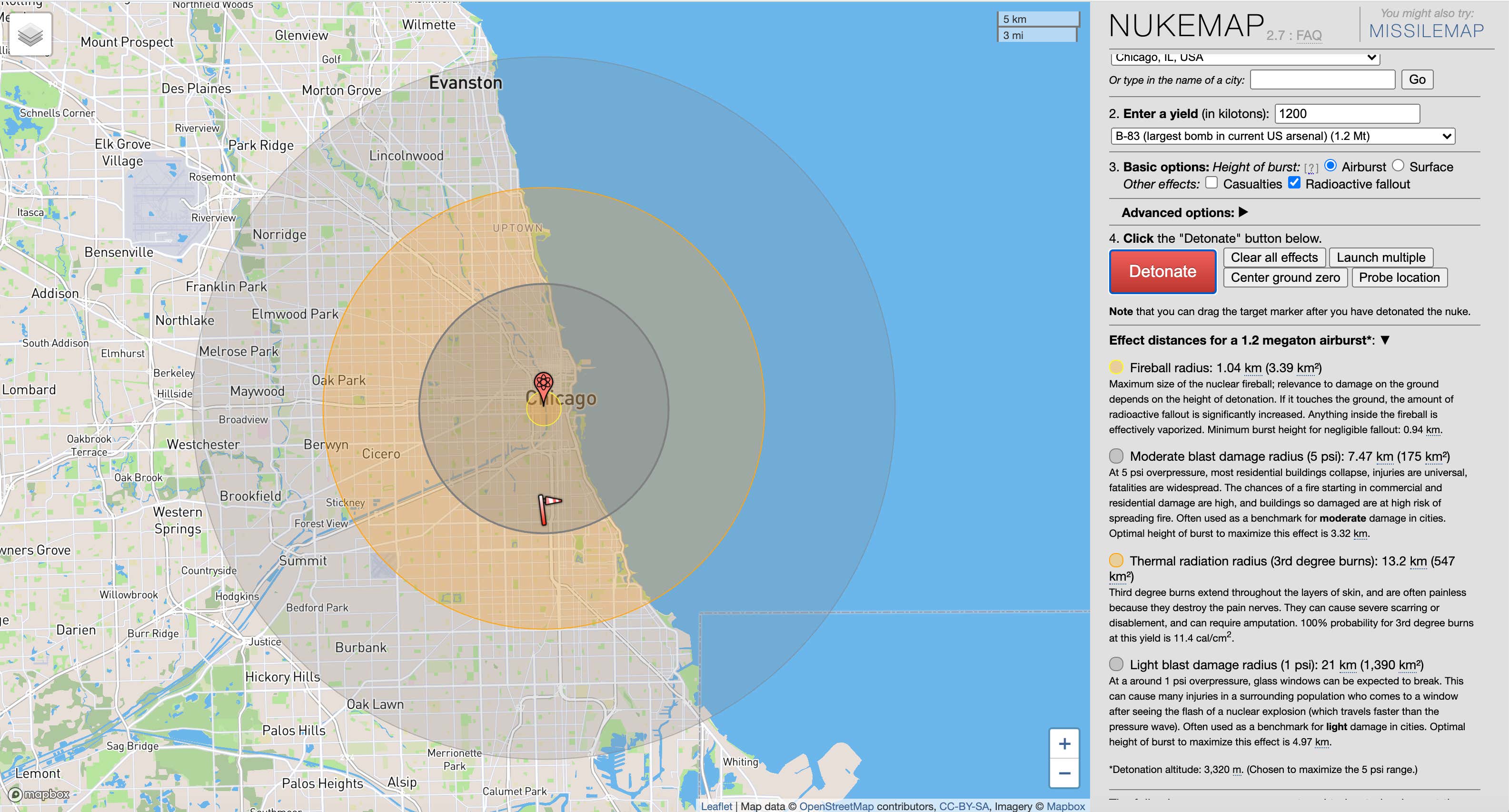 The People's Republic of Evanston, all the way down to Marionette Park. See ya later.

And all those batshit crazy Italian girls in Melrose Park are goners too.

Depending on the wind, which always seems to be blowing off the lake, the fallout would carry southwest and wipe out all those south and western suburbs too.

If I had to bet my life on it, I'd say Gary, IN would be the safest place and probably be left unscathed. If they've survived breathing that air and drinking that water all these years, then radiation won't phase them in the least.

Fun Fact - did you know why the group is called Fall Out Boy?

The name "Fall Out Boy" was chosen when the band asked the crowd in their second show what their name should be and an audience member shouted out "Fallout Boy," the name of The Simpson's fictional superhero, Radioactive Man's sidekick. The band wasn't even aware at the time that the name was a Simpsons reference.

p.p.s. - why does the remix with Kanye only have 275k plays? Do people not know about it?