Source - Facebook is reportedly planning to change its company name as soon as next week in an effort to distance itself from recent scandals and align itself more closely with CEO Mark Zuckerberg’s recent obsession with the “metaverse.”

Facebook’s app and website would be unchanged, the Verge reported, but the parent company will rebrand in a similar structure to that of Alphabet, which is the holding company behind Google and the firm’s lesser-known ventures.

Zuckerberg plans to talk about the new name at the company’s annual Connect conference on Oct. 28, but it could be announced sooner, the outlet reported, citing a source with direct knowledge of the matter.

For those of you who don't know... 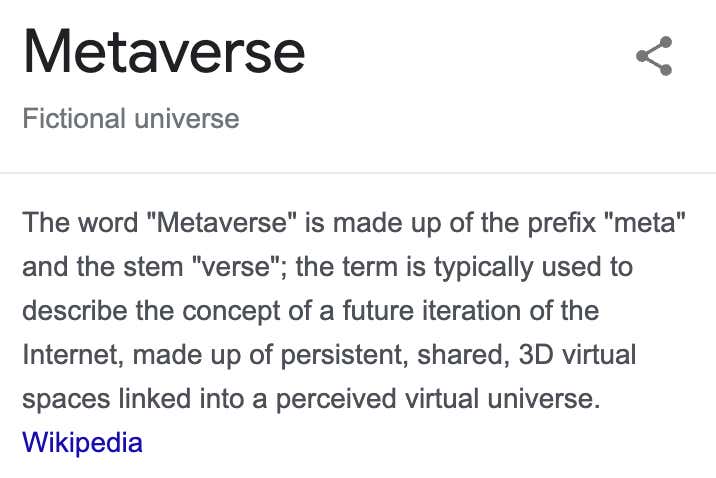 ^^Still confused? Here's a ten minute video that explains exactly what the metaverse is and how, according to nerds, it will end the internet as we know it. Regardless, Mark Zuckerberg being obsessed with the metaverse (whatever that is) to the point where he wants to change the name of Facebook is concerning to say the least. The man is in charge of a company that connects three BILLION people a month, you can't make these decisions on whim. What would he even call it? Does he have a name picked out or is he just gonna make one up on the fly? Imagine how confused the boomers would be when they went to log on to Facebook and it was suddenly named something else? They lose their minds.

The new name will reportedly reflect the company’s efforts to expand beyond social media — a business that has become increasingly plagued by critics and scandals in recent year.

Last month, Facebook unveiled its latest product: a pair of Ray-Ban “smart glasses” — a product Zuckerberg previously said is part of the company’s push to build a “metaverse company.”

When asked about the reported name change, Joe Osborne, a Facebook spokesperson, said, “We don’t comment on rumor or speculation.”

Other people are saying Zuckerberg wants to change the name to distance the company from all its recent scandals, but that's neither here nor there. Zuckerberg has reached the point in his life where he's so rich, so powerful, so detached from reality that he wants to reinvent the internet and rename one of the largest companies in the world to "better align" with his vision. Will it happen? Of course not, but it's wild to think that it could. Oh well. Hopefully Zuck chooses a good name when he does. Comment below what Facebook should be renamed too. Thanks for reading!