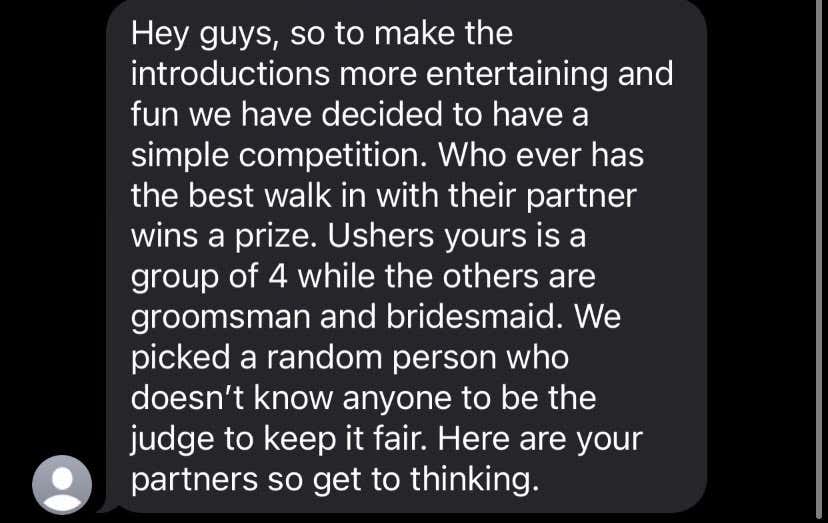 I'm being selfish but I would legit rather have my buddy tell me he's contracted some exotic illness days before the nuptials. Nothing life threatening but something heavy enough where they have to cancel the wedding and lose all the security deposits. Maybe a simple outpatient procedure that still requires a full bodied anesthesia cocktail and multiple incisions. Something that flirts with your In-Network Out Of Pocket Max without the gravity of confronting death. To me that would be a better situation for the wedding party as a whole than springing a wedding entrance dance competition via group text just a few days out from the reception.

In fact on second thought, you could give me as much or as little time to prepare and it wouldn't make a difference. I still hate your fucking guts and I'm certifiably resentful over this request.

Now a lot of people are telling me to go easy on the groom. They're saying This Is Classic Bride Stuff!! Blame her for the shitty idea!!

Personally I don't subscribe to that theory. The Bride & Groom become one in the wedding planning and development process. Accountability is spread equally. Just because your buddy is taking it up the ass doesn't mean he's free and clear from criticism. So what if his old lady put this idea together? That man still has to communicate it and that's where it falls apart. You guys gotta be stronger and smarter than this. You have a whole life to get tossed around like an emotional rag doll. If there's one night you respectfully say "I don't think that's such a good idea, babe" then it's this goddamn night and it's for this utterly specific reason.

I might seem dramatic and that's authentic. We talked this week at Barstool Chicago and basically everyone agrees that wedding entrances are the absolute worst. Even so, the majority exist unscripted until the minute before you walk out. While nauseating, it's been an informal and undemanding part of the experience. I'll roll my eyes if we have to but I'll ultimately suck it up and make the entrance. I'll do this for my good friend.

Where I draw the line is the planning. This is your wedding, Buddy. I'm doing you a favor clearing the schedule to uphold an unspoken obligation that I too wear a rented tuxedo for 14 hours. I'm writing a sizeable check to cover an extra plate or two from the cheapskates. I will carve the shit out of your dance floor with these ruthlessly uncomfortable oxfords. And along the way I promise to small talk the shit out of your extended family no matter how meaningless or insignificant that conversation may be. I'll ask every cousin about their college major and career plans. All the aunts and uncles about you as a baby. The family friends won't leave without knowing that your ambition is the real difference maker amongst us peers. Everybody gets the full package when you put me in the wedding party.

That is until you tell me I need to choreograph a wedding entrance with an awkward bridesmaid. Everything goes out the window when you dangle $50 gift cards to Lou Malnati's over my head like I'm Pavlov's dog. The asking price for me to try in this situation is significantly higher.

Hopefully I'm not alone in this quest. Again not calling for an all out ban on wedding entrances but just saying read the room a little bit. Especially when that room is full of the people you hand picked to celebrate the biggest day of your life. If you can't get the messaging figured out for that crowd then you got much bigger problems than a lackluster wedding entrance ensemble.

That said, don't be afraid to go heavy finger pistol. Something about black tie finger pistols really plays. People forget that and I want to remind you.

For more on wedding etiquette and proper guest techniques, check out this week's Snake Draft.