Source - Scary moment for race fans in Connecticut this weekend -- a car flipped and crashed into a fence mid-race ... leaving multiple people injured.

The wild wreck happened Sunday night at the New London-Waterford Speedbowl during a 100-lap event.

In footage from the track, you can see driver Tim Jordan lost control of his car when he made contact with an opponent while fighting for 5th place.

Jordan's ride ended up on two wheels ... before it terrifyingly crashed into a fence where fans were standing. According to track officials, several people were injured in the incident ... though they claim, thankfully, everyone is expected to recover just fine.

Here's the thing about racing, you're really always only seconds away from death. Whether it be in the stands or behind the wheel, all it takes is one wrong move and you're screwed. When I was in in Bristol with Large and Spider for a race, I was shocked at how close the fans got to the track knowing they could get destroyed at any moment. Like people were literally hanging on the fence a foot away from the track where cars were driving 150mph. It was insane. Regardless, it's a miracle that no one got seriously injured after seeing that car go flying by. It was basically driving on the wall. Look at this shit... 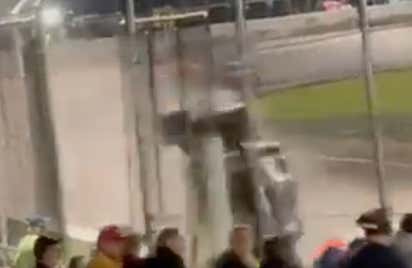 Not only that, there's also a 1000% chance those fans were drunk which makes it even more of a miracle that everyone was fine. The track released a statement on the crash after the crash…

Wild. Let this be a lesson to everyone attending races from here on out that you should always have your head on a swivel. You never know where danger is going to come from. Glad to hear that everyone was okay.