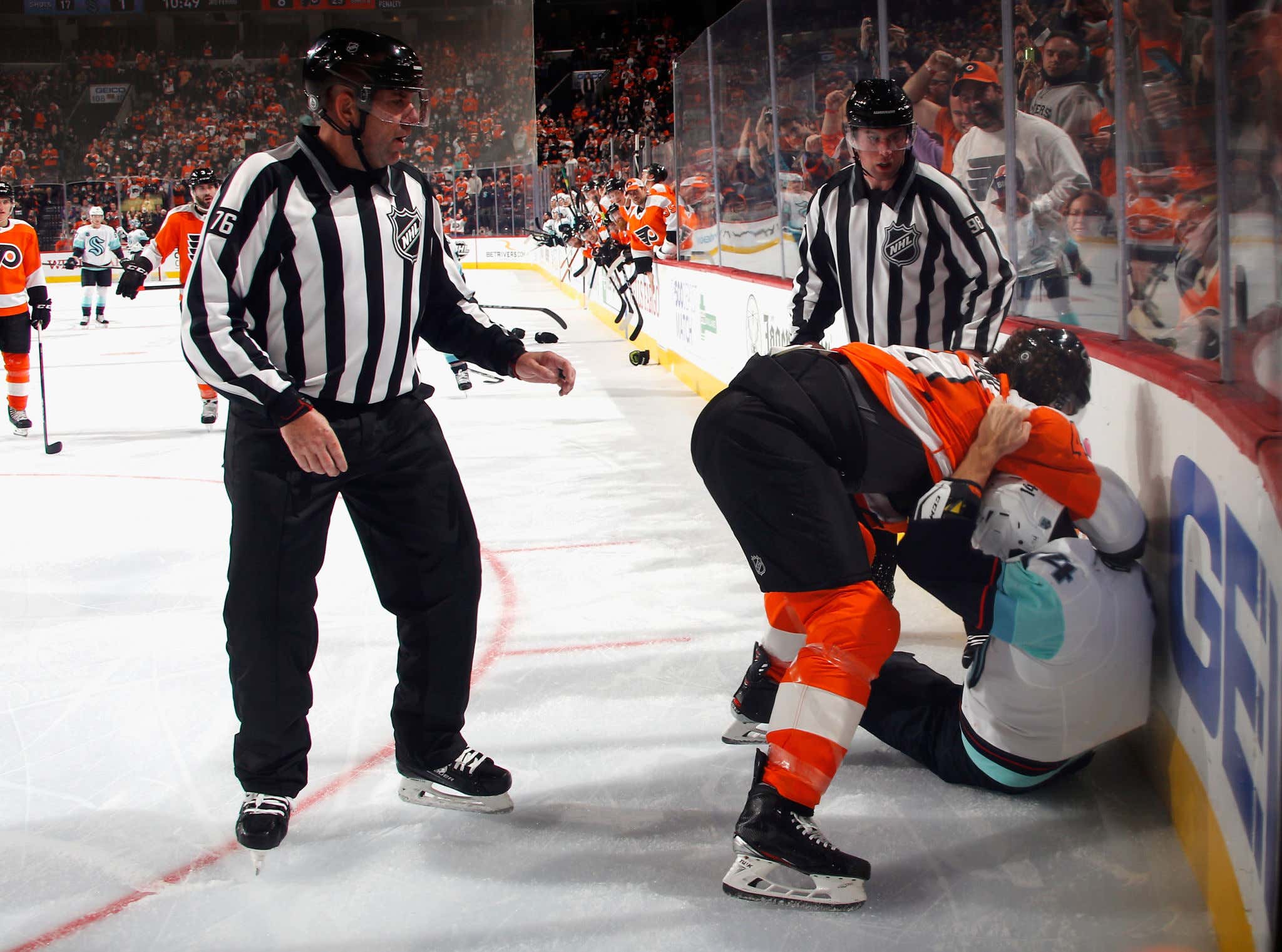 The Seattle Kraken got their first real welcoming to the NHL last night. Everybody else always wants to be buddy buddy with the new kid. You had Vegas ease them into things with a 4-3 win over Seattle on the opening night of the season. Then the Preds handed the Kraken their first win in franchise history on Thursday night. On Saturday, the Kraken took the Blue Jackets to OT before ultimately losing. So 3 games to start the year and they were all close, competitive, 1-goal games.

The Philadelphia Flyers simply do not give a fuck. They want to bully your franchise into submission and turn your fans into some hopeless losers before you even get a chance to play at home for the first time. ESPECIALLY if you're going to be bringing Dave Hakstol back to Philadelphia every time you play here. So being the bad guys of the league, the Flyers made it their goal to ruthlessly assault the Kraken last night both physically, and on the scoreboard.

This sequence was so horny. You've got Yandle stepping up to make the quick play to steal the puck away and get it moving up ice. Then you've got Brassard making the smart play to just advance it forward as best as he can. Atkinson makes the sick touch to knock it down to himself and then just put one on net hoping for a rebound. And then Joel Farabee steps up and launches a rocket ship bar south off the rebound to make it a 5-goal game again. It all happened so quickly, and it all kicked so much ass. That's how a wagon operates.

But what fun is a shit pumping if all the domination just goes down on the scoreboard? At that point the game just becomes boring. Sure, the fans love the goals and everything but it reaches a certain point where it just gets sad. It gets uninteresting. And while Broad Street may not be Broadway, the fans are still expecting a show.

The Seattle Kraken took Jamie Oleksiak in the expansion draft to be their big bad tough guy. To be the Chara-like threat always looming over everybody on the ice. The dude is huge. He's listed at 6'7" and 255 el bees.

So he comes all the way down the ice after the whistle to instigate a fight because his team is getting their asses kick. He probably wasn't even trying to actually get into a scrap since he figured that everybody would be too afraid of the big bad ogre to drop the gloves with him. Turns out he was dead wrong because depth defenseman Nick Seeler (5 inches shorter and 50 lbs lighter) had literally no hesitation going with him. Hell, he even threw the ref out of the way to get after Oleksiak.

He may have technically lost the fight but that didn't matter. The fans were still loving it, the barn was still rockin', and the boys were still buzzin.

And then we've saved the best for last. Because out of all the demoralizing moments that happened to the Kraken last night, this one coming up had to have been the worst. It all started earlier in the night when Nathan Bastian (literally never heard of the kid before last night) tried to go after Claude Giroux at the faceoff circle after Justin Braun put the Flyers up 5-0.

Now Claude Giroux is a tough son of a bitch. He's also been known for his wires to cross from time to time. And after the verbal beatdown Claude gave to Bastian in the penalty box after that scrum, there should be no doubts that Giroux would have beat the brakes off of Bastian on his own.

But this is what great teammates are for. Nasty Nate Thompson knows that Giroux can stick up for himself. But he also knows that Giroux's hands are a bigger asset for this team when they're scoring goals rather than cracking skulls. So later in the night it came time for Nathan Bastian (again, no idea who this cat even is) to answer the bell. It was time to pay the toll. And unfortunately for that poor son of a bitch, the toll booth operator that time was the Nate Dawg.

Oh my god. Nasty Nate just killed a guy. Buddy was force feeding knuckle sandwiches to Bastian while all that bozo could do was hang on and pray he got out of there alive.

And that's the message to the rest of the league. You disrespect the captain, you've got an all-you-can-eat knuckle sandwich buffet coming your way. Feel free to go up for seconds, too.

Offensive explosion in the 1st. Giroux, Farabee and Konecny all getting their offensive game going early on in the season. Perfectly fine defense all around. A couple of huge stops from Carter Hart. And the boys all sticking up for one another out there. I know it's early in the season and that was just one win over a brand new franchise. But the Philadelphia Flyers look like they're going to be dangerous this year. Hell yeah, brother.