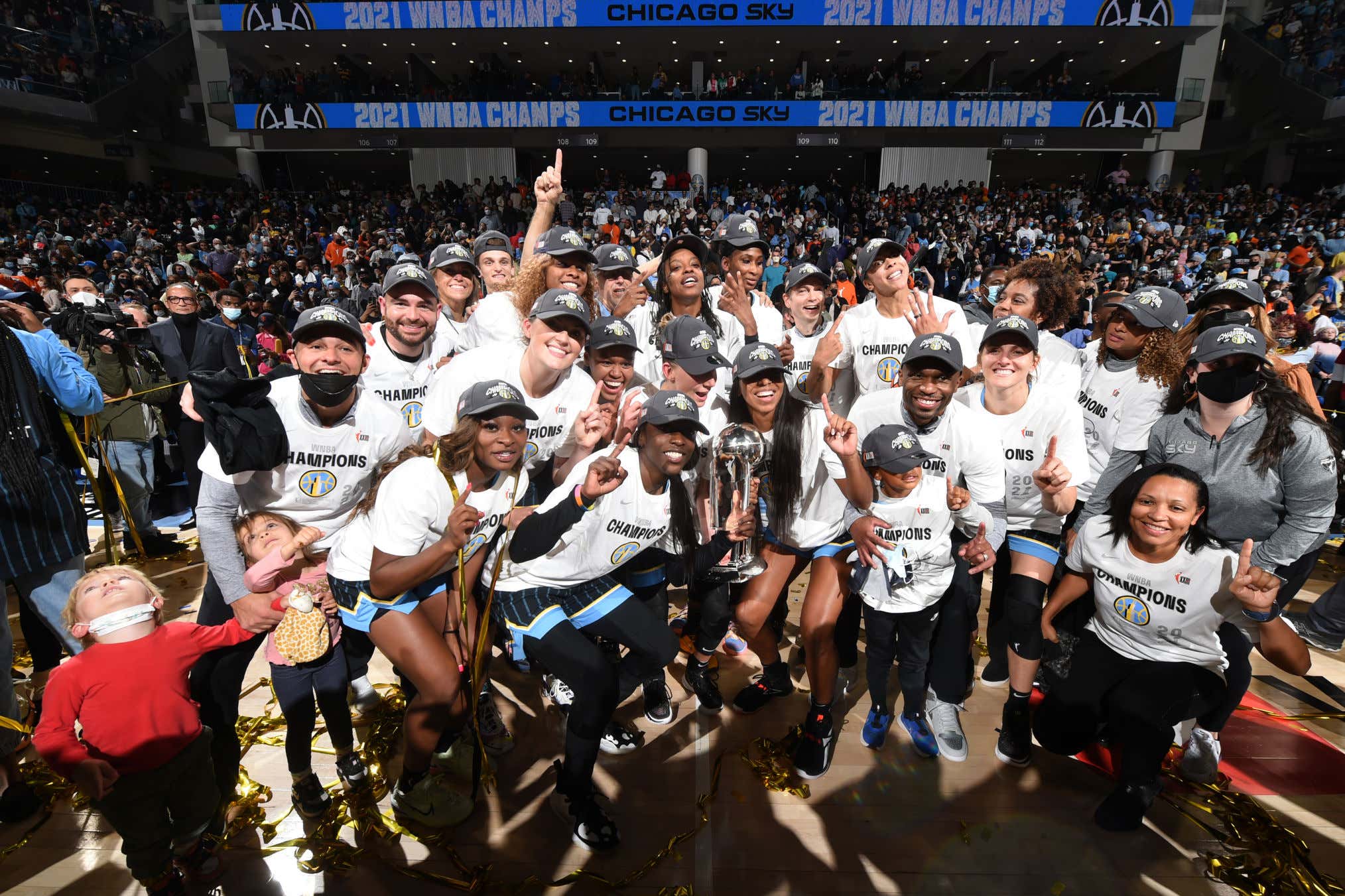 CHICAGO (WBBM NEWSRADIO) — Plans are still being worked out for the city to celebrate Chicago’s latest sporting champions, the WNBA’s Chicago Sky.

Mayor Lori Lightfoot called the Chicago Sky championship is an amazing story, telling 670 The Score there will be a rally for the Sky tomorrow in Millennium Park.

“What I saw a lot last night was a lot of dads bringing their daughters to watch these incredible women play at the height of their talent and, they’re going to be little girls that were in that crowd last night or saw it on TV that are going to remember this for the rest of their lives,” she continued.

She also added the Sky championship couldn’t have come on a better day after the Chicago Bears lost again to the Green Bay Packers.

I actually love this move even if that means I have to tip my cap to Lori. There's nothing better than an old fashioned championship parade or rally. They don't come often and when they do you just have to soak it up and party. Some of the greatest day drinking moments in my generation's life has come at Blackhawks parades. The 2016 Cubs rally was the largest gathering of human beings in the history of Western civilization. The Bulls spent more years in the 90's hosting rallies than not hosting rallies. Obviously nobody ever forgets about the '05 White Sox and their championship. A lot of that comes back to having a good parade and rally atmosphere.

Personally I take some pride in Chicago's ability to show up. Remember the Miami Heat's first title? The internet spent more time shitting on their turnout then applauding LeBron's efforts. A lot can make or break the way a city embraces the post championship celebration. This is where Chicago excels and comes to life.

On that front, nothing compares to a Stanley cup chase. The 2015 cup chase might have been the best in the trophy's history. People were coming out of the woodwork so hard to hand out tips. My uncle works the night shift at the Rosemont Gibsons and he overheard a bartender say the cup was at Emerald Isle because one of the assistants is dating a girl from Edison Park. You'd hear stuff like that non stop for the first 48 hours. Trying to track down the cup is one of the most authentic pleasures you can experience as a sports fan. Those were wild times when the Blackhawks made us proud.

Now it's the Sky's turn. I have no idea what to expect at this rally. I can only hope for a positive turnout and some good old fashioned speeches from drunk teammates. Those always hit even if it ends up with your cornerstone franchise player mistakingly giving away millions of dollars worth of sports memorabilia:

Idk where that ball is but wouldn't be surprised if it was gifted to a potential supplier in exchange for more favorable terms on wholesale hot dog pricing. That would be on brand but now we're getting off track.

Point is there's a rally tomorrow in Millennium Park. We like that a lot. More details coming but start planning now. Weather should be ripe for an afternoon buzz.

UPDATE: Parade starts at 11am. Rally at noon. 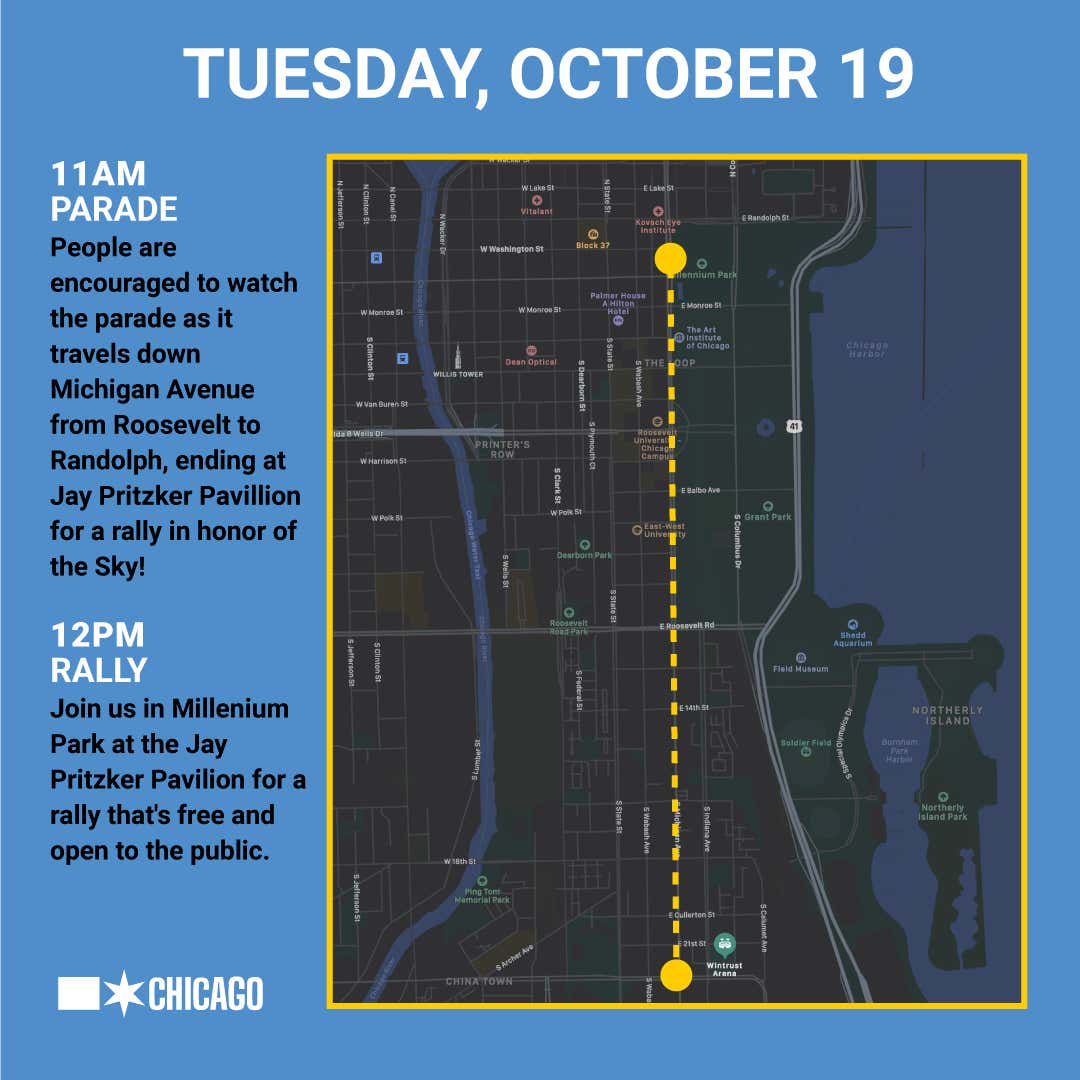