What an absolute train wreck of a football game. And to be clear, we STINK. Without question the most disappointing team in the NFL this season. I thought this defense was supposed to be "much improved". Nah, we left DeAndre Hopkins more open than he's been in his entire life. I thought we had a wizard of a head coach. Nah, we simply refuse to kick field goals and take points. I thought we had the best rushing attack in the league. Nah, both our running backs are hurt. And I thought we finally found our QB. NO WE HAVE NOT.

Listen, I know that the city of Cleveland is split 50/50 right now on the topic of signing Baker Mayfield long-term to be our franchise quarterback. Side note: I didn't realize 50% of the human population in Cleveland was blind, but that is a topic for another time. HOWEVER, one thing that every single person in that stadium and watching this team at home better agree on is that Baker Mayfield is NOT worth what top QBs are getting paid. Josh Allen money? Lamar Jackson money? Patrick Mahomes money? No offense but if you believe that then you need your head checked out. You belong in an insane asylum.

I see IDIOTS on Twitter still defending him. Folks, 3 turnovers is not a good football game. And I see people saying he's sooooo tough. Folks, if you lose a fumble, your 3rd turnover of the game, and need helped off the field, but come right back in the next possession and don't miss one second of action, you are NOT hurt. You simply had the Loser's Limp. A classic "I made a bad play so I'm hurt" injury. I give Baker no credit for coming back in the game. Zero.

And while we're bitching, OBJ isn't worth what we're paying him either.

And it's not all OBJs fault. For whatever reason, Baker doesn't look at him when he's wide open. BUT when he does throw him the ball, specifically on 4th down, OBJ simply cannot catch it. If we can find anyone to take him off our hands for a mere $15 million a year for this year and the next two, we need to do it immediately. Wasted money that could be used elsewhere.

AND ANOTHER THING, this team got their ass kicked every which way today, to the point where I shouldn't even mention the refs. But those refs absolutely sucked too. What did we have, 6 penalties in 8 plays in the first quarter? And it didn't stop there.

Tough to win football teams when your quarterback stinks, your wide receivers can't catch the football, your running backs are hurt, your offensive tackles are both out, AND the refs are against you. It's not like the Cardinals needed any help today, but they sure got it. 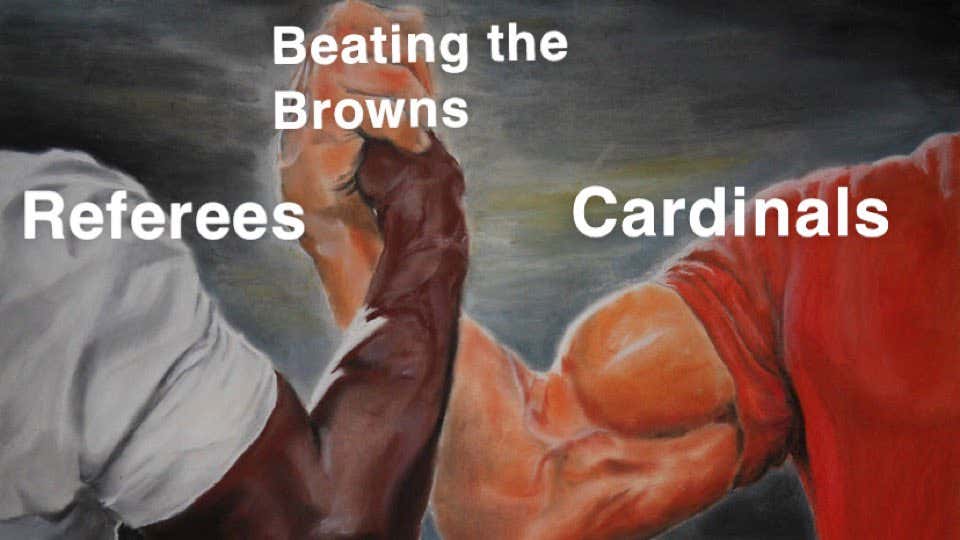 3-3 and tied for last in the AFC North. And it's a short week with the Broncos coming to Cleveland on Thursday. Must win? MUST WIN.