Notre Dame grinds out a 13-7 win over Army at the Polo Grounds. Grantland Rice, a writer for the New York Herald Tribune, covers the game. Rice, often known for his dramatic prose, wrote perhaps the most famous description of Notre Dame’s backfield (Jim Crowley, Elmer Layden, Don Miller, and Harry Stuhldreher), comparing them to the Four Horsemen of Apocalypse. The Four Horsemen would lead Knute Rockne’s Fighting Irish to their first official National Championship with a record of 10-0. 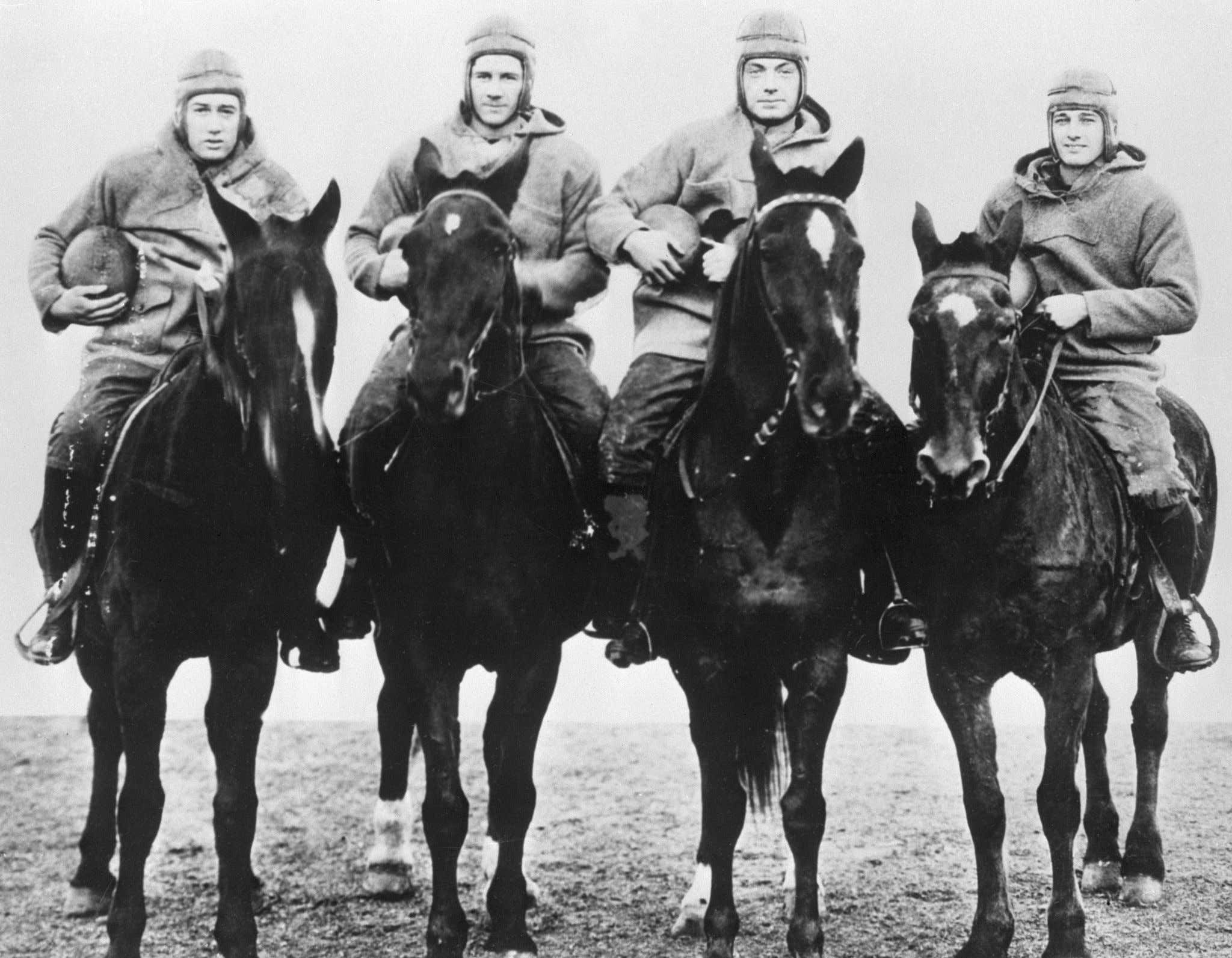 Outlined against a blue-gray October sky, the Four Horsemen rode again. In dramatic lore, their names are Death, Destruction, Pestilence, and Famine. But those are aliases. Their real names are Stuhldreher, Crowley, Miller, and Layden. They formed the crest of the South Bend cyclone before which another fighting Army team was swept over the precipice at the Polo Grounds this afternoon as 55,000 spectators peered down upon the bewildering panorama spread out upon the green plain below.—Grantland Rice, New York Herald-Tribune.

With just 77 words, a quartet of football players from Notre Dame became the biggest football stars in the world. The Irish had been a strong program for years under Coach Knute Rockne, but it was not until 1924 that the team captured its first official National Championship. The Irish could lay claim to the championship by beating Army 13-7 at the Polo Grounds. Leading the Notre Dame charge against the Army was quarterback Harry Stuhldreher, fullback Elmer Layden and halfbacks Jim Crowley and Don Miller. During their three years at Notre Dame, the Four Horsemen would lose just two games, going a perfect 10-0 in 1924, their senior season. The Notre Dame season culminated with their first appearance in a bowl game, as they beat Stanford 27-10 in the Rose Bowl.

Three of the four horsemen would have limited experience playing professional football, as the NFL was still in its infancy and had trouble landing big college stars, as professional football was looked down upon by society. Each would embark on a coaching career. Don Miller served as an assistant coach at Georgia Tech and Ohio State. Harry Stuhldreher had a successful career as head coach at Wisconsin. Jim Crowley would coach football at Fordham; one of his more notable players was Vince Lombardi. Elmer Layden returned to South Bend in 1934; coaching the Irish for seven seasons, he would compile a record of 47-13-3. After his tenure at Notre Dame, Layden was chosen to be the first commissioner in the NFL, serving from 1941-1946.