We often speak in hyperbole on the blog, but I kid you not when I say this is one of the funniest things I've ever seen. Kevin described it perfectly, his right quad was "maxed out." Look at this mess... 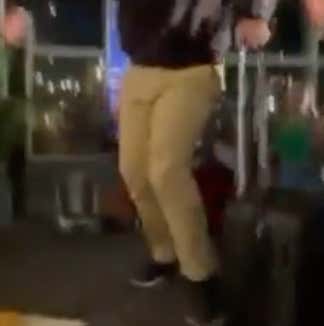 You'd have thought he had bricks in his suitcase the way he hauled it up. Not only that, his left foot barely cleared the ledge which basically resulted in him falling into Ria's arms. The entire scene was incredible. Thank god he caught himself otherwise his reputation would've been ruined. Then again maybe not, his fans are die hard. That's it for this one. Thoughts and prayers to Trent's knee. Have a great Friday, friends.