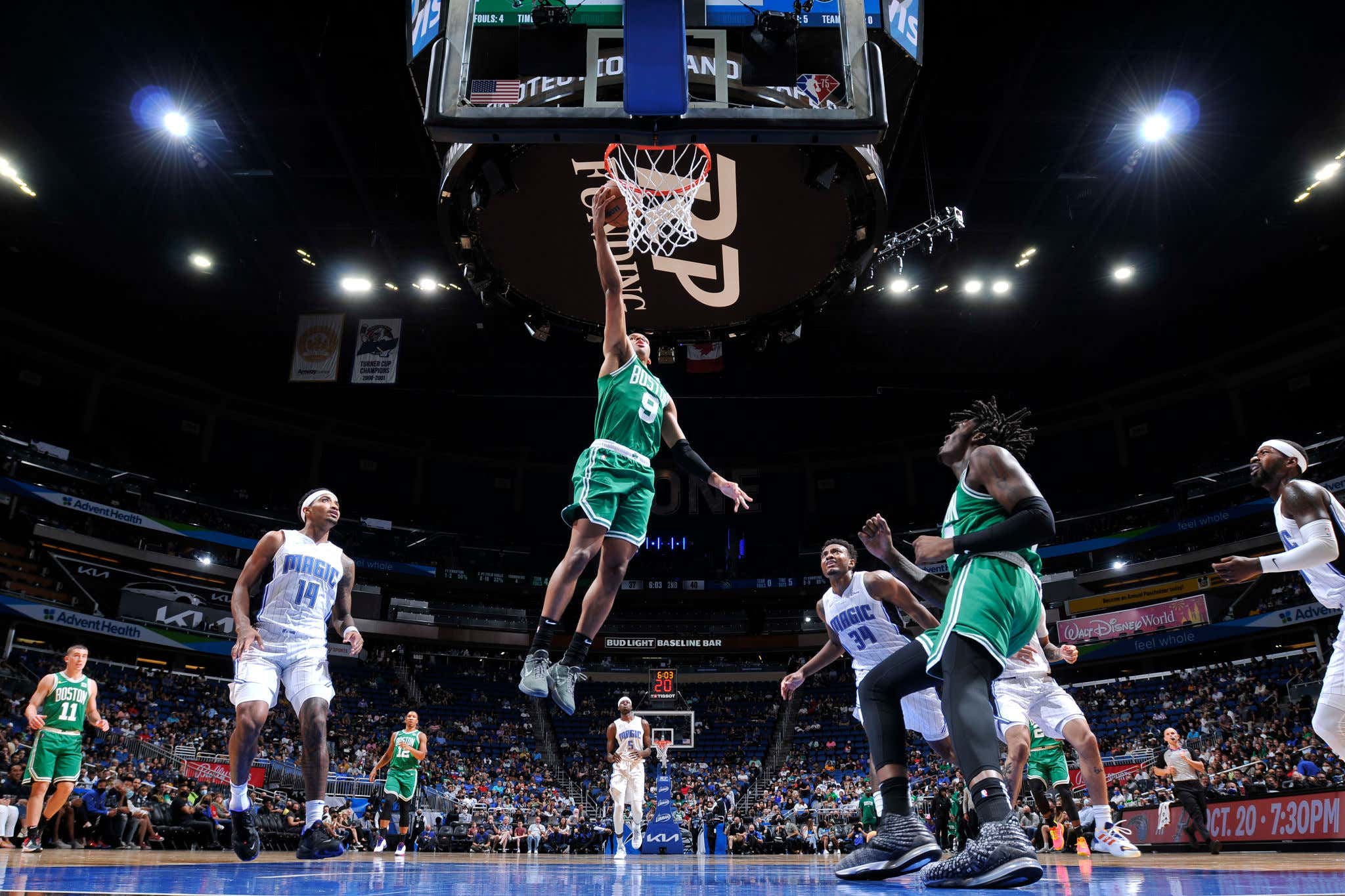 Given how the Celts preseason has gone, first with a 1 point win and then a 2 point win in their  second game, it was no surprise that they once again found themselves in another nail biter down in Orlando. This time it was the Summer Celts chance to shine with pretty much everyone getting the night off outside of Rob, and for the most part they looked pretty solid outside the last 15 seconds of this game. Better to get these gut punches out of the way early in these fakes games is what I always say. So while part of me is bummed the Celts are no longer undefeated in the preseason, I walked away from the game last night more encouraged than ever.

Why? Because we saw exactly what we wanted to see from some pretty important young pieces that couple play a valuable role as we move forward into the regular season. That's really what last night was. A chance for guys like Payton Pritchard, Aaron Nesmith, and Romeo Langford to get some extended run and show what they could do with that opportunity. The results were something I think you'll be pretty happy with. We know what we're going to get from the starting group. Those three though? Those are the wild cards as we enter the season.

When it comes to the young role players, you're really just looking for signs of progress in their development during these preseason games. Personally I would have loved to sneak out of there with a win because I'm mentally deranged, but the bigger picture is how they look when given an extended role. Let's talk about it.

- Since the second Aaron Nesmith stepped on the floor in Vegas this summer, he's been a different player from what we saw last year. More scoring and passing off the dribble, more of a midrange game, the same high energy play, it's been awesome to watch. I never really understood why there were so many people last year that immediately called him another Danny Ainge draft bust. It's almost like people don't realize he shot 39% from three over the last 37 games of the season. As he got more comfortable at the NBA level, his shot followed. Combine that with his high energy play, you can see there's something there.

Then he showed up in Vegas and dominated. You say OK, that's just Summer League. Let's see what he does against better competition. OK, fair. Enter last night

I suppose this is where some people will say "OHHH BIG DEAL THE MAGIC". Yeah, it is a big deal. Watch those highlights again and tell me you aren't seeing an improving player. That's all that matters here. That Aaron Nesmith is making the most of his opportunities and is making it harder and harder for Ime to keep him out of the rotation. You can only play who is in front of you that night, and the fact that Nesmith took this opportunity and ran with it is exactly what every Celtics fan should want to see. Look at those turnaround jumpers off the bounce. That's eerily similar to a Young Jaylen. It's a move we did not see Nesmith confident enough to attempt last season. Those are good things.

Defensively, there are still issues. He's most certainly not a perfect player. But you're telling me this roster can't use a high energy guy who is a legit sniper from three that is showing he can now maybe score effectively at all three levels? I mean don't take my word for it, just listen to Ime

- It may have been the reserves, but the ball movement continues to be great this preseason. The fact that the end of the bench guys are playing the same way as the starters when it comes to this tells me that the message from Ime is getting through to everyone. A total of 23 assists on 39 FGM to only 12 TOs. The ball is popping and the Basketball Gods are rewarding good ball movement. We'll see how long this holds up once the games count for real, but the way this team is passing the ball is for sure noticeably different from just a year ago.

- With no Smart, no Scroder, and no Richardson, there were really no other regular primary ball handlers active last night besides Payton Pritchard. So what did he do in his 15 minutes of action? Made it fucking rain

The bad news is he most likely broke his nose and didn't play in the second half. Between the covid issues and now this, it's like last year all over again. On the plus side we'll probably get to see Masked Pritchard who will probably be an unstoppable force, but with how well he was playing before getting hurt last night that sure was a bummer. He's another guy that has looked much better since the second he arrived in Vegas. If he's going to continue knocking down these 35 footers with ease, I don't know how Ime keeps him off the floor.

- Did Jabari Parker lock up the 15th roster spot last night with his performance off the bench? I think he may have. You see when it comes to Parker, you should expect him to show out against this lower competition. That's never really been the question with him

It's having to rely on him against the good teams that you often find yourself in trouble. But for a 15th guy? The skillset intrigues me. Especially if this three point shooting is real. Maybe during a game where the second unit is going on a scoring drought you kick the tires and see if he can give you a few buckets. His only real competition for that 15th spot was Garrison Matthews, and I'm not sure he's shown anything to take it from Jabari. Unless there's a move we don't know about if someone gets cut from another team, I can't see Jabari not getting that 15th spot.

- Much like Nesmith and Pritchard, last night was a pretty big opportunity for Romeo as well. He's someone who didn't really show out in Vegas because he got hurt, but has already had his moments this preseason. Now with the ability to play more (27 minutes) I was interested to see how he would respond. What I saw was a much more confident player

The three may not have been working for him in this game (0-3), but his floater game sure was. I thought he did a good job of being aggressive and attacking the basket and we even saw a little bit of his developing playmaking, especially off the dribble. I'm intrigued at the idea of certain lineups having a Point Romeo for stretches. I also thought his defense was much better for the most part as well, which is encouraging.

With Romeo, he's still just such an unknown. We don't really know what he is one way or the other yet simply because he's barely played. He could end up flaming out, or he could end up being a legit rotation piece. The dude has played just 50 NBA games in his career, including just 18 last year. If the version we saw last night is who we get during the season, you can work with that.

- The best way I can describe Rob is that he impacts shit. Whether it's challenging shots, blocking everything in his path, or making hustle plays like this

When Rob is on the floor he finds a way to make his presence felt. Having said that, we're still seeing him get baited on pump fakes. That shit has to get figured out. Stop biting on fakes Rob, please. It's your one major weakness right now in my opinion.

- Shoutout Theo Pinson for putting this team on his back down the stretch and nearly winning it by himself. He won't be here in a week, but that was fun to watch.

- Slim Grant continues to be effective as a defender and that's exactly how he's going to earn minutes. He actually did a little bit of everything last night with 4 assists, 3 steals, and 1 block. The offense wasn't there like in previous appearances, but defensively? He's looked great.

- I know he was just a training camp body, but I do not foresee a future on this roster for Ryan Arciadiancono. His short Celtics tenure has been pretty terrible. He's not quick enough either with a first step or in transition, his passing hasn't shown up at all and things tend to go south in his minutes. I don't think he ever had a legit shot at that 15th spot, but if this was supposed to be an audition to other teams in the league, it hasn't been great.

- There was no answer for RJ Hampton which proved to be costly. He basically got whatever he wanted off the bench for his 20 in 25 minutes, and it felt like he was playing faster than everyone.

- Nothing like having a 6 point lead entering the fourth quarter and shooting 38/31% while giving up 30 points to ultimately lose the game. If that wasn't the 2020 Celtics I'm not sure what is. Granted, even the starters of this "reserves" game didn't play a single second of that fourth quarter so this was really the end of the bench guys but still. That shit was annoying.

- What else could we put here other than the last possesions. I'm not sure what the hell they were thinking offensively, but this possession is just flat out gross. Jabari dribbling for forever, only to pass it to a heavily guarded Garrison Matthews in the corner who had virtually zero time on the clock to get this horrendous shot off

and once that happened you KNEW what was coming. We've lived through these type of moments before. The fact that the Magic hit this game winner was the least surprising thing I've ever seen

Hauser actually played perfect defense there too which is what really was a twist of the knife. Couldn't have defended it any better, just a great shot. Frustrating for sure, but credit where credit's due.

We now move our attention to the preseason finale on Friday against MIA. They rested their whole roster last night and are using tomorrow as their dress rehearsal. Assuming Ime does the same (minus Jaylen and Al) it'll be a nice little measuring stick against a team many predict to finish top 3 or at the very least higher than the Celts. I'm just going to tell you now, prepare for another nail biter. That's just how these preseason games have gone, so I expect nothing less tomorrow night.