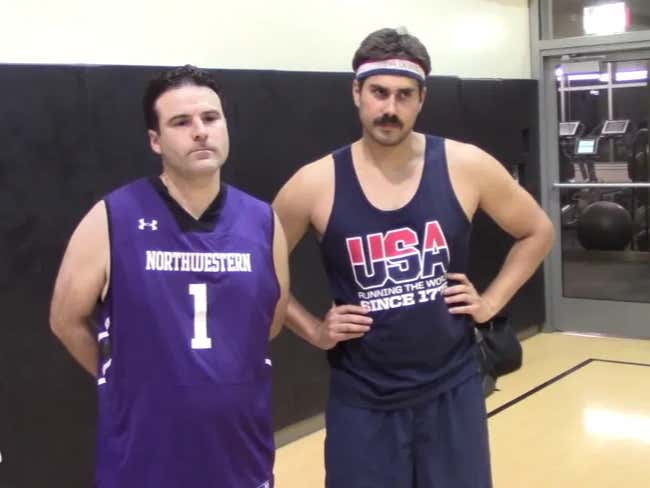 Dante crushed it when posted this already:

… but I simply cannot resist weighing in. At Blogger School they told us never to be afraid to double post. So cover me. I'm going in.

Most of us start our day reading that Adam Schefter was letting Bruce Allen, then of the Washington R-words, read, review, fact check and edit his reporting on that very same Bruce Allen - even addressing his subject as "Mr. Editor" - with varying degrees of alarm:

I mean, it seems like a strange way to go about covering public figures with any degree of journalistic integrity. But then again, maybe it's a way for an emerging star reporter like 2011 Schefty to gain some trust among the power brokers in the league. He let's them know they can trust him, and down the road they'll reward him with all the big scoops and everybody wins.

If that's the case, you certainly can't argue that it hasn't worked for everyone involved. Schefter's been lapping the field when it comes to breaking stories ever since. And one capital-J Journo who came to his defense was Darren Rovell.

Now, granted, Rovell has not always endeared himself to the people he covers:

But by golly, that's not going to stop him from defending a member of his own profession. 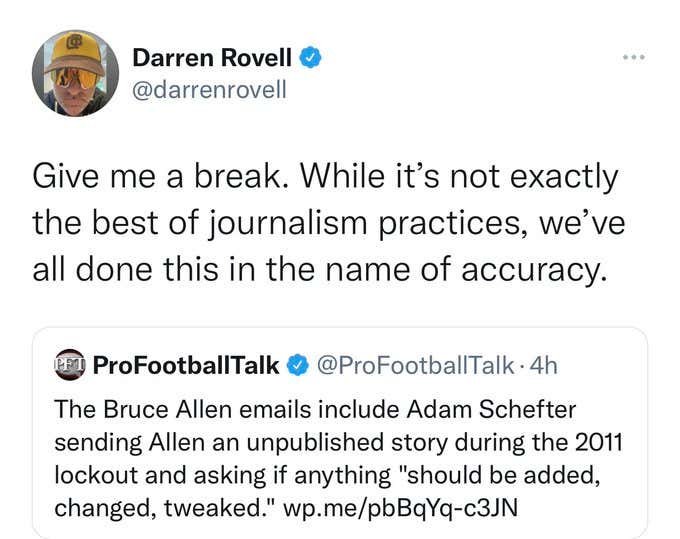 And then deleting the Tweet when he faces a major backlash. And then posting the deleted Tweet in screencap form and standing by its original intent.

And then referring to the people in his 2 million-strong audience who read his post and responded to it as the mob, mobbing:

So Rovell was involved in more social media noise before 9 a.m. than most journalists have in a lifetime. And sure, I could post hundreds of the angry replies he got from what Bill O'Reilly used to call "the folks." But why bother? When the real hatred came from one of the true practitioners of the craft, Keith Olbermann:

I don't think there's a man in America who spends more time scanning the skies over Twitter looking for a target to cross his radar so he can unleash his unique brand of Hell. No lie, a bunch of years ago I got clapped at by him in the middle of a Red Sox game for something I posted. And he went so far as to search my bio and ask why a comic was home on a Thursday night watching a ballgame instead of working at a club. I wasn't even mad. I was truly impressed by the energy he invested in trying to disintegrate a guy with a few tens of thousands of followers. That level of commitment is almost awe-inspiring.

But this dig at Rovell? It's perhaps some of his finest work. It's the sort of thing you'd expect to hear out of a very erudite serial killer just as he's about to dispatch his latest victim. No matter whose side you're on in this beef, you have to admire the pure, unfiltered spite on display in these few words.

And because social media is a gift that Satan gave mankind so that we'd find better, faster, and more inventive ways to hate each other's miserable guts, Rovell was not to be outdone:

Holy shit! So that's what this is all about? This animosity goes back 15 years to when Topps printed Alex Gordon rookie cards before he was technically eligible under MLBPA rules? And Olbermann was trying to corner the market but Rovell blew his cover? Hell truly hath no fury like a collectibles nerd scorned. And the internet rivers will run red with the cyberblood of anyone who dares foil their glorious schemes.

For some reason, the hostilities in his war quickly subsided. There hasn't been any further skirmishes since this morning. And believe me, I've been checking. Hopefully the two can cease the cease fire and get back to lobbing bombs at each other because that's the content we need. When two deranged, high-profile and polarizing journos do battle, we all emerge victorious.