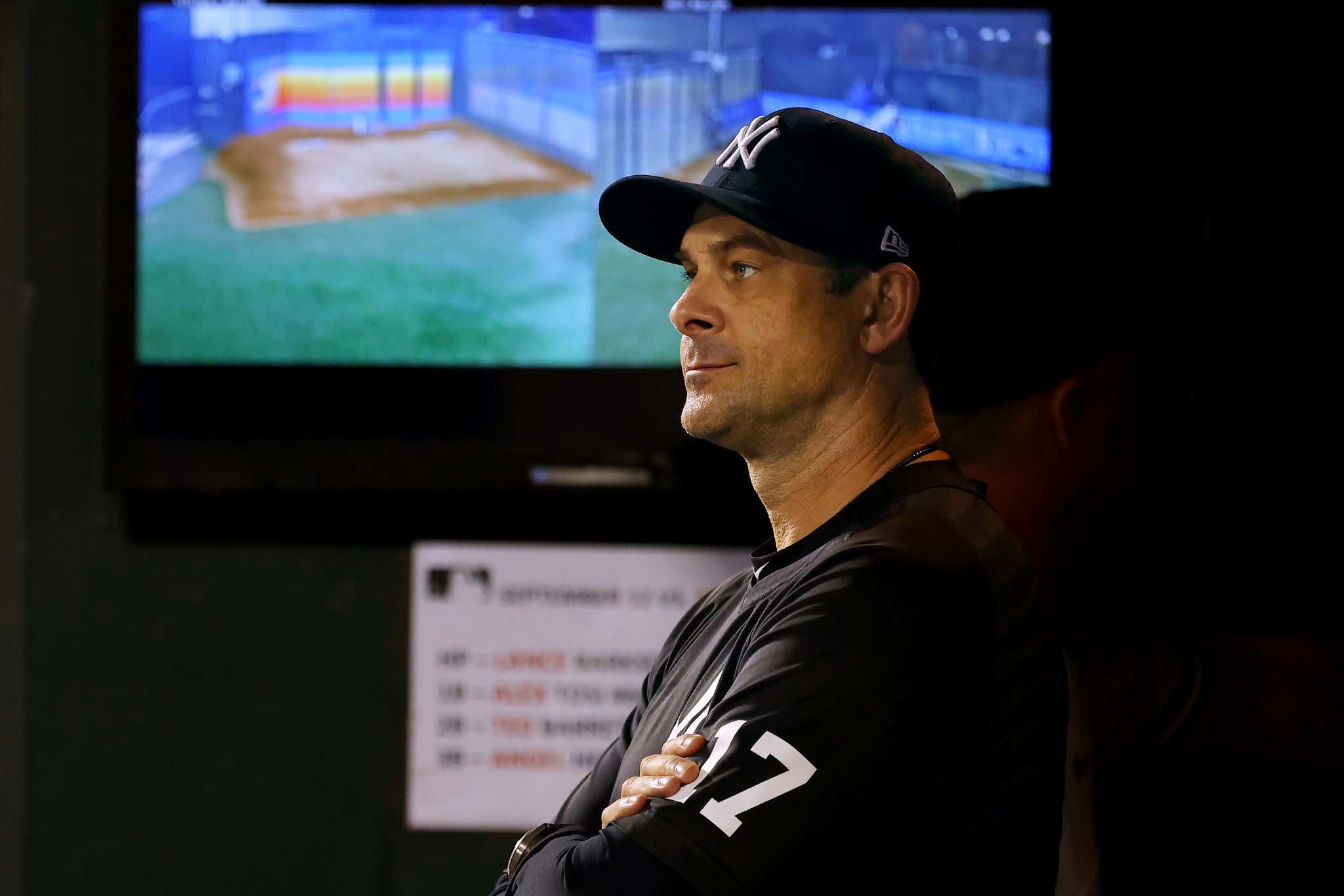 Though the wait continues within the Yankees' organization for owner Hal Steinbrenner to dictate the direction of the team in a fluid situation, he seems inclined to keep Aaron Boone as manager, industry sources told ESPN's Buster Olney.

"He likes [Boone], and I don't think he blames him for what happened," one source said.

During a season generally viewed as a disappointment, Steinbrenner cited underachieving player performance as the primary reason for the team's struggles. There also has been heavy social media criticism of Boone from some Yankees fans.

The Yankees season ended 8 days ago and everything has been quiet from the front office regarding Aaron Boone. When Joe Girardi was moved on from we knew almost immediately following their loss to the Astros in the 2017 ALCS. A few hours after the final out is recorded in this year's World Series Aaron Boone's contract will expire. It seems though, according to Buster Olney, that a contract extension is on the horizon. Our worst fears have arrived.

Now there are a faction of Yankee fans who think the manager means nothing and that none of the Yankees' incompetencies fall on Aaron Boone. They believe everything he does is from up top and followed by the book. To a degree that's true, but not entirely in my mind. I think the everyday lineup is out of his hands or at least he just follows whatever the computer spits out. Same goes for the starting rotation, sure. There are things however that he does control. For starters, how he portrays this team to the media and voices his reasoning for the everyday moves. Aaron Boone embarrasses the Yankees in this department. He's supposed to be the face of these decisions and when it comes down to it he falls flat on his face. The closed the gap quote should have been the final straw, but apparently not. One of the dumbest quotes I've ever seen in pro sports.

Here's him asked a simple question of whether Aaron Judge was hurt or not earlier in the season. It broke his brain.

Then there's the clichés. My fucking god the clichés. If he's back, I truly wonder what clichés he has left up his sleeve to throw out when the team can't get going by late May, June, July, etc. If I have to hear about how this team is this close to turning the corner again I'm gonna put my head through a wall. I cannot do it.

Another thing he fails miserably at is managing this bullpen. Throughout the course of the year I wanted to blow my brains out with his decisions navigating the pen. Something recent that comes to mind was the last weekend of the regular season when the Rays were blowing the doors off the Yankees on a Saturday in the Bronx. In the 6th inning of an 8-2 ball game Boone brought in one his best relievers in the 2nd half, Mike King. Keep in mind the Yankees planned to go with a full bullpen game the next day to clinch a spot in the Wild Card Game. King is a guy who with that extra day of rest could give you 2-3 excellent innings and help bridge the game to the later frames. Boone decided to use him in an 8-2 game and burned him for no reason. Afterwards he told the media that King would be unavailable for Sunday's contest. Remember when Zack Britton lost all the trust in himself and told Boone to not bring him in big spots anymore, and then Boone went to him the next day? It may seem like nothing to you, but it's those nonsensical decisions that he pulls all the fucking time. How we're allowing those to continue for next year and probably after that too is insane?

Another thing that falls on the manager and not the computer is base running. Simple fundamentals and discipline should be hammered home from a manager. The 2021 Yankees were one of the worst base running teams these eyes have ever witnessed. The mistakes never stopped. Despite Gary Sanchez's continued struggles behind the plate Boone would refuse to get on him. He was babied along with Gleyber while he was at short and that type of mindset became the norm in the clubhouse. Am I a hardo for wanting a manager who wants to get on his guys when they're struggling and making mistakes? They're adults, treat them like adults. This is shit a good manager does not allow.

The Aaron Boone defenders will tell you he's averaged 98 wins in his three full seasons as Yankees manager. Well, they've won one division title in that span and failed to reach the World Series each year. Who gives a fuck how many regular season wins you have if you get out-classed in October like clockwork?

When I say I want Aaron Boone gone people immediately ask who I want to replace him? I personally want an old veteran voice like a Buck Showalter or Bruce Bochy. People typically laugh at that suggestion, meanwhile those are two names at the top of the list currently for the San Diego Padres new vacancy. The White Sox brought in Tony LaRussa in the offseason and were laughed out of the building. Seemed to work out pretty good for them. The Astros brought in Dusty Baker. Feels like they're doing fine. Don't tell me a good manager can't help in this new era of baseball. A manager should have control and say for his team, not be some puppet. Brining in a veteran voice would show major change in on the horizon. Keeping Boone proves they think what they're doing is going to work. Doing the same thing over and over and expecting different results is the definition of insanity. That's what we're dealing with here.

Christ, I hate to say it out loud but look at the job Alex Cora has done in Boston. Dude's a fucking wizard and has changed their entire culture in one season. Those assholes traded Mookie Betts and got back to the ALCS before the Yankees did. If that alone is not enough right there to make major changes throughout the organization then it's obvious Hal Steinbrenner doesn't care enough. Bringing in a veteran voice like Buck or Bochy would show a major shift in thinking where Cashman/the computer aren't calling the shots for everything. Cora runs the show in Boston. Same with LaRussa in Chicago and Baker in Houston. Are there analytics involved? Of course and there should be, but there's got to be a good split. The philosophy has to change.

Bringing back Aaron Boone would show that the front office is pretty much planning on running back this team as it was in 2021. There isn't a complete overhaul on the horizon and it's on the players they have to play better. Fuck me Brett Gardner would probably be back somehow for his 50th season. Maybe they go hard for Corey Seager which I'd love. (realistically it'll be like Andrelton Simmons), but you need even more than that. I need more contact hitters across the board. I need a complete overhaul of the Yankees analytical team. The Yankees main numbers guy Michael Fishman has to be fired along with everyone he trusts. Brian Cashman should be on the hot seat but the Steinbrenner's treat him like family. He's entering the final year of his contract with them and I wouldn't be shocked if he's extended too. One title in 21 years great job dude, no WS appearances since 2009. Sick, here's a gold star. So yes, it's more than Boone no question, but Boone carries blame for sure and a new voice of that clubhouse is needed.

Just look at the Red Sox lineup and how it's constructed versus the Yankees. It's night and day more productive, especially in October. They retooled their entire team in two years while the Yankees hoped things would change for them because their numbers said they would. Now we have to watch them win the World Series again.

The Yankees have become a laughing stock in the sport and clearly don't have any urgency to make real changes. It's flat out embarrassing. Boston fans are begging the Yankees to bring back Boone. Begging. Wake the fuck up Hal.