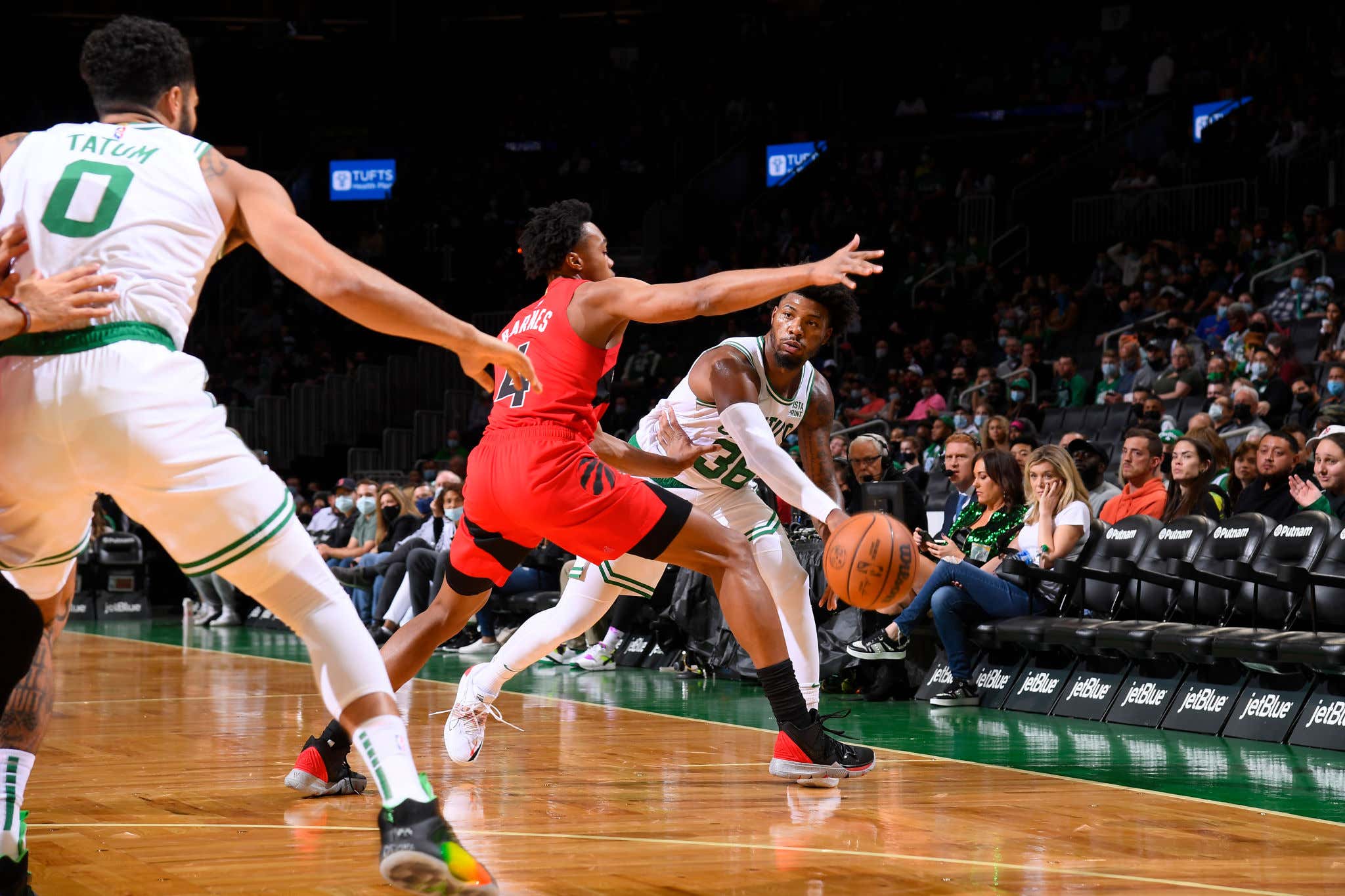 Once the preseason kicked off one of the things I was very interested in seeing was how Marcus Smart would perform in his newly defined role. For the first time in his Celtics career he's been given the keys to the car as this team's primary ballhandler/facilitator. In order for this idea to work, we'd have to see Smart adjust his playing style a little bit. Anyone who watches him play will tell you he's a completely different player when he defends and passes first. It's when guys were out last year that Smart found himself having to pick up the slack as a shooter/scorer, which is not his strength.

So now that guys are healthy and Smart has a clearly defined role, I was eager to see how his play adjusted. While these preseason games may not count in terms of the stats and the record, we are seeing signs of what might be on the horizon for a bunch of players, Smart included. I don't think it's a stretch to say that when it comes to Smart, we all want to see him pass up good shots for great shots, understand his role when playing next to the Jays, and give maximum effort at all times. Nothing crazy in terms of expectations, but something that's easy to talk about and then is completely different once the games started.

Here's the thing though. Through two preseason games, we're already seeing a change in Smart's mindset offensively. In fact, we got it on the very first bucket of the preseason

Make no mistake, 2020 Marcus Smart takes that three from the top of the arc. So right off the bat the fact that he recognized that play and immediately hit Tatum instead was exactly what I'm hoping to see from Smart. Pass up his good look for a great look from a better shooter.

Plays like this continue to happen with Smart so far. There was a play on Saturday night where he caught the ball in the corner and I was convinced he was going to take the corner three. Instead he passed it up and did this

Sure, the play didn't result in points, but that's not really what I'm looking at here. I'm looking at Smart's decision making. The reality is this is where Smart stands through 2 games

His preseason has basically looked exactly like what the Smart haters have begged him to do. Shoot less overall but especially from three and focus more on defense and passing. Even in a game on Saturday where both Brown and Schroder were out, we didn't see Smart force anything offensively. That's progress in my opinion. He only took 7 FGA and had 7 AST with just 2 3PA. Wouldn't you say that's clear evidence of him accepting this new role? If the preseason is a time to look for habits or areas of improvement for once the real games start, I'm not sure how anyone could watch Smart play so far and tell me that his shot selection and decision making looks to be better. Maybe that's due to him getting his extension and feeling comfortable/willing to accept this way of playing. Maybe it's Ime getting through to him and holding him accountable. To be honest I don't really care what the reason is, I'm just glad we're seeing these signs.

As someone who has been Team Smart since he arrived in Boston, this is the type of play I know he's capable of. We've seen him do it for stretches. What I want to see moving forward though is his ability to not fall back into his bad habits. I am also not someone who thinks Smart should never shoot. Those people are mad to be mad and ignore context. I have no problem with Smart taking open threes or using his size to get into the lane in big moments. It just has to be a balance.

There have been a lot of positives through the first two games. Whether that's how ready Tatum and Jaylen look, the double big lineup actually looking like it could work, Romeo's sudden development, Slim Grant somehow being a rotation caliber player, the list goes on and on. But of everything we've seen so far, I'm not sure there are more impactful developments than a revamped Marcus Smart shot selection/decision making.

He finally got what he's always asked for and his play looks exactly like what this team will need from him. If the preseason is where you plant the seeds in hopes that they bloom in a few months, this development from Smart could have a real impact on how this team ultimately performs. That's pretty exciting.