First off, everybody needs to see Stu in this-

How is it already week 5? Last week was a wild one with some shockers like the Jets pulling off a huge upset against Tennessee.

Another miserable 2-3 week last week has dropped the "Let The Boy Watch" wagon to 8-12. But week 5 things turn around.

This week features the highest over/under of the season when Patrick Mahomes and the Kansas City Chiefs host Josh Allen and the Buffalo Bills (56). Last week, the Chiefs covered for just the third time in their past 15 games, including the playoffs. Meanwhile, Buffalo has been the best team against the spread (ATS) since the start of last season, including having the top cover margin in 2021.

The weekend also features the lowest over/under of the season as the New England Patriots visit the Houston Texans (39). It's the first time a rookie quarterback (Mac Jones) is favored by at least eight points on the road since Ben Roethlisberger in 2004.

And as for the Overs Club? Not doing so hot.

As for the best and worst teams ATS

Let's get to the picks -

Stefanski is no dumb dumb so expect to see a ton of Chubb and Kareem Hunt in this one.

Cleveland’s coupling of a strong ground attack and a defense tied for second in sacks (14) means they can keep a team off the field, and force a lot of three and outs. Chargers quarterback Justin Herbert has shown he can keep pace with any team so far this season, but this defensive front will be a challenge for him. I think the kid has what it takes to step up and get rid of the ball quick enough to move the chains.

There's also the concern with the QB on the other side. The precise injury status of the torn labrum affecting the left (non-throwing) shoulder of Cleveland QB Baker Mayfield remains super critical. Case Keenum is the Browns’ secondary option under center and if he's forced to come in then you can pretty much call it a wrap.

I like the Chargers at home in this one. 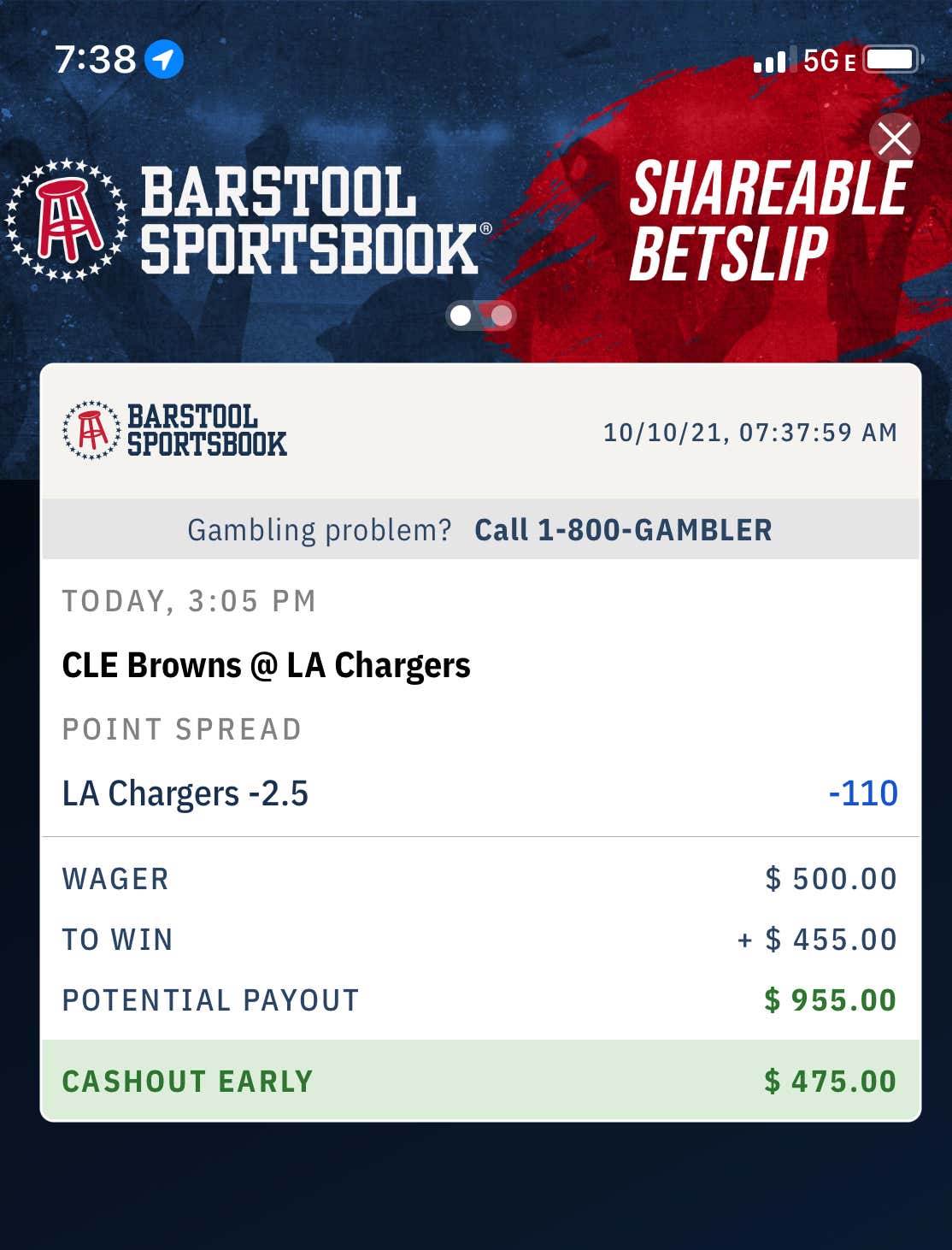 Last year, both meetings between these two conference rivals were won by the road underdog (both were at least six-point underdogs).

This matchup sees a rookie QB, Trey Lance, stepping in to fill Pretty Jimmy's shoes, on the road against a pretty legit defense. And an extraordinary offense that leads the N.F.L. with 35 points per game and last week carved up the Rams’ defense. I think Trey Lance is a stud but he can't go shot for shot with Kyler Murray and this offense.

My only suggestion here is buy the hook, I can see this one ending 28-23. 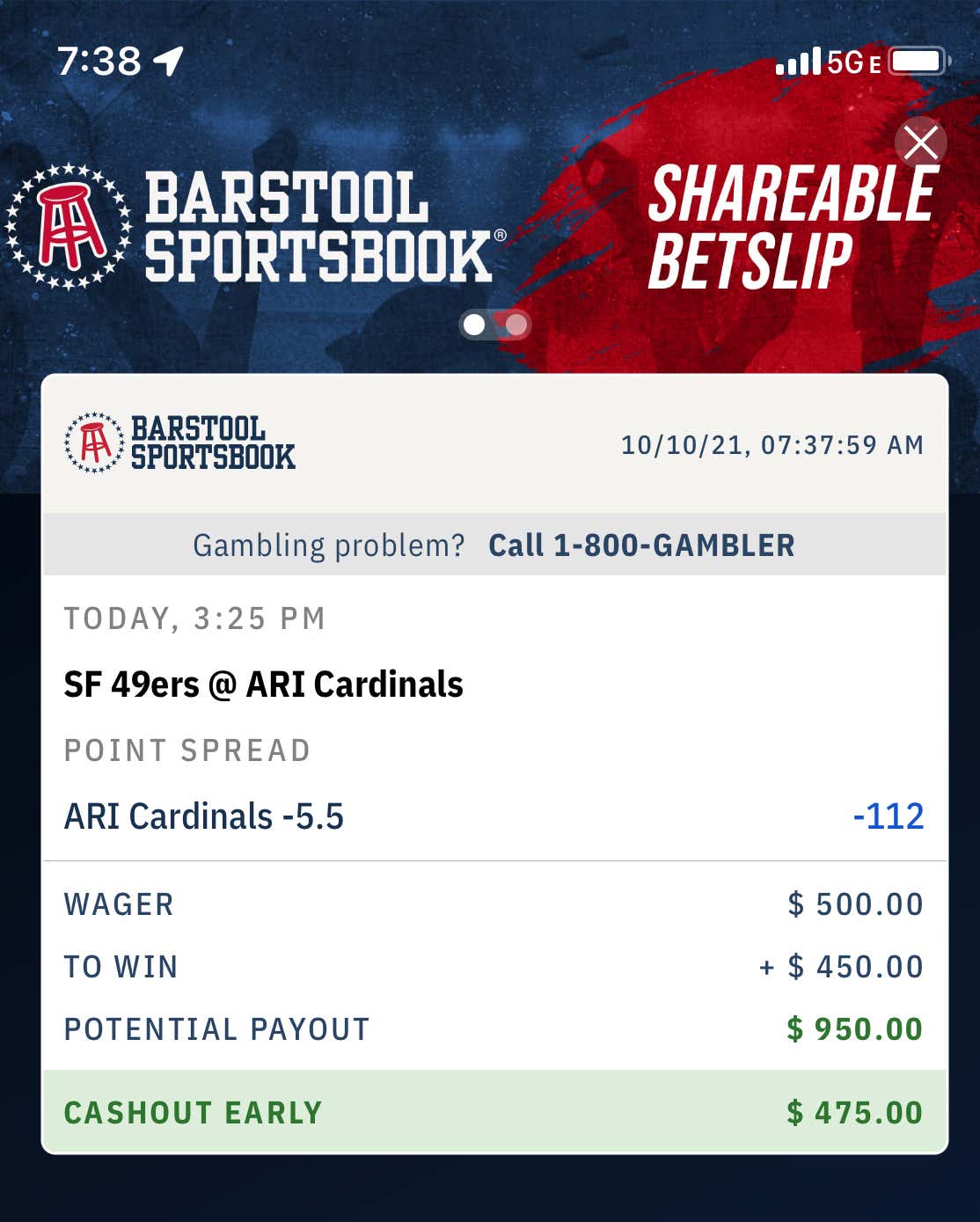 This one is a rematch of last season's AFC Championship Game. Buffalo enters with the best points differential in the NFL at plus-90. The Bills' shutout victories over Houston and Miami were against backup quarterbacks. The step-up in class against the Chiefs and Patrick Mahomes will make a big difference.

The Bills' defense has looked great this season but it hasn't faced a quarterback of Patrick Mahomes' caliber, home or away. The Chiefs have found a balanced offense and the big pass plays are flowing again to Tyreek Hill as teams continue to pick their poison between him and Travis Kelce. Mahomes didn't like being under .500 and doesn't want to be there again. The Bills' offense also will cause plenty of problems for the Chiefs' defense with Josh Allen playing well and spreading the ball around.

The Chiefs are giving up a league-worst 6.9 yards per play. Buffalo ranks first at 4.0 yards per play allowed. The Bills bolstered their pass rush in the offseason and we're seeing the results: They're second in pressure rate. As mentioned above, road underdogs of six or fewer points are 18-6 ATS (75 percent) this season. This is a game the Bills have had circled all offseason. Take the points in this AFC Championship Game rematch, but don't be surprised by an outright upset. 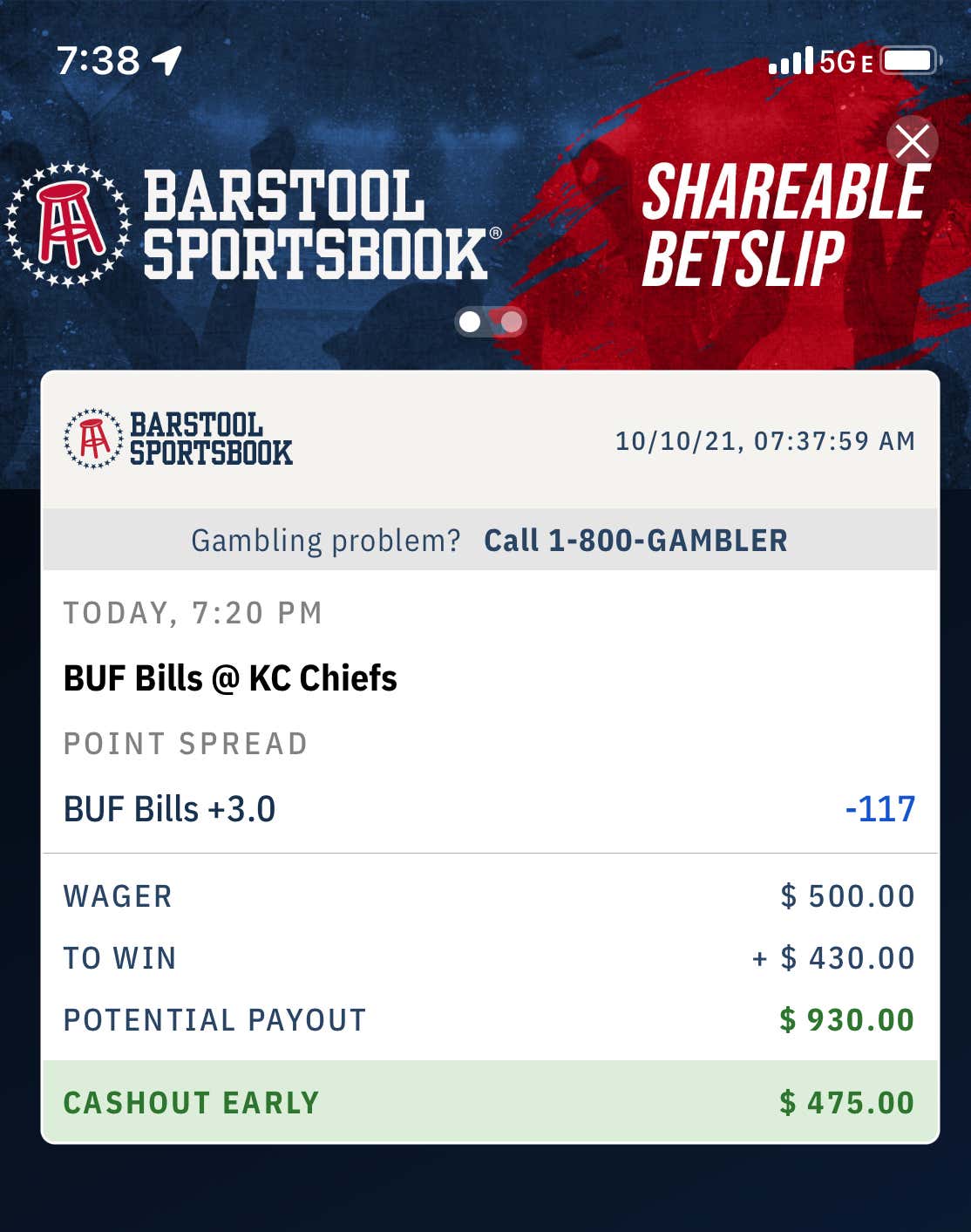 Also- we have a great promo going for this game.

The Panthers suffered their first loss last week, but after two straight on the road they return to face an Eagles team that is 1-3. Philadelphia did some good things on offense against the Chiefs, but the defense had issues. Carolina's defense is coming off a tough game at Dallas, but I think they regroup here.

Even before the news that Christian McCaffrey (hamstring) practiced on a limited basis Wednesday, I liked Carolina. The Panthers faced a very legit offense that many, including myself, underestimated Sunday in Dallas, but they should have a lot more success at home against the reeling Eagles. Carolina was utterly dominant defensively in its first two home games versus the Jets and Saints. And they are up against a defense that can't figure it out yet. This Eagles defense allowed Kansas City receiver Tyreek Hill to score three touchdowns last week and that is tied for the sixth-most passing touchdowns allowed (9). Lay the points in this one. 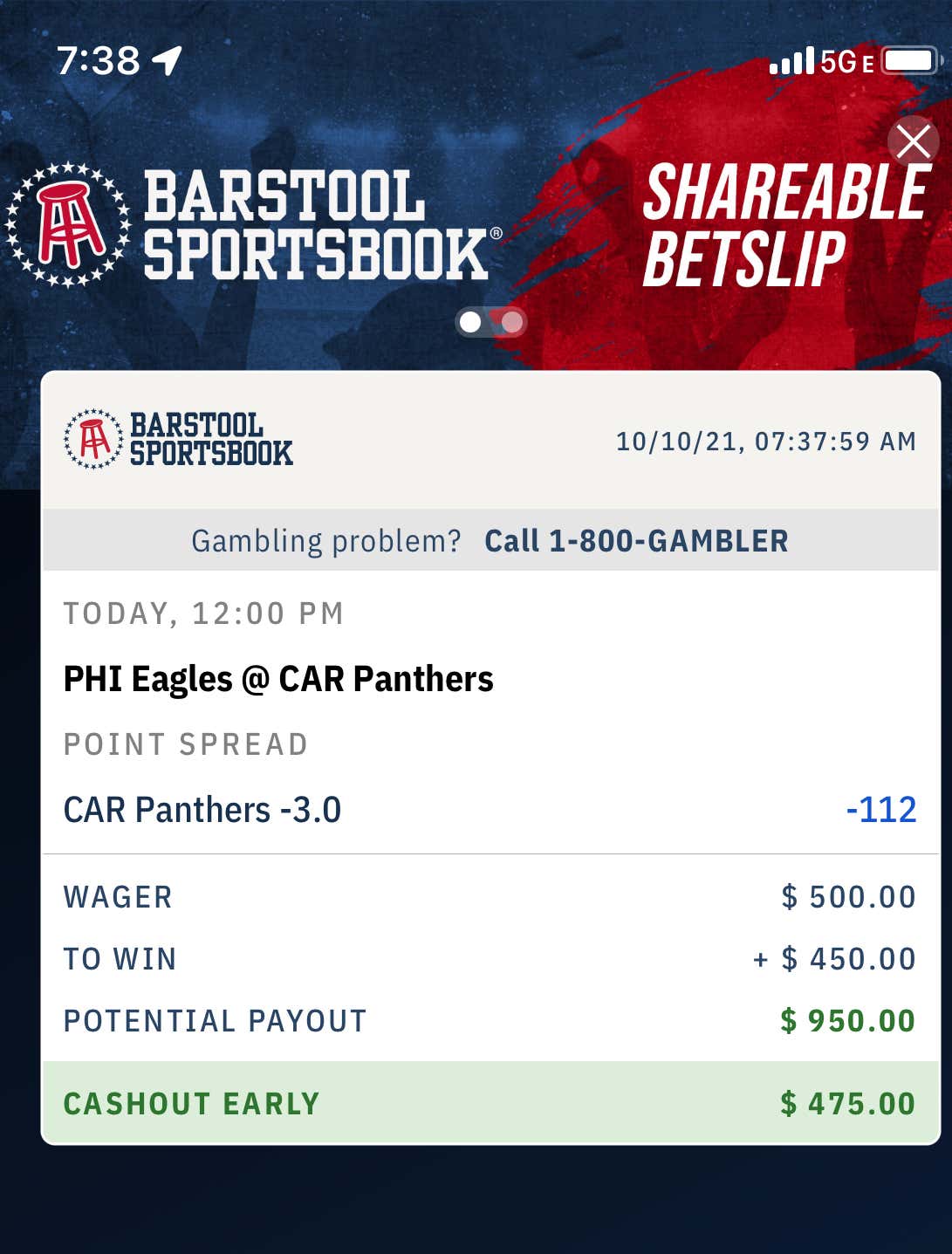 The Saints might be the leagues biggest mystery so far. Playing up or down to the competition while waiting for the return of starters like receiver Michael Thomas and defensive tackle David Onyemata.

Washington has serious problems in their secondary and a big projected injury report after nine players were knocked out of their 34-30 win over Atlanta.

Sean Payton will have his squad regrouped after a loss and I think they take care of business easily in this one. 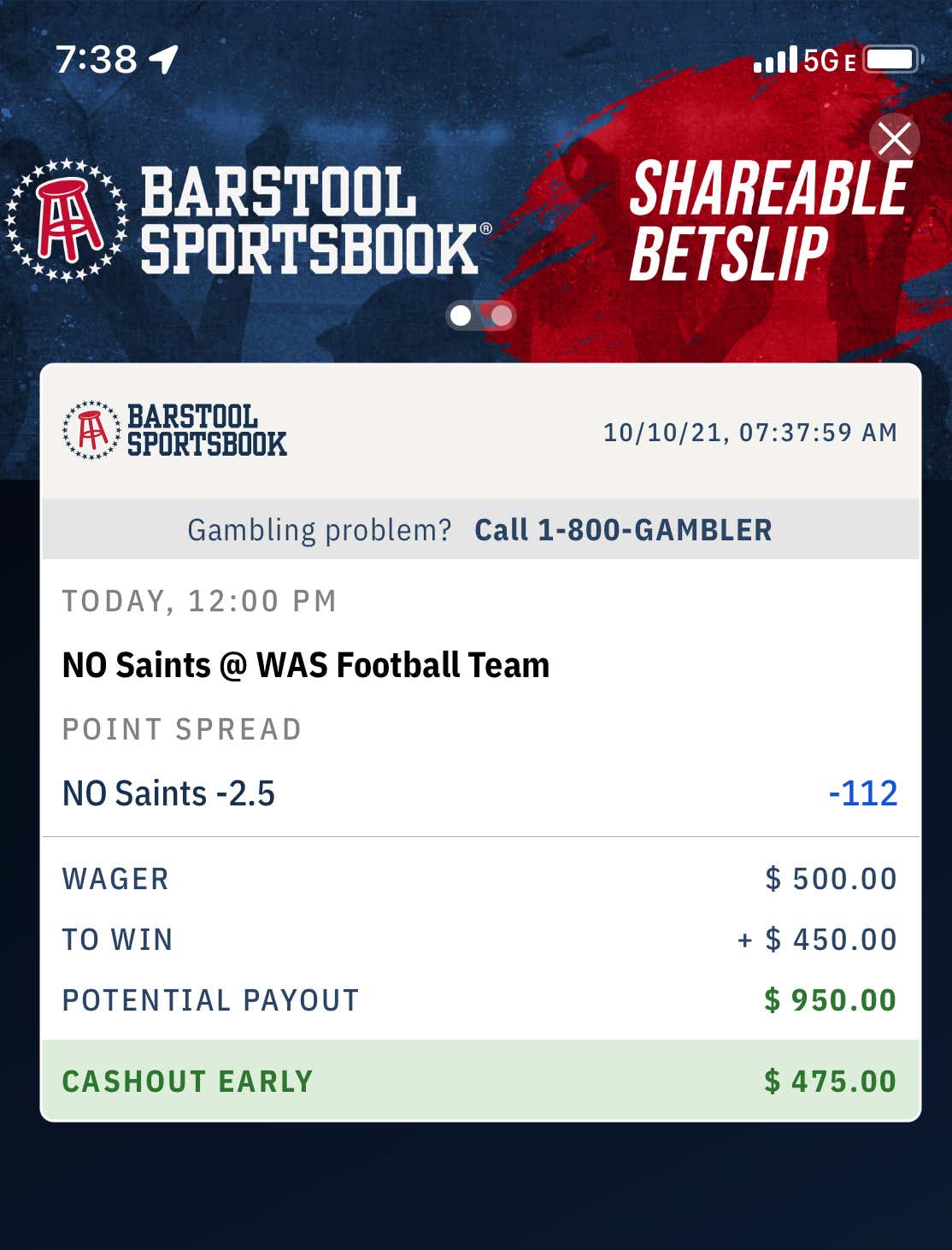 And if you think these picks are dogshit then I suggest tailing Megan Makin Money. She's been on fire