There is a Change.org petition making the rounds in Ontario, Canada titled, "Eden High School Principal, Sharon Burns, Needs To Be Transferred Immediately!"

And what exactly is the dastardly deed that Burns committed leading to nearly 450 people signing the writing on this wall so far? Her love of Iron Maiden, of course and…

Er, wait, they've updated it… It's not about Iron Maiden, it's about her love of Satan (via Iron Maiden) as shown on screenshots of a (now deleted) post on the Eden Principal Instagram page. #GetTheWholeStory. 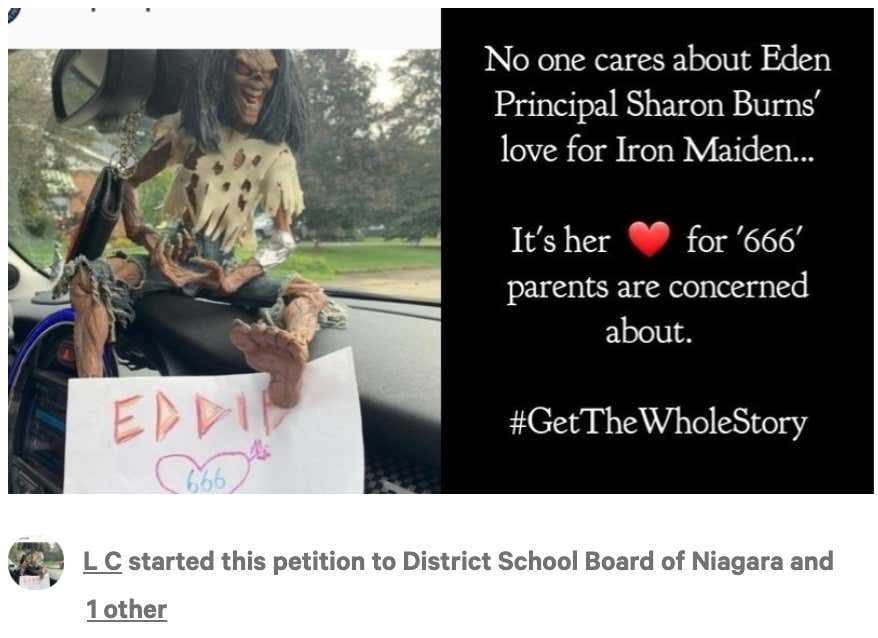 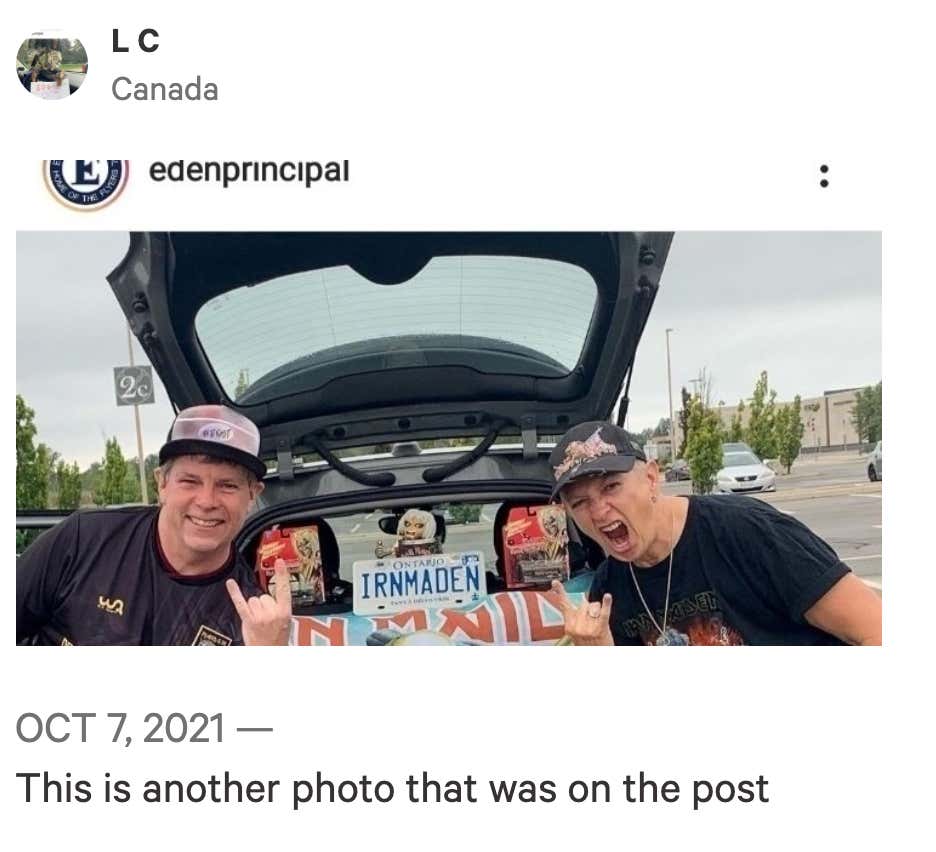 Here's the statement from petition creator "L C" who, according to the comments, is a 'Debbi Lynn', which I'm guessing is Canadian for 'Karen':

Please Note:  This petition is NOT about Sharon Burns’ love for Iron Maiden. At NO POINT has it ever been. This petition is about a principal of a school openly displaying her OWN handmade sign with the 666 clearly displayed on it which she knows full well what that SATANIC SYMBOL means to the vast majority of families in her school AND she put it on a PROFESSIONAL, public @edenprincipal account on social media, NOT A PRIVATE ONE, which she very easily could have done.

If she had not posted a picture of her own handmade 666 sign, this petition WOULD NOT EXIST. Nobody cares what band she likes and this is not about her choice in what she listens to. That would be petty and nonsensical. This is ONLY about openly choosing to display Satanic symbols on a PROFESSIONAL profile page. As all communities and schools are supposed to be about kindness, EQUITY and INCLUSION, this displaying of Satanic symbols is mocking and isolating large segments of the community she works in and clearly is not upholding any of those values.

Sharon knows full well what she did was simply inappropriate, unnecessary and not professional but has yet to publicly admit so and is willing to allow people to believe a completely different story, making very real concerns seem petty, is allowing the start of another petition that clearly misleads people to believe it’s about attacking her choice of a band or music and is not clearing up any of this misunderstanding created by the other petition and a misleading news story. If CKTB understood they were mislead about the real concerns, (lack of professionalism, lack of equity and inclusion and openly mocking community beliefs with a handmade 666 sign on a public, PROFESSIONAL social media profile), we can’t imagine they would be interested in continuing to publish the news story.

Here is the petition details: As concerned parents with impressionable children at Eden High School in St. Catharines, Ontario, we are deeply disturbed that the principal assigned to the school blatantly showed Satanic symbols and her allegiance to Satanic practices on her public social media platforms where all the students can see them under @edenprincipal (not her personal account). Our school is based on inclusion, and openly displaying Satanic symbols (on a public social media platform) that directly goes against the principles of the vast majority of families who represent the school, is not inclusive. As parents we are demanding her transfer to another school. Please replace her with another principal who aligns with the values of the families at Eden and will not sabotage the teaching or upholding of those values and will not try to introduce impressionable students to Satanic practices or symbolism.

Will provide more pictures if you have more questions. We could only put one picture in this campaign.

First off, I could at least understand the fuss if this were some big religious school, but it's a public school. Second, I'm not exactly sure what the context was for the principal sharing those on that account, but there's a bunch of other 'get to know the staff' posts so maybe that was it. Otherwise, I do think it was a weird choice, but not write-an-angry-novel-on-change.org weird. Plus, the 666/devil horns stuff is only a nod to the band who have also explained all that. Third, Ts&Ps to whoever this L C person's child is at that school because I bet they are straight up not having a good time both at home and in the classroom.

Speaking of the classroom, the kids at the school are fighting back with a petition of their own titled, "We Need Mrs. Burns" and it has over 12,700 signatures.

In closing, the entire time I worked on this blog I couldn't stop repeating that Wheatus line from Teenage Dirtbag, which will now be stuck in my head the remainder of the weekend. Also, I guess I just feel defensive of the band since I've been listening to them so much lately. 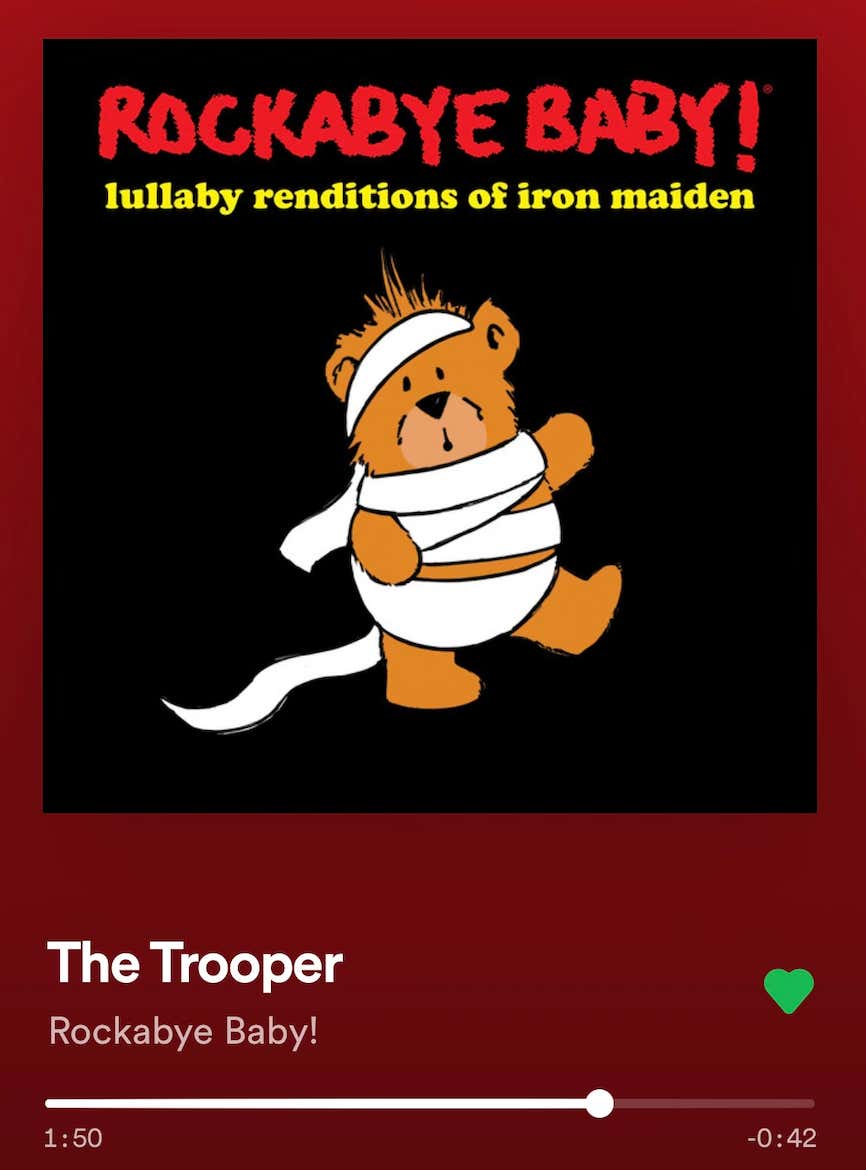