Kurtwood Smith and Debra Jo Rupp, who played parents Red and Kitty Forman in the original series, are set to return in “That ’90s Show.” Netflix has ordered 10 episodes of the show, which will be a multi-cam sitcom like the original.

In the new series, it’s 1995 and Leia Forman, daughter of Eric and Donna, is visiting her grandparents for the summer where she bonds with a new generation of Point Place, WI, kids under the watchful eye of Kitty and the stern glare of Red.

That 70s show was a staple of my childhood because it was something that both me, my brothers and my parents could watch and enjoy at different levels. My dad would laugh at Red, saying he's the best and just like his dad growing up. My mom loved Donna cause that was more like her in the 70s. And me and my brothers would basically just laugh at Fez. I'm assuming that the play is essentially the same here. There is a new generation of people with young kids that spent their teens in the 90s, and want to have that same shared experience. The big warning sign to me, though, is that they already tried this and failed with 'That 80's Show'. 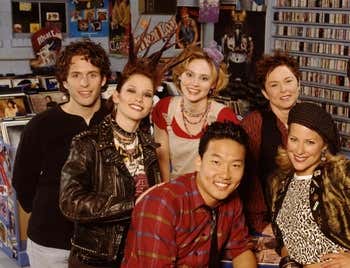 It starred Glenn Howerton, who we now love from 'It's Always Sunny in Philadelphia' and a bunch of other randos. The show was universally panned and it was cancelled after a season. It's been said that the issue was that the cast of that show was just too old for the target demo compared to the teenaged one of 'That '70s Show'. The good thing for this show is that I don't think that is the case. Netflix is likely targeting the 30-40 year old demo, which obviously grew up in the 90s and also likely has nostalgia for 'That '70s show' as well. Combining that with the fact that this show will obviously have connective tissue to the original series (That '80s show did not), is probably a smart play.

I'll say this: I love both Kurtwood Smith and Debra Jo Rupp. Smith is widely underappreciated for his talents, and I loved what he did recently in 'Patriot'. Seeing DJR(I'm inventing this acronym for her) in WandaVision was so awesome because she was America's TV mom for a decent while! So I'm happy to see them back on screen together, but I just don't think this will be good. I think it will be closer to the last Netflix 90s revival, 'Fuller House' which was fucking terrible.