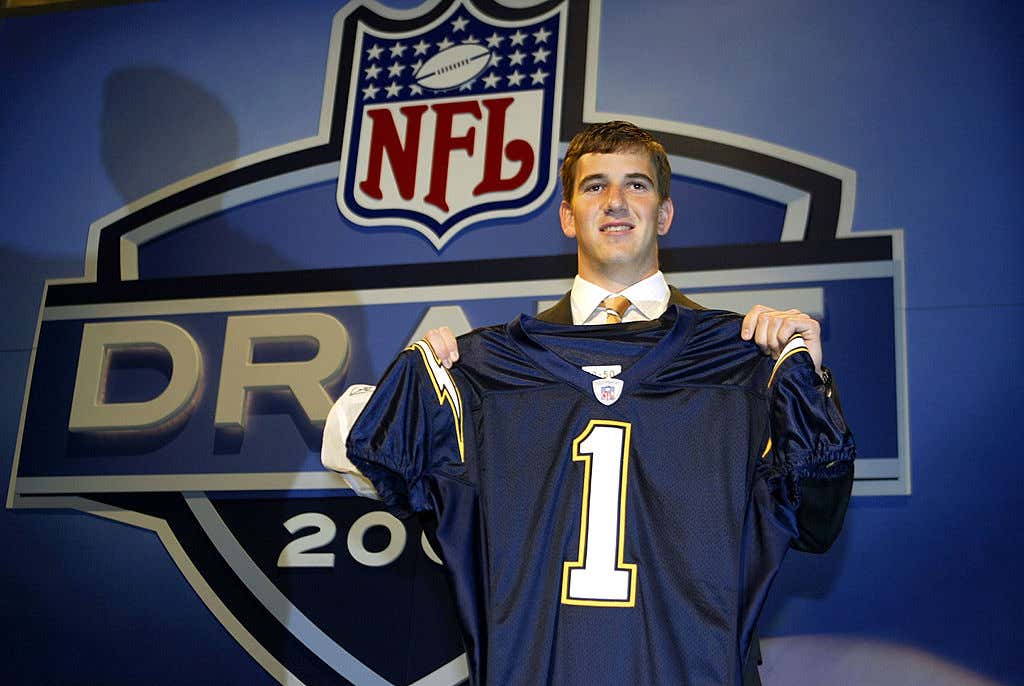 CBS- It's been 17 years since the Chargers made Eli Manning the No. 1 overall pick in the 2004 NFL Draft, and to this day, the two-time Super Bowl winner has never really explained why he didn't want to play for them, but that changed this week. During an interview on the "10 Questions with Kyle Brandt" podcast, Eli finally revealed why he refused to play for the Chargers, who were then located in San Diego.

"It was my decision having talked with my agent, coaches, [general managers] and owners," Manning said. "Going through the draft process, I was just worried about the Chargers organization at the time. I felt it was the right decision and I had a little pull. I quietly tried to say 'Hey, please don't draft me, it can be our secret,' and they didn't keep the secret part very well.""

"It wasn't my Dad. He was trying to take the heat off of me, he knew I was going to get criticized," Eli Manning told Brandt.

Wait, did people actually think that the entire reason Eli landed with the Giants was because Archie wanted him there in his grand scheme to take over the NFL followed by the world? Don't get me wrong, I'm sure the Mannings weren't unhappy that a franchise with the history and market of the Giants were the team that showed the most interest in Eli because of all the ad deals as well as notoriety that comes with playing professional sports in New York (not to mention defeating the greatest coach, quarterback, and football dynasty any of us will ever see. Twice) that has led to him being a part of the most electrifying broadcast in sports today.

But I figured anybody with a brain realized that the Chargers franchise was viewed as football poison and the Mannings had the money as well as political pigskin power to get him out of there. Plus Eli strikes me as a big time secret guy where if you tell anybody his secret, you are an enemy in his eyes for life.

I guarantee Eli still does circle circle dot dot now I have a cooties shot before talking to any girls, including his wife sweet Abby

You can't tell me that Easy Eli Manning wouldn't have enjoyed throwing occasional spirals in 75 degree weather in front of a half full stadium of fans that kinda cared instead of in front of a sold out stadium filled with swirling winds, lunatic fans, and the toughest media in the country. Something tells me this guy would've liked taking a stroll on the beach in relative anonymity an hour after his football game every week instead of waiting in gridlock to get back to Hoboken.

The only time you would hear about the Chargers back in 2004 is when there people talked about how nobody cared about their home games or how awful their ownership group was. Since that draft, the team played in front of half empty crowds, fought with the city of San Diego over a new stadium, then had poor Boltman begging for his beloved Chargers to stay in town.

Fast forward 17 years and the Chargers have moved to a new city where they are the second class citizens in their own stadium, seem to be cursed by the field goal gods as well as the injury gods, and are still owned by the same family.

I hate to say it Chargers fans, but I think it's clear that #EliWasRight.