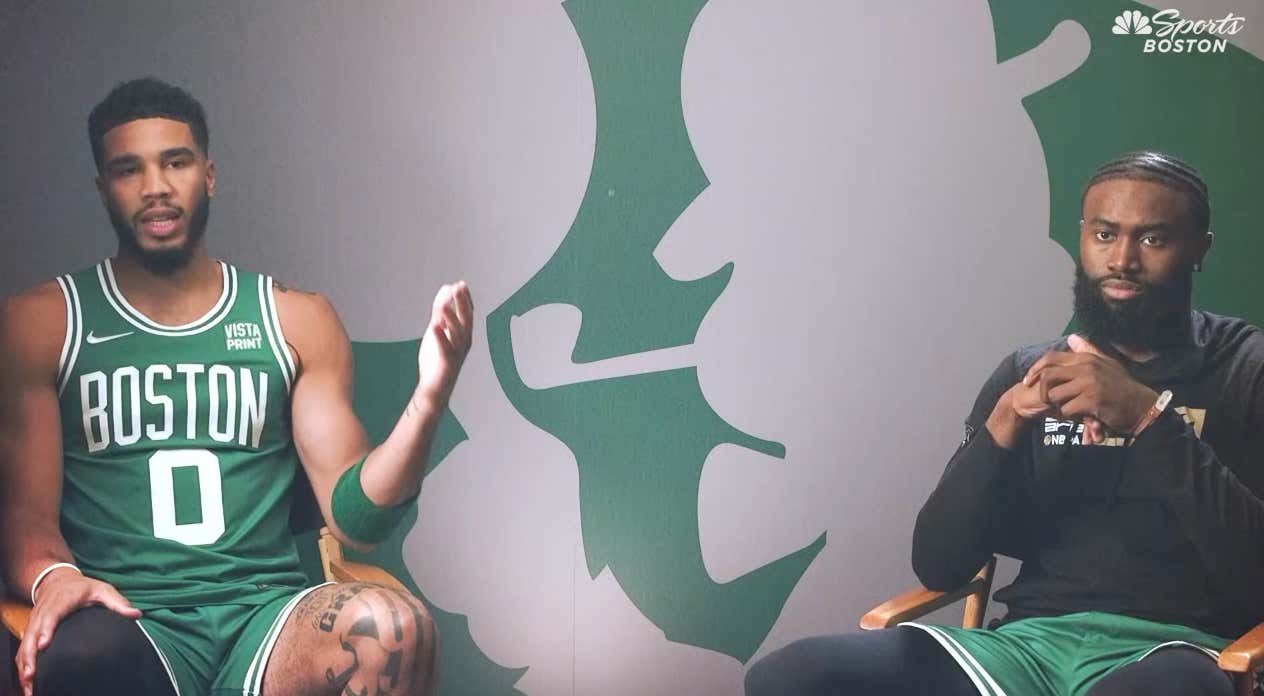 First are foremost, thank you Chris Forsberg for this. For some unknown reason we've all had to find ways to survive the insane break between preseason games. Having a thriller on Monday night and then not being able to see this team play again until Saturday night has been torture. Fortunately, Forsberg came through with the goods

What a tremendous video. Somewhere, the haters out there are slamming their desks with frustration. You see, this weird narrative that existed last year that these two weren't friends and you needed to split them up was a main talking point. Despite there being no actual evidence of that, people took it and ran with it. They heard it on sports talk radio and considered it fact. Jaylen first addressed this take at media day

and it was great to see both of them on camera address it again, this time together. I always found it very weird that in a sport where every team in the league is on the quest to find two franchise cornerstone players, that there was this obsession that Tatum/Brown don't work and this weird attempt to try and create a divide between the two. Instead, maybe be appreciative that the Celts actually nailed these picks? That both are young guys who are continuing to get better and better and have done nothing but support one another? Not once have we heard them care about who is Batman or who is Robin. Who gets the ball at the end of games, any of that shit. That's pretty rare in the NBA when you're talking about the elite talent.

But you see, positive shit doesn't play. You get called a "homer" or a "green teamer" if you think that maybe these two actually like each other and like playing together. No no, what plays is saying they actually don't hang out off the court and aren't friends, so you're better off splitting them up for say….Bradley Beal who is lifelong friends with Tatum. It is very silly that this is even something the Jays need to be asked about, but that's how things go. I don't think it's an accident that in a year where the Celts underachieved, those narratives started to come out, yet in every other season where the Celts were successful we never heard a peep. Funny how that works.

I'm just not sure what people want. They thrive playing next to each other on the floor, they root for one another, they celebrate the other's success

it's literally everything you could want from your two young franchise guys. I'm just happy we can put this shit to bed and focus on what actually matters. The basketball stuff. There's a whole lot more you can talk about than this weird idea that Tatum and Brown aren't friends or don't hang out. The easiest way to prevent all that noise is to simply win basketball games. That's the challenge this year. Whether or not the Celts will be able to prove that last year was actually the exception and not the rule will depend on what versions of Tatum/Jaylen we get. From the look of things Monday, they look ready to roll.