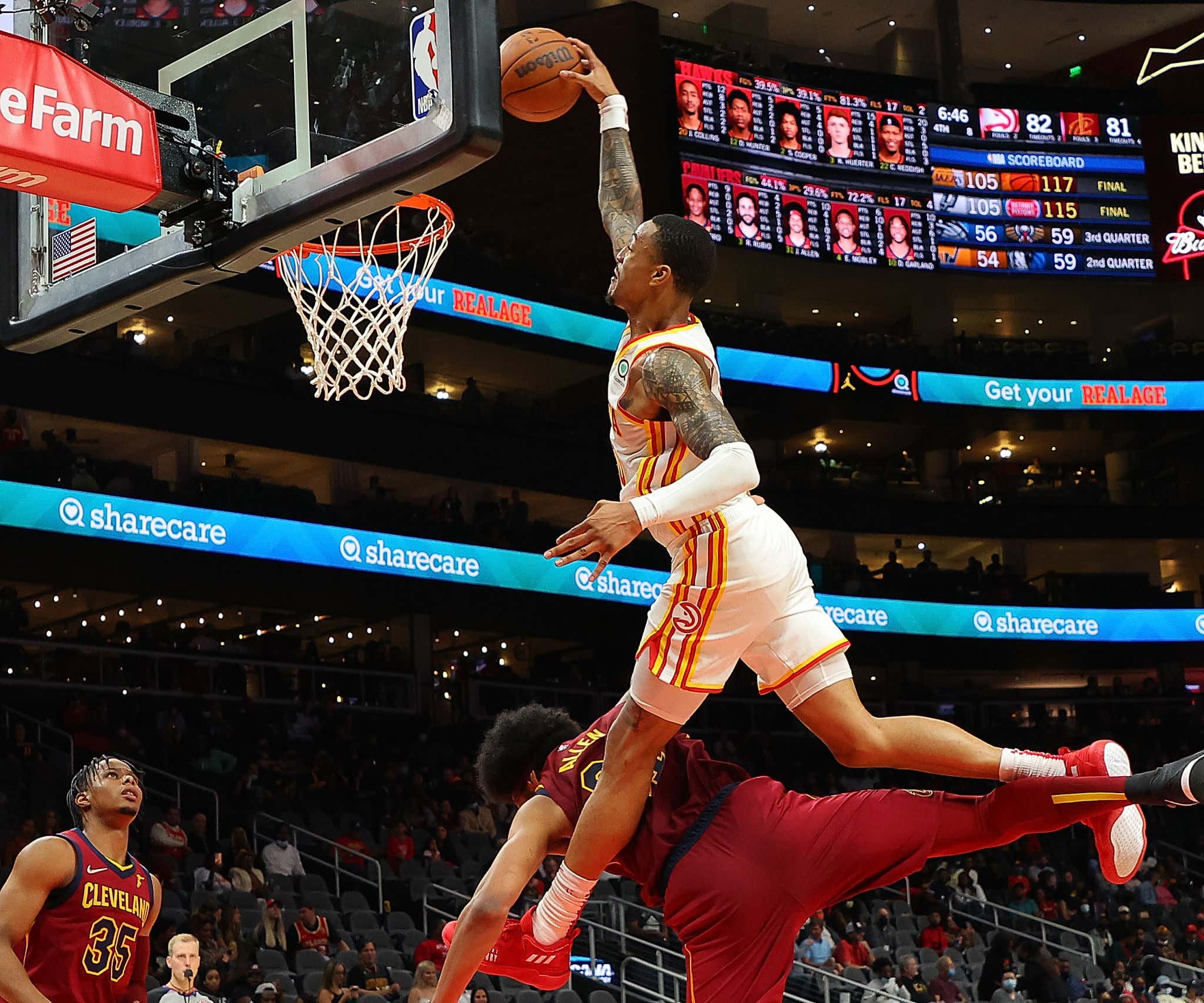 I've been telling you all week that you need to be watching preseason basketball. It's awesome. Sure it doesn't mean a whole lot in the grand scheme of the season because the games are fake, but they are entertaining as hell. I'm of the belief that having basketball on my television will always be better than not having it no matter what stage of the season we're in. You never know when you're going to see something crazy, and last night was yet another example. May I introduce to you the latest John Collins poster

Jesus fucking christ. In case you weren't aware, Jarrett Allen is 6'11. The second I saw that dunk my brain immediately transported to another insane John Collins poster. You know the one I'm talking about

I'm getting close and closer to declaring that John Collins is on the short list of the best lob catchers in the league. The dude is 6'9 and routinely throws it down on the heads of 7 footers. I mean just look at that picture of him dunking on Allen. Maybe you were someone who was a little iffy about the 5/125M extension (last year player option) that the Hawks gave Collins this summer. Well a play like that should help calm those nerves. As long as his defense continues to improve, John Collins is going to be a stud. I truly believe that. He can score a wide variety of ways, is a career 56/38% shooter, hits the glass well, protects the rim, and he's only 23 years old. It's a big part of why the Hawks were voted by that GM survey of having the best young core in the league. You see plays like that, and it makes sense.

Let's talk about the Hawks quickly if you don't mind. There's no denying that once they fired their coach and gave Nate McMillan the job which coincided with Bogdan Bogdanovic returning from injury in the beginning of March, the Hawks were one of the best teams in the East if not the league. They finished the year on a 27-11 run which was tied for the 2nd best record in the entire NBA. They then entered the playoffs as a 5 seed and took down the 1 seed to make their first ECF since 2014. There was no fluke in how they did that either. Had Trae Young not gotten hurt, who knows what happens against the Bucks. There are plenty of reasons to be excited as a Hawks fan and have lofty expectations heading into this year.

But here's the thing. They enter the season as the hunted and not the hunter. There are a few teams in the league that face this same challenge of backing up last season's success when you aren't sneaking up on anyone this year. Not every team is able to do that. Nobody is going to say "oh whatever this is an easy game, it's the Hawks" like maybe you could in previous years. They are going to get everyone's best effort because there's a lot of hype surrounding this team heading into the season. You could tell me this Hawks team will finish anywhere from the 3 seed to the 6 seed and I'd believe you. Outside of the top 2 teams (MIL/BKN), it's a clusterfuck in the East as we enter the year. What happens with Philly? Do the Heat/Celtics respond after weird injury/covid years and get back to contention? Are the Knicks able to build on their encouraging 2020 season the same way the Hawks will have to? What about the Bulls after their big offseason? The list goes on and on.

That's why the continued development of someone like John Collins is so important to the Hawks success. He might not be an All Star because that's mostly a popularity contest, but I see no reason why he can't put up All Star caliber production. Is it crazy to suggest he can get back to being the 20/10 guy we saw in 2019? I don't think so. Especially if he's going to continue to dunk on everyone like this.