Large asked for a review so he's getting a review.

Out of pure respect, I have no choice but to take it to the blog. 280 characters to opine on a Large-related food item is a slap in the face to a notably distinguished modern American gentleman. Much less one that comfortably identifies with a steeply priced Cabernet Sauvignon on the wine list. It should go without saying, but this is not a task I take lightly. He deserves my best effort so let's give it to him. 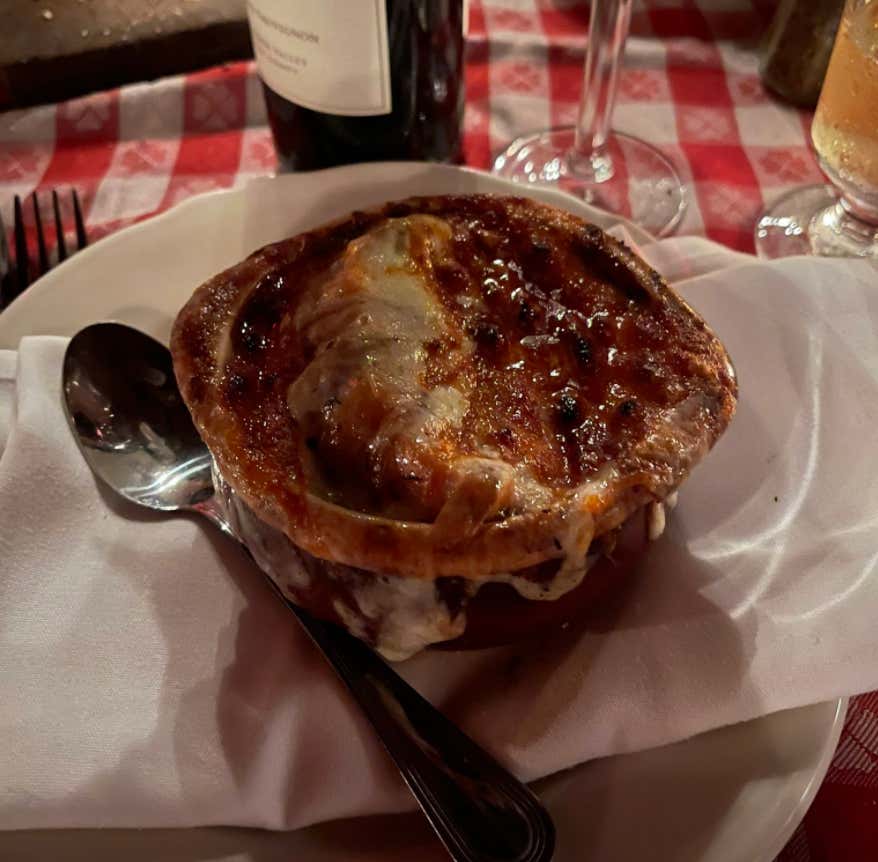 - I love the tablecloth. Red and white squares is the quickest way to my heart in a fine dining atmosphere. It's a subtle nod to the mix of sophistication and comfort. You know the service is top notch along with all the intangibles that come with a sit down meal. Maybe not a crumb sweeper standing at the ready. But there's soft music accompanying dim lighting that makes for a naturally intimate experience. Before I even see a bowl of French Onion, you know this place is legit.

- It's a crowded table, which means seating is tight and that's because this is a Real McCoy establishment. I see a beer (Peroni maybe?) in a unique tall glass. Hardly one square over is a glass of wine abutting the freshly opened bottle of cab while salt & pepper shakers huddle close by. The proximity of these items tells me that real estate comes at a premium which further emphasizes my point that this restaurant is in high demand - on a Wednesday night no less. I haven't said a word about the French Onion and I already know it's going to arouse my senses.

- I don't love the spoon. I'll be honest. I think a dedicated soup spoon is always a nice touch, but working against my analysis is the practicality of said soup spoon vs. a traditionally more pointed utensil. 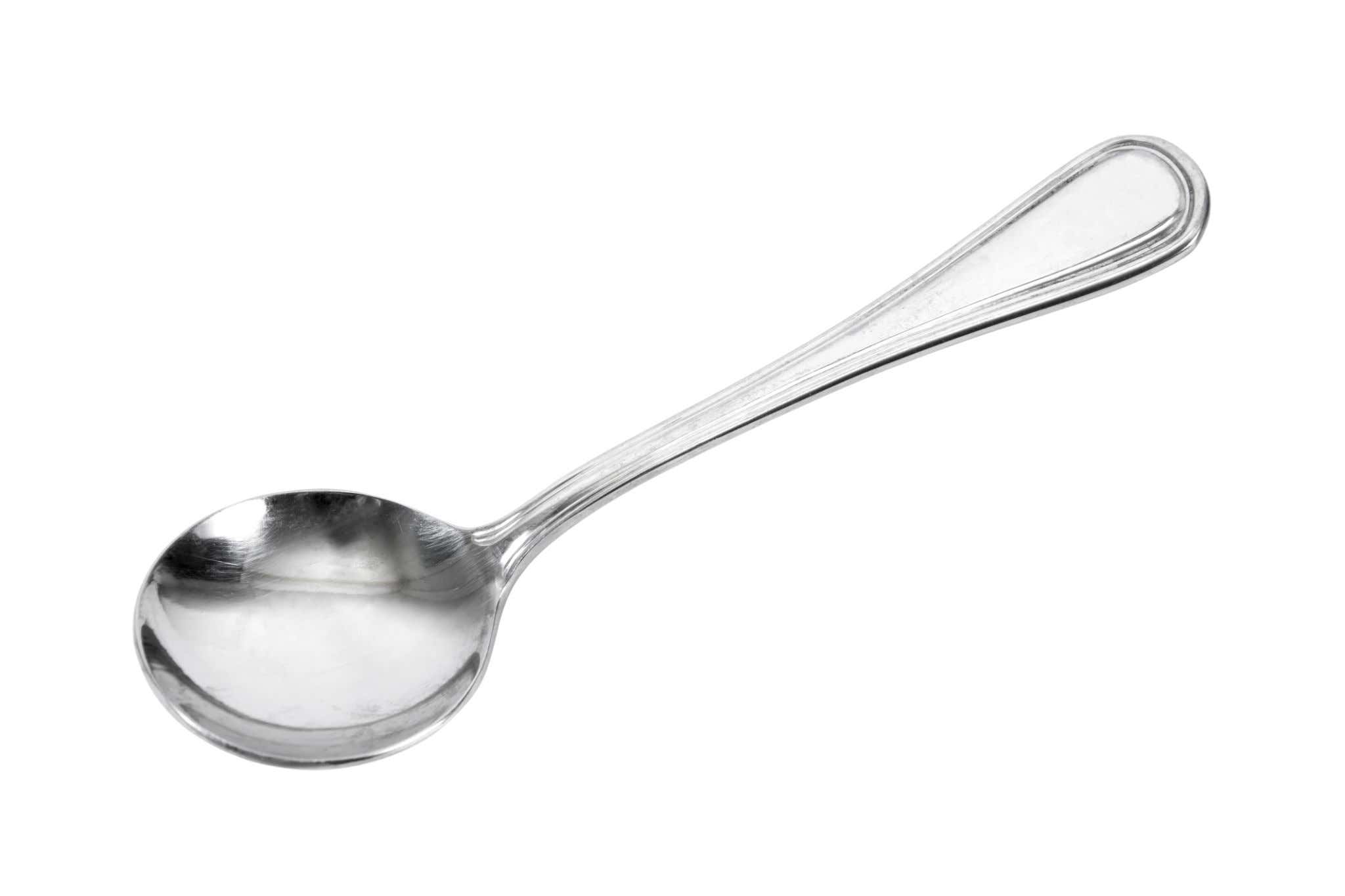 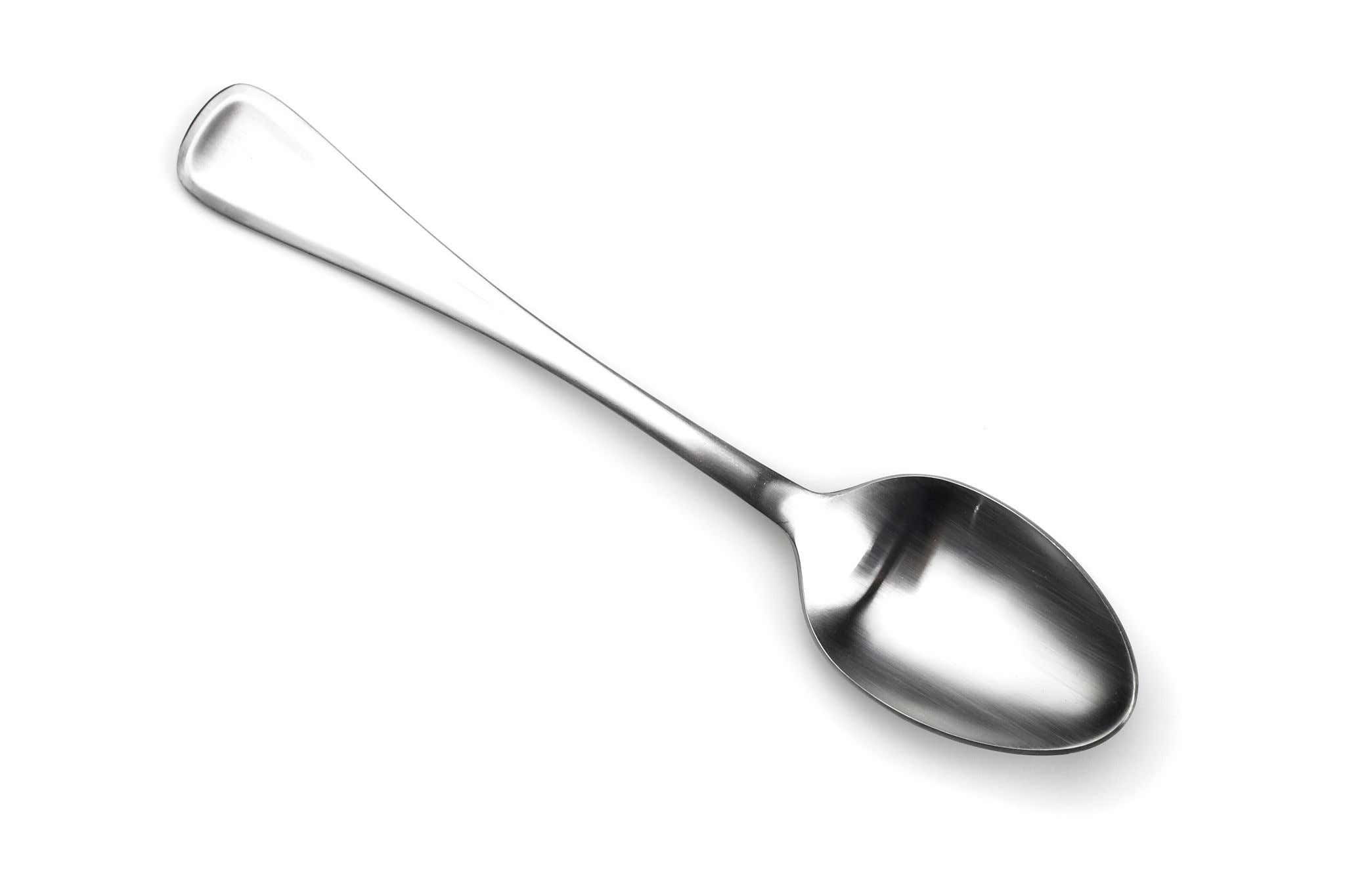 - In a perfect world, you assume this type of restaurant intentionally gives you the traditional spoon to better navigate the interaction of molten cheese with the soup. You can get in and out of the bowl easier, even if you sacrifice ladle strength and effectiveness. You're getting less soup but a potentially higher quality of bite. This is something I want to penalize, but with reflection comes understanding. It could be on purpose and that would improve the score. But it could just as easily be a mistake that works against the number. Given the uncertainty, I've ultimately decided to be neutral about the spoon.

Alexa show me the soup again:

With that in mind, some pointed observations on the soup itself:

- I like a bigger bowl and a lot of that has to do with price point. Name alone means you're paying a premium. They'll give you a minestrone equivalent for $7.99. Then maybe a de jour for $8.99 or a seafood bisque at market price. You'll see some options before noticing the last soup listed is a daily baked french onion. It will be priced $12.99 without any discernible reason for the markup. Just that it's a daily baked soup and it costs a lot more than the stated offerings. You'll naturally expect a bigger bowl but sometimes it just doesn't come. They're essentially telling you the quality is that much stronger than the alternative soups. This is definitely one of those restaurants and that's not a bad thing. You just have to know up front that you can't compare soups on a slurp-for-slurp basis. You picked a different experience the moment you ordered French Onion. Don't get rattled if somebody at the table shows you up with a girthy chowder.

- One word we throw around a lot is Caramelization. I need to know these ingredients had to grind their way into the bowl, and the only way to do that is with a slow cook and plenty of patience with the onion. Don't rush that shit. Make the onion bleed its way into bold new flavor. If you commit the time then the rest takes care of itself, and this bowl shows us exactly why.

- The broth has come to life. You can tell because it's in a fist fight with the melted cheese creating alternating sea-levels. Credit to the iceberg level bread that's showing you just enough on the surface to suggest monster growth underneath. That's a critical visual as you navigate the ever-important first few spoonfuls. You can easily get bread, broth, onion and cheese all working together deep into your bowl, and that's when you know you've got good balanced French Onion. It should always strive to minimize the spoon-to-spoon volatility.

- Cheese is the fastest way to make or break your bowl. One glance at a half-assed effort will send your review south. Conversely, a broad blanket of the good stuff can just as easily mitigate lackluster blocking & tackling. In the present case, it's not exactly clear how strong the cheese profiles. There's coverage on the outer rim but gaping holes in the heartland of the soup. Browning in the right spots but sloppy on the bread apexes. Even so, you can tell this bowl is subject to profound broiling. Not just a casual blow torch but rather full immersion on the top rack of a commercial convection oven. Simply put, the cheese is working its ass off here.

- The end result is a hard earned bowl of soup. Not just for the end consumer, but going back to the first person slicing the onion. Each and every pair of hands that touches this French Onion should be proud of their efforts. Maybe not the most aesthetically pleasing at first glance, but given the appropriate consideration, it's obvious this is Tier-1 French Onion Soup. From the establishment to the table to the napkin dressing that's begging you to get sloppy on the last 15-20% of the soup. Everything about this bowl tells me that I would love this experience start to finish, which is no surprise considering the source. Large knows his shit and would NEVER put himself in a position to eat (much less entertain) a substandard bowl of French Onion. I want to be objective but it's hard to overlook these known variables given the task at hand.

- I think there's room for improvement but we're really splitting hairs. The authenticity mixed with the traditional factors and all the things I love about French Onion are on full display. The cheese could give me a better visual but that's before you consider its relationship with the other ingredients. Under the full microscope this is a superb bowl of French Onion which should surprise no one because Large ordered it.

- There's your French Onion report. Take it or leave it.