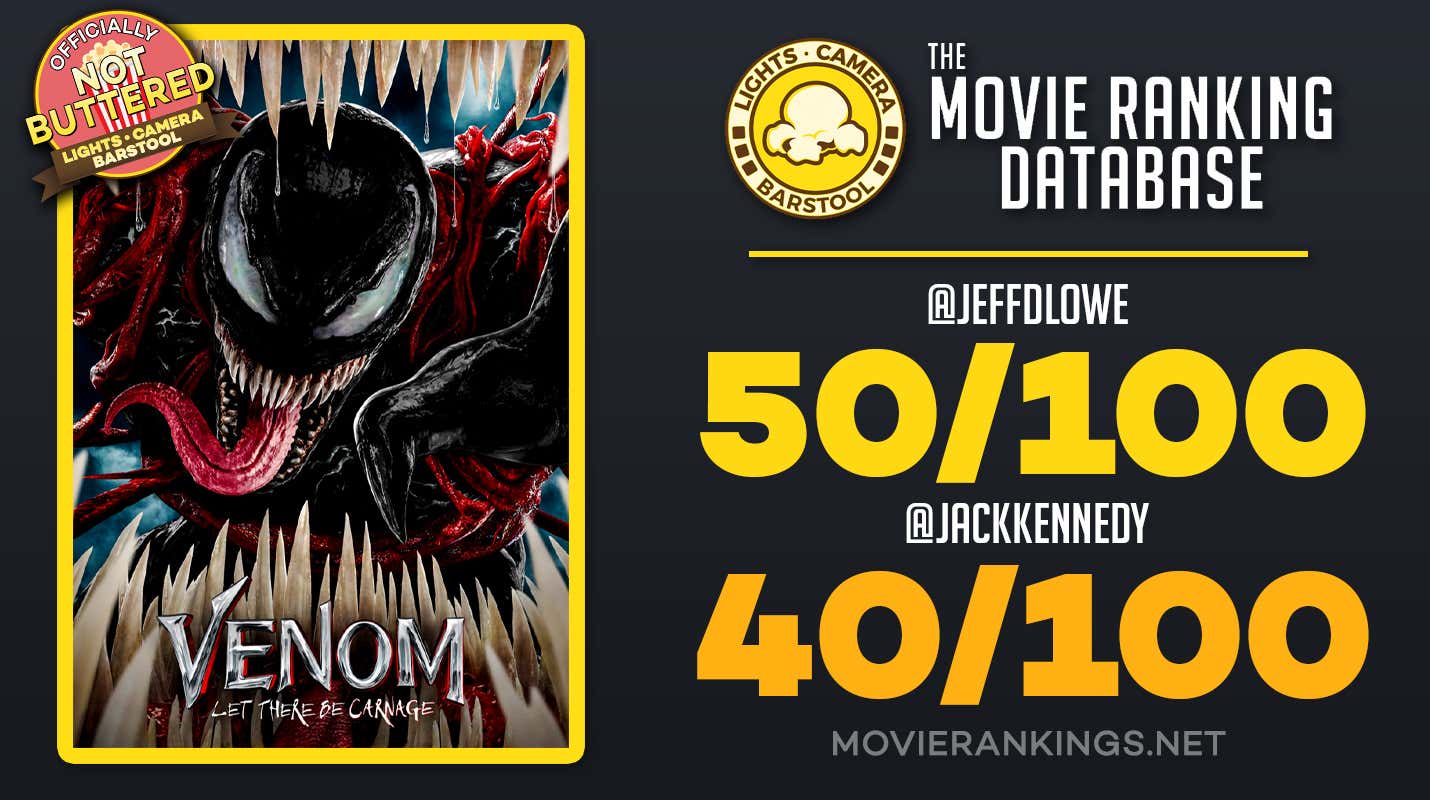 'Venom: Let There Be Carnage' is finally here and it was uh… it was an odd movie!

After finding a host body in investigative reporter Eddie Brock, the alien symbiote must face a new enemy, Carnage, the alter ego of serial killer Cletus Kasady. (via MovieRankings.net)

JeffDLowe (50/100): I won't pretend to be a big Venom fan or anything, but man, I really didn't like 'Venom: Let There Be Carnage'. My expectations were low, and the sequel was somewhat passable, but this movie was a massive flop.
- The runtime being ~90 really torpedoed this movie
-- Andy Serkis told us this was the intention, but I don't think it worked
-- The lack of character development for the villains was a big detractor
- Carnage is a major, powerful player in this universe and he felt reduced
-- Which is crazy, because this still felt more like a Carnage movie than a Venom movie
- The dialogue and humor didn't quite hit as much as the first movie, either
-- I chalk this up to a lack of letting the script breathe in a jammed movie
- Some of the acting was crazy clunky
-- The Tom Hardy & Michelle Williams dinner scene was shockingly rigid acting

The best way to describe 'Venom: Let There Be Carnage' is by calling it a "jumbled, chaotic mess." A shorter, frantic story around wild characters is a good idea, but the movie really stunts the characters from ever having a moment to breathe on screen.

KenJac (40/100): This is a frantic, sprint-to-the-finish movie which makes it almost hard to traditionally review. So instead, here are some pros and cons:

PROS
- Funny.
- Still, solid humor and good gags, the odd couple relationship between Brock and Venom made me laugh and had very solid moments
- The action looked fine, although that final fight just felt underwhelming
- Hardy was as solid as he was in the first movie

CONS:
- It is way too fast, especially in the first act
- There is a lot of stuff that feels unexplained? How did Kassidy know so much about Brock and why did he give a shit if he wasn’t aware of the symbiote
- The fact that this ended up being symbiote vs symbiote made it feel like a rerun of the first.
- The addition of Shriek felt pointless
- The way they had Woody play Kassidy felt uninteresting. It wasn’t particularly scary, and since he is a very 1D bad guy he just needed more intrigues

Here is a parallel I thought of after watching this which I think is the big takeaway for me: Cinematically, Venom is a character that I associate with Deadpool. Very rabid fanbases, antihero sentiment, disassociation from the mainstream of the MCU, and lead actors that are now very tied up with the character. I think Deadpool, so far, has leaned into being different. Venom has kind of tried to do both. It wants to be a conventional superhero story with PG-13 sensibilities, but had an appealing edge to it that feels rated R. I think trying to satisfy both those parties has hurt it a lot, and hopefully, the SPOILER ALERT* induction into the MCU gives the character a little more of a concrete vision.

--
The movie is Officially Not Buttered and is a must-see for all Marvel fans. See it in theaters! Go to the movies! Have fun! You can head to Lights Camera Barstool right here to listen to our latest episode where we discussed the movie in full.